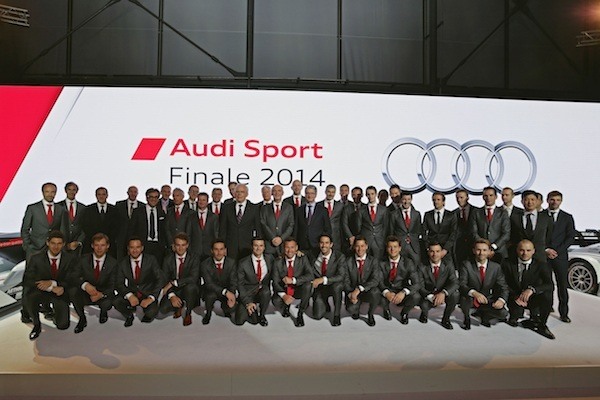 The Audi Forum in Neckarsulm hosted the traditional closing event of the season, as the 2014 Audi Sport Finale welcomed over 500 guests through its doors to relive the moments that saw the Ingolstadt manufacturer triumph in various different racing series. This was as well as seeing the final and very emotional appearance of Le Mans legend Tom Kristensen as an Audi factory driver, as he said his goodbyes.

“The entire team can be proud of having clinched another victory at Le Mans for Audi in the face of very difficult boundary conditions,” explained Rupert Stadler, Chairman of Audi’s Board of Management. “There’s no other automobile manufacturer that can show such a track record in the world’s most important endurance race.”

Audi also were successful in reclaiming the manufacturer’s title in the Deutsche Tourenwagen Masters (DTM) from BMW Motorsport, as their eight cars took advantage of a somewhat difficult showing from their Munich rivals, turning a twenty-one point deficit around to win the Constructors’ by thirty-one points at the end of 10 races.

“The manufacturers’ title means a lot to us,” stated Prof. Dr. Ulrich Hackenberg, Member of Audi’s Board of Management for Technical Development, which showed Audi’s strength in numbers when it came to a combined team effort. “Obviously, in 2015, we’re set on recapturing the number ‘1’ for one of our cars. There’ll be more races and many other changes that should be of benefit to the DTM as an event. At six DTM rounds, as an additional bonus in a manner of speaking, we’re going to offer the fans our new Audi Sport TT Cup that so far has surpassed all expectations we’ve pinned on the new one-make cup.”

Audi Sport’s Customer Sport Racing outfit, which has supplied many teams across the globe to compete in a lot of high profile championships, has helped the R8 become one of the “tour de force” racecars in the world of GT racing.

“This success has been guaranteed by our Audi R8, which provides an ideal base for use in GT racing,” said Member of the Board of Management for Marketing and Sales of Audi AG, Luca de Meo, as the R8 LMS has secured 15 titles and multiple victories in Australia, Asia, North America and Europe.

“At the moment, there is no other GT3 racecar in the world that features as many details and parts from the production car as the R8. The technology transfer between motorsport and production can hardly be any more direct than this.”

The brand took home the glory from the three most recognized 24-hour races in the sportcar calendar, the 24 Hours of Spa, Nürburgring and Le Mans, which took place over a 42-day period, which is a feat that a lot of manufacturers have not yet achieved.

The final event of the evening was a fond and emotional farewell to Kristensen, who took part in his last sportscar race at the season finale of the 2014 World Endurance Championship in Brazil a few weeks ago.

The Dane was called “one of the greatest race drivers if all time, who will not only be missed by Audi” by Audi Motorsport Head, Dr. Wolfgang Ullrich, during the latter’s congratulatory speech, which echoes the sentiments of all that have followed his career over the years.

Kristensen was presented with the Audi R18 e-tron quattro, in which he had secured the 2013 FIA World Endurance Championship, which brought to an end his eclectic career under the brand with the four rings.