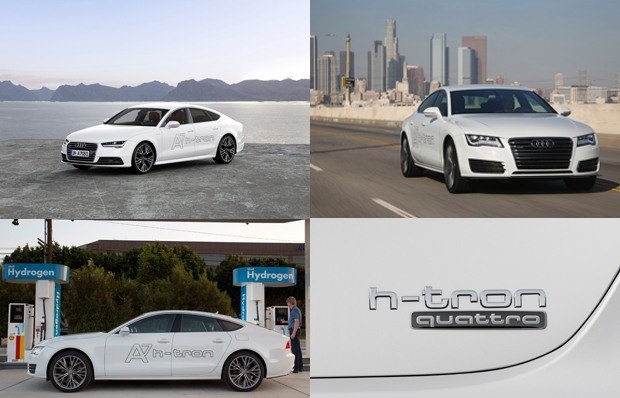 Unveiled at the LA Auto Show, the A7 Sportback h-tron quattro is a concept car that uses a powerful electric drive with a fuel cell as its energy source and is able to conceivably cover 310 miles on one tank of fuel and only emit nothing from its exhaust save for a few drops of water. This is because of the fuel cell technology that is used in combination with a hybrid battery and an additional electric motor in the rear, making the emission-free Audi A7 Sportback h-tron quattro a quattro through and through with nearly as much power (170 kilowatts) as a petrol version.

“The A7 Sportback h-tron quattro is a genuine Audi – at once sporty and efficient. Conceived as an e-quattro, its two electric motors drive all four wheels,” explained Prof. Dr. Ulrich Hackenberg, Member of the Board of Management for Technical Development at Audi. “The h-tron concept car shows that we have mastered fuel cell technology. We are in a position to launch the production process as soon as the market and infrastructure are ready.”

The “h” in the name h-tron denotes the chemical element hydrogen, and helps distinguish the Audi A7 version as it sits proudly alongside the other Audi models with alternative drive principles, the e-tron and g-tron, with the vital differences sitting underneath the bonnet. 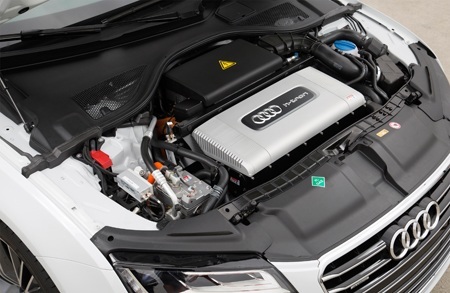 This is the fuel cell, replacing the conventional A7 Sportback combustion engine, and comprising over 300 individual cells, the core of each a polymer membrane, formed together in a stack.

Here’s where the clever stuff (the chemical bits) happens. “Hydrogen is supplied to the anode, where it is broken down into protons and electrons. The protons migrate through the membrane to the cathode, where they react with the oxygen present in air to form water vapour. Meanwhile, outside the stack the electrons supply the electrical power – depending on load point, the individual cell voltage is 0.6 to 0.8 volts.”

Got that? Understand that? If not; all you need to know is that the entire fuel cell operates in the voltage range of 230 to 360 volts, is made up of the cells, a turbocharger that forces the air into the cells, the so-called recirculation fan that returns unused hydrogen to the anode to increase efficiency, and a coolant pump (all powered by the fuel cells.)

A special feature of the A7 Sportback h-tron quattro is that the concept is a plug-in hybrid - a logical evolution from the Audi A2 H2 and Q5 HFC test cars – with a rechargeable lithium-ion battery on board (beneath the boot) with an 8.8 kWh energy capacity that has been adopted from the A3 Sportback e-tron. 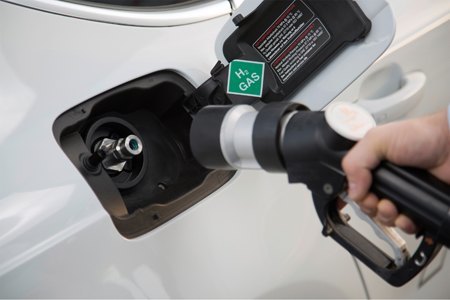 This high performance battery works as an ideal partner to the fuel cell because it can store energy created through braking and supply considerable power for full load boosting. This in turn allows for some serious acceleration, which means that the A7 Sportback h-tron quattro is really able to live up to its quattro billing.

Just using the power created by the battery, the Audi A7 Sportback h-tron quattro is able to cover as much as 31 miles with the battery in the rear of the plug-in hybrid rechargeable by lead in either 2hrs (using an 360v industrial power socket) or 4hs using a 230v domestic socket.

There is a DC converter (DC/AC) between the two the battery and the fuel cell as they operate at different voltage levels, and this is located behind the stack, equalising the voltage to allow the electric motors to operate at their maximum efficiency of 95%.

According to Audi, driving in the Audi A7 Sportback h-tron quattro is the real deal when it comes to electric cars with the silent propulsion available in full right from the off, with the fuel cell reaching its maximum output within one second at full load. This is quicker and more dynamic than a normal combustion engine because the entire drive system involves only a few mechanical components.

The Audi A7 Sportback h-tron quattro has 540 Nm (398.3 lbft) of propulsive power at its disposal, with a top speed of 111mph and racing from a standstill to 62mph in only 7.9 seconds, offering a dynamic, stable and high-traction drive that is comparable to a production car with mechanical quattro drive. 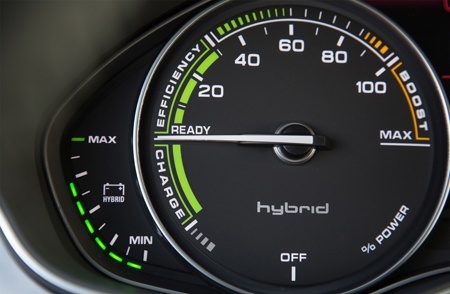 In the cabin, the driver is able to keep an eye on the power flow thanks to a power meter replacing the rev counter in the instrument cluster, with other meters and sections showing the fuel level in the hydrogen tank and the level of battery charge; and the driver is able to travel on battery power only by pressing the EV button.

Switching from automatic transmission mode D to S increases the level of energy recovery when braking, so that the battery is charged up effectively when the driver is feeling able to be sporty when driving with the electric motors acting as alternators, converting the car’s kinetic energy into electrical energy that is stored in the battery.

When it comes to refuelling with hydrogen, using the tank flap is in the right side section of the five-door coupé, fully refueling with H2 takes around three minutes, roughly as the same as a conventional automobile. The four hydrogen tanks of the Audi A7 Sportback h-tron quattro are located beneath the base of the boot, in front of the rear axle, in the centre tunnel, and can store around five kilograms of hydrogen at a pressure of 700 bar – enough to drive for around 310 miles.

But like the Toyota Mirai, the cars may have problems finding fuel stations that have hydrogen pumps – but as fuel cell cars grow, so will availablility)

And if that’s the only problem, then that is fixable very easily.

Audi’s long-term goal is CO2-neutral mobility – and the A7 Sportback h-tron Quattro is one giant leap forward.