“With our Audi TT quattro sport concept show car, we wanted to demonstrate what the new TT’s technology can do if you take it a step further,” explains Prof. Dr. Ulrich Hackenberg, Audi Board Member for Technical Development. “This car is designed for racing – an extreme driving machine for the motorsports enthusiasts among our customers.” 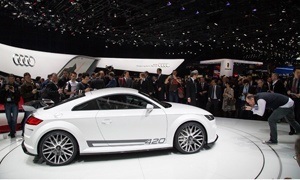 If, as Dr Hackenberg says, the Audi TT Quattro Sport is designed for racing, you would expect there to be something pretty amazing under the bonnet.

And with all that power behind it, thanks to pared back interior trim and equipment, advanced Audi Space Frame construction and extensive use of aluminium throughout the car, the acceleration on the Audi TT Quattro Sport Concept is an astonishing 0-62mph in just 3.7 seconds. 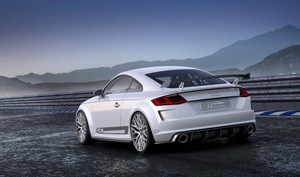 Needless to say, the team at Audi working on Powertrain Development have worked hard on the concept and, as their Head, Dr. Stefan Knirsch, says: “This high-performance power unit is an impressive demonstration of the power reserves available in our EA888 engine range. This power unit has received numerous awards all over the world and it already lives up to its claim in many Audi sporty models. In the TT quattro sport concept, it demonstrates its full power potential. The thirty-five years of experience we’ve gained in the field of turbocharging are manifested in this engine’s unique combination of maximum performance, dynamism, and fuel efficiency.”

All throughout the engine there are little touches that mean so much to the performance improvement.

And as we said, there are 4 cylinders, with the cylinder head has developed and improved with the knowledge that it is going to be working a lot harder than in the past with higher loads and increased gas to contend with – and the highly compact thin-wall cylinder crankcase has also been strengthened with a high-strength cast alloy in view of the higher power output that it will be dealing with.

To help with the workload, Audi designers have inserted an exhaust-gas turbocharger that produces up to 1.8 bar of charge pressure.

When the driving starts, that’s when the 4-cylinder unit comes into its own. The turbocharged direct-injection engine responds immediately to the throttle and revs eagerly right up to the fuel cut-off at 7,200 rpm, before transferring its torque to a compact, three-shaft S tronic dual-clutch transmission which shifts gears in split-seconds. Sounds impressive; and it is!

The Audi TT Quattro Sport also has a permanent quattro all-wheel drive system that is hydraulically actuated with an electronically controlled multi-disk clutch located on the rear axle to ensure that all weight is evenly distributed.

Keeping in with the racing car ideals, the chassis is nothing short of cutting-edge. It contains a MacPherson suspension with aluminium components at the front and a four-link layout at the back to help the Audi TT Quattro Sport concept’s handling, keeping it sharp and ultra-precise, and then there is the near-perfect 54-46 per cent weight distribution and a set-up stiffness that brings the whole body of the car closer to the road than the run-of-the-mill series-production TT (If an Audi TT could EVER be called ‘run-of-the-mill.)

Technology helps too with the ESC electronic stabilisation control (that can be partially or fully deactivated) and, when cornering, wheel-selective torque control (where, if it is needed, drive torque is transferred from the wheels on the inside of the bend to those on the outside to push the car very slightly into the corner.)

The hybrid construction of the Audi TT Quattro Sport, based on the MQB modular transverse matrix, is part of the latest evolution of the Audi Space Frame (ASF) with the car’s centre of gravity nice and low to help with aerodynamics.

Although there is a lot of aluminium about, the front end is made of steel with the passenger compartment floor made up of high-strength, hot-shaped steel components too – all of which combine with the semi-finished aluminium compartment’s structure, the entire exterior skin, and the doors and lids.

The Audi TT Quattro Sport Concept’s silhouette gives the entire car a sense of purpose, with the pronounced TT wheel arches (which frame 20” inch wheels with a central locking mechanism and semi-slick tyres) more pronounced by 30mm, connected by powerfully accentuated sill extensions. Also, the splitter (made of carbon fibre-reinforced polymer) and the rear diffuser stretch all the way to the wheel arches to form an aerodynamically effective contour.

The back of the car concept is where the show car’s racing character shows the most with the wide CFRP diffuser surrounding the two large, fully circular tailpipes, with large air outlets positioned on the sides beneath the taillights. 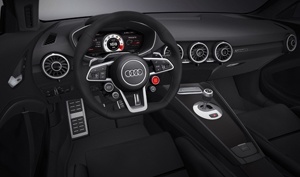 Inside the show car, the interior has been stripped back to pretty much the basics having been stripped of armrests and speakers as they would have been in a race car, with door handles also replaced (by diagonal strips of Alcantara.) The seats are low-set racing bucket seats that feature black four-point seat belts with white accentuating stripes, with the luggage compartment having space for two racing helmets – so don’t expect to see this car in the car park at Aldi! (Although you will see it in the AUDI car park.)

When it comes to the controls, the Audi TT Quattro Sport Concept follows the series-production TT with equipment that has the driver right at front-of-mind. By this we are talking a compact racing steering wheel with the spokes home to the red start/stop button alongside the keys and rotary buttons for operating the Audi virtual cockpit. And the 12.3” fully digital instrument cluster is designed for simplicity too!

See you in the car park with the shopping then!