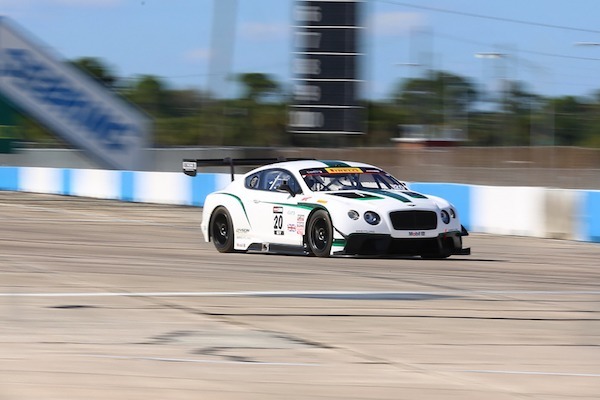 The 2015 Pirelli World Challenge kicks off this weekend at the Circuit of the Americas, which will see Bentley Team Dyson Racing start its first full season in the championship, having only competed in a part season campaign in 2014.

With Chris Dyson and Butch Leitzinger named as the team’s drivers for this year’s assault on the championship, the pair are looking to help build on the successes from 2014, which included multiple front-row starts, two podium finishes and a race win.

CEO and Team Founder Rob Dyson said that the racing the team did last year was to analzse many different aspects of the series itself, which included the competition, as well as how the Continental GT3 coped with the format that the World Challenge has every weekend.

“It was clear from our first race weekend at Elkhart Lake, where Butch Leitzinger set the second-fastest lap in each race, that the car was good, the competition was keen, the races were hard-fought, and the series was very well run,” he said, especially with the car taking its first win across the pond at Miller Motorsports Park later on in the season.

But the team knew that developments towards a full campaign was needed to keep up with what the competition were doing, as well as making the Continental GT3 unleash its full potential for 2015. This included the fact the car needed to be working better on the standing start formats during race starts, where the Bentleys were being left behind going into the run down to the first corner.

“This is the only series that the Continental GT3 competes in where the race starts with all the cars standing still on the grid.  So in 2014, it’s not surprising our competitors’ had more thoroughly developed launch-control software,” Dyson said. “We were strong in qualifying, but we were getting out-raced to the first corner and with a race that lasts just 40 to 50 minutes and often on tracks where it’s tough to pass, that’s a not insignificant handicap.”

Leitzinger returns for his 21st season with the Dyson Racing outfit, and has won three championships with them, which includes 34 wins, two of which came at the iconic 24 Hours of Daytona. The American, who will be running the #20 car, also finished 1st in the LMGTP class at the 24 Heures du Mans in the Bentley EXP-8 alongside Andy Wallace and Eric van der Poele.

Chris has won two American Le Mans Series drivers’ titles in 2003 and 2011, whilst taking the runner-up spot in both 2005 and 2012. He will take his place behind the wheel of the #16 car, having been suitably impressed with the Continental GT3 during the first time he drove the car at Sebring.

““I was very pleased with how much downforce the Bentley makes, particularly in high-speed corners,” said the 37-year-old. “GT3 cars are quite physical to drive, so I’ve been doing the same training I would do if I were driving an LMP car.”

The New York native was also brimming with confidence about the fact that the cars will be on a better level, in terms of competitiveness this year, something on which Leitzinger agrees with.

“Right from our first race last year it was so much fun,” explained Leitzinger, which was due to the fact that the “Bentley was so good from the beginning. And it's a really fun series to be in with lots of action. The driving level is good and people are tough and fair so you are able to really joust with people and enjoy the racing.”

With a twelve race weekend schedule for those that are competing, which ends in the middle of September, the Bentleys of Team Dyson could be ones to watch when the action gets underway this weekend in the Lone Star State.