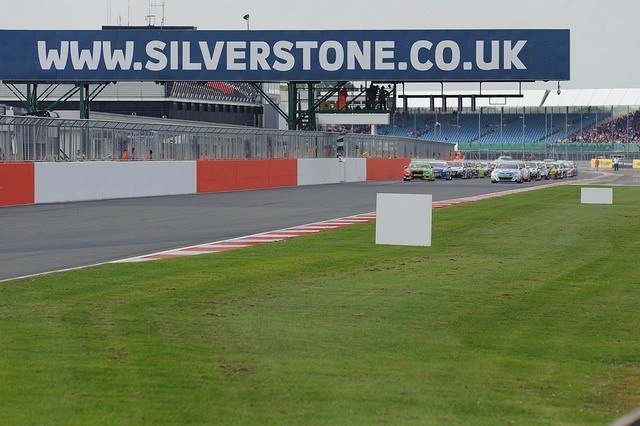 The drivers all lined up, ready for the lights to go out

The Home of British Motorsport hosted the penultimate round of the 2014 Dunlop MSA British Touring Car Championship this past weekend, as eBay Motors’ Colin Turkington had one hand around the drivers’ title. The trackside action could see resurgence from chief rival Jason Plato, who sits 55 points behind the consistently successful Ulsterman, who took his first BTCC title back in 2009.

Honda Yuasa Racing’s Gordon Shedden is also in the mix, as the 2012 champion would be looking to capitalize on any mistakes made by either Turkington or Plato on the Silverstone National Circuit. But the main factors that could help ignite the title fight towards the finale at Brands Hatch would be both Plato’s success at the track and the top speed of the pair of Triple 888-prepared MG 6s.

However, before the on-track action got underway, a major storm emerged involving comments made by Team Dynamics’ Matt Neal during the last race weekend at Rockingham.

After Championship Administrator Alan Gow’s initial request for the matter to be investigated, the team was found to be in breach of Clause 7 of the TOCA BTCC License (TBL), which states about bringing the Championship, TOCA officials and organization into disrepute.

However, due to the team’s long-standing commitment with the series, Team Dynamics was fined £25,000, with both TBLs revoked. The penalties have been suspended until December 31st 2015, as long as no further infractions take place. Neal, himself, has since made an apology in reference to the comments that he made, and understands that his comments were unacceptable.

Nevertheless, it was time for the drivers to put on the racing suits, helmets and boots, get strapped into their turbo-powered chariots and wait for the lights to go out in Northamptonshire. 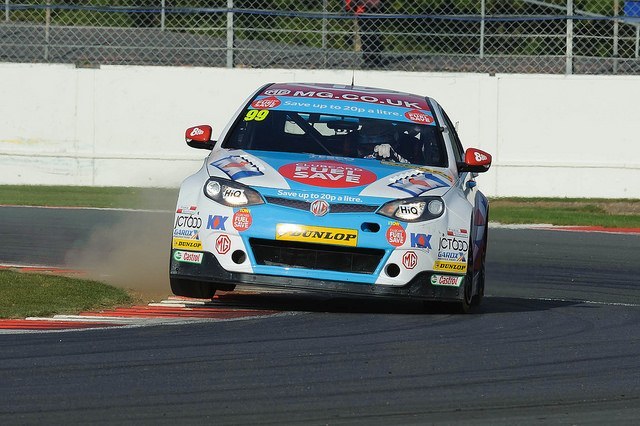 No one had an answer for Plato (Image credit: Network Images/Dennis Goodwin)

During a sun-filled Saturday afternoon, MG KX Clubcard Fuel Save took the penultimate pole position of the year, as Jason Plato made the best of the early goings and made sure that he was at the head of the field for the first race of the weekend.

The soaring temperatures steadily increased, as Plato recovered from his off-track excursion at Luffield to set the benchmark of 58.511 seconds around the National Circuit.  However, the closest man to the Fifth Gear presenter was points leader Turkington, who managed to beat Plato’s teammate Sam Tordoff into second by just 0.003 seconds.

Airwaves Racing’s Mat Jackson, fresh from a welcome win in the final race at Rockingham, drove his Ford Focus NGTC to the limit, as the 2008 championship runner was looking to extend his tally of four wins at the Northamptonshire circuit.

The Team BMR pairing of Arón Smith and Alain Menu locked out row three, as the VW CCs the team have were showing impressive straight-line speeds throughout practice and qualifying. The other two VWs of Warren Scott and Jack Goff were able to manage 13th and 14th respectively, as Speedworks’ Tom Ingram again showed his consistent performance with another top ten spot, placing seventh.

Quantel Bifold’s Marc Hynes took eighth in his Triple 888-prepared MG, ahead of WIX Racing’s Adam Morgan and Exocet Racing’s Rob Austin, who were pushing each other forward up the order during qualifying. Rob Collard pipped Crabbie’s Racing’s Jack Clarke, who was running at 9th at one point. Fabrizio Giovanardi had struggles throughout the session, and was only able to muster a paltry 19th.

Defending champion, Pirtek Racing’s Andrew Jordan, along with the Yuasa Honda pairing of Neal and Shedden, struggled along with the Italian, as the trio placed 16th, 17th and 18th after the dust had settled. They all found themselves behind the weekend’s birthday boy, Aiden Moffatt, who celebrated his 18th birthday.

It was another tight qualifying session, as the top 23 drivers were split by less than a second, but AmD Essex’s Dave Newsham suffered the biggest drama, having spun off track and hitting the barriers, which left the team a lot of work ahead of race day. 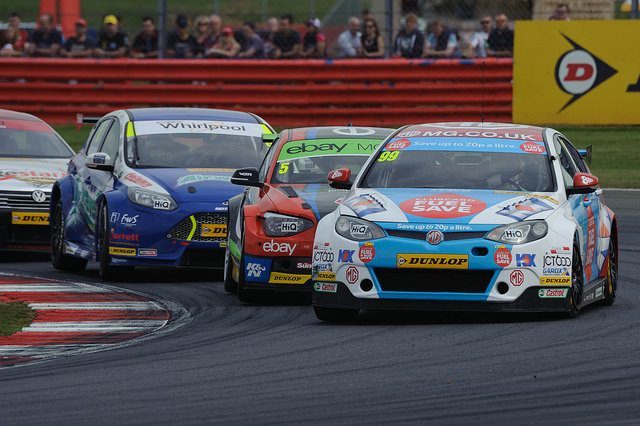 The first race saw Plato keep ahead by a whisker

Jason Plato took another step to keeping in touch with Colin Turkington by taking the win in the opening race of the weekend, with the Ulsterman initially seizing the advantage into turn one ahead of the MG driver.

Turkington would have to settle for second place, as Plato went for the lead with a brave overtake into Brooklands on lap 3 and never looked back. Mat Jackson would round out the podium, just over 1.5 seconds off winner Plato. Tordoff would end up fourth, after Jackson’s Focus bolted off the start.

The early stages saw the top six split by no more than a second, with battles up and down the order. Jackson could have been in with a chance of passing Turkington, but had to settle for his spot on the rostrum.

Tordoff didn’t have things easy, as the youngster had to fend of the Team BMR duo of Menu and Smith, making it count at the very end. Rob Collard was able to take advantage of the melee that occurred in the fight for seventh place. Marc Hynes had to settle for eighth, with Rob Austin and Andrew Jordan rounding out the top ten.

Ingram’s race ended after going into the gravel just off Copse, after having traded paint with Shedden twice, as well as the likes of Clarke, Neal and Giovanardi having their fair share of rubbing throughout proceedings. 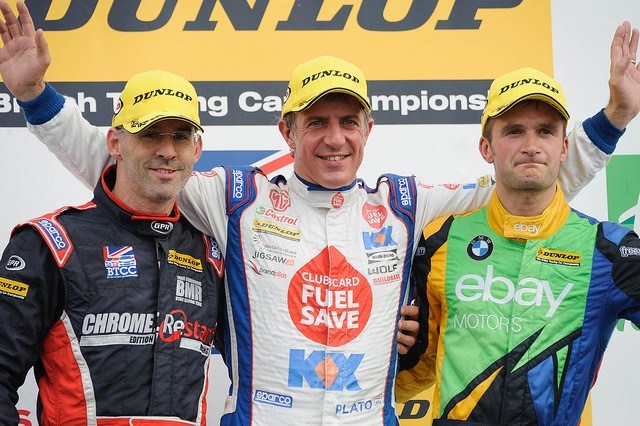 The second race was again dominated by Plato, who was able to fight his way past Turkington at Brooklands again on lap 2 in an exact copy of the pass he made on the Ulsterman in race one.

Plato took the win from his chief rival by around a second, with Menu and Smith taking home a Team BMR 3-4 ahead of a fading Mat Jackson.  However, the race was cut short due to a dramatic accident, that saw eBay Motor’s Rob Collard’s BMW roll after contact with Jack Clarke coming out of Becketts, which brought out the red flag.

The Crabbie’s Racing rookie was sliding out of the corner, and caught Collard’s car on the left rear, sending the WSR-prepared 125i M Sport into several rolls before it came to rest. Collard was shaken up and winded after the crash, but was found to be fine after being taken to the medical centre for checks.

Tordoff took sixth ahead of Giovanardi, with Andrew Jordan taking another top ten finish in eighth place, with Warren Scott and Jack Clarke completing the top ten after a titanic battle for the last two spots in the top third of the grid.

The race also saw Turkington wrap up the independent drivers’ title with just four rounds left, but the Ulsterman was further focused on the bigger picture: “I struggled a bit at first on the softs but in the end it turned out just like race one. It’s great to wrap up the Independents’ but our full focus is still on the big one.”

Race 3: Jackson Takes The Win Ahead Of Champions’ Battle 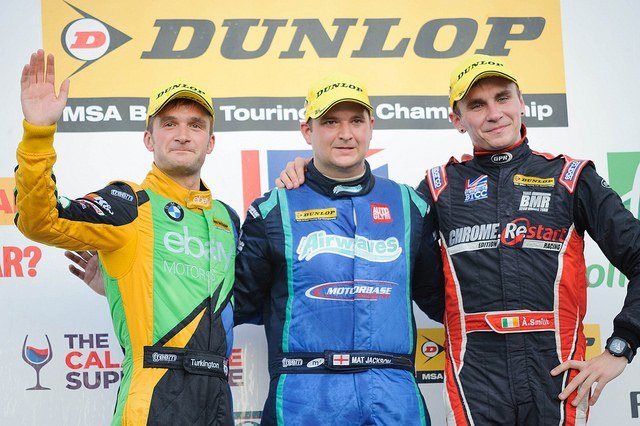 Giovanardi may have been selected by Clarke to be on pole position for the reverse-grid finale of the day, but it was Mat Jackson that streaked away into the distance and took the final race win of the weekend.  The Airwaves driver finished ahead of a lonely Arón Smith, with Colin Turkington coming out on top of a battle between five different BTCC champions.

The Safety Car made an appearance during the race, following an incident that included Martin Depper, James Cole and Robb Holland, taking all three drivers out in the process. Smith overtook Giovanardi for second on the restart, meaning that the Italian had to keep the rest of the field behind him to secure a podium finish.

However, it was not to be, as Turkington and Menu were waiting to pounce, as the former swapped paint with the two-time champion over the finish line in lap 19. The Swiss Team BMR driver took advantage of the pair’s squabble to go up the inside of them into Copse.

Plato got into the action at Becketts, before tapping the BMW into Giovanardi, which bumped the Airwaves driver down the order after a great save. Jordan was also there in the latter stages, but Turkington prevailed in third, followed by Plato, Menu and Jordan, with Morgan and Shedden finishing 7th and 8th.

It was a landmark moment for Team BMR, as Warren Scott and Jack Goff completed the top ten, which saw all 4 VWs take top ten positions for the first time in the BTCC. Scott also rounded off his best weekend yet with ninth, ahead of Goff.

After what had been a dramatic weekend, the scene is now set for the title fight to go down to the wire at Brands Hatch, with both Turkington and Plato the two drivers that are in with a good chance of taking another title.

Turkington has a 50-point advantage over Plato, as the Grand Prix circuit will see a new champion crowned, as Andrew Jordan’s defence has come unhinged after two disastrous weekends at Snetterton and Knockhill.

Tony Gilham will also return to the BTCC in the Rotek Racing Audi S3 in place of Robb Holland, whose last outing of the season was marred by the accident in race three. The American driver has a prior engagement, which sees the Team HARD boss take to the wheel for the first time since the end of the 2012 season.

Glory awaits the fearless and the brave, as well as those that can keep out of trouble. But could the weather again bring a surprise to the table, and shake things up in the process the weekend after next? Anything can happen in the BTCC… and it normally does.