Mercedes & Ciceley Team Up For BTCC 2014 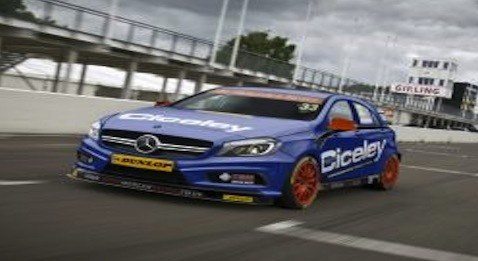 The breadth and depth of manufacturers that line up currently in the BTCC under the new NGTC regulations will receive another member to the family, as Ciceley Racing, who retain the services of current driver and former Ginetta GT Supercup Champion Adam Morgan, will be running a new Mercedes-Benz A-Class under the new regulations after two years of running with the Toyota Avensis.

This makes a welcome alignment in the camp, due to the fact that the team is sponsored by Ciceley Commercials, who are a Mercedes-Benz Truck & Van dealership, who are sponsoring a Lancashire team that has been competitive from the time they started in competitive motorsport with a Mercedes-Benz 190 in the 1980s, winning the Manx Rally in 1986 and 1987, with current team principal Russell Morgan behind the wheel.

Race wins are now a target for the team, who are currently building the A-Class at their base in readiness for next year, with the current Avensis that Adam has raced this season being up for sale at the end of the season. The car which has helped Morgan to seventh in the overall standings will be a worthwhile proposition for any driver wanting a car that has shown how competitive it can be when it hits the track with the right set-up.

The shorter wheelbase of the car will be able to provide a good solid base for the team, which will help with the front-wheel drive characteristics of the vehicle upon set-up and track variances with the knowledge that the team already has from two years of NGTC experience. The rise of the hatchbacks is coming to the BTCC, and shows that such a premium brand can be so well represented by Cicely Racing, especially with the ties it has to Mercedes-Benz through its title sponsor.

Team principal Morgan said that the move to the German brand was the right call, especially with the fact that the success WSR Racing have had with their 125I M Sport has proven that hatchback-derived NGTC cars are a powerful force that are to be reckoned with, as Colin Turkington returned to a championship he won in 2009 and has kept in the hunt for the title, having secured 5 wins and 6 podiums and currently lies third with 305 points, as the championship approaches the penultimate race weekend at Silverstone. He was, however, quick to thank Toyota for all their efforts over the past two years: “I’d like to take this opportunity to thank Toyota for all of their help over the last two seasons, hopefully we can end what has been a brilliant debut season for the team on a high.”

This effort by Ciceley means that another welcome injection of new life will be brought into the championship for next year, as BTCC Series Director welcomed their efforts of being able to showcase the fact that the technical regulations for the NGTC class are adaptable. It also is a strength of the team as Gow said: “The team are able to change from racing a Toyota and onto developing and racing a Mercedes-Benz, whilst utilizing the vast majority of the NGTC components they already possess.”

In all honesty, it will make the championship more exciting, as Renault will also make its return to the series for the very first time with two customer cars in the form of the Megane 3. Welch chartered engineer Philip Morgan, whose son Alex currently races in the Renault Clio Cup, will be building two cars through his MDA Wheels business, and hopes to have both cars ready for testing programmes by November this year.

The action still is happening this coming weekend with the Dunlop MSA British Touring Car Championship continuing at the “Home of Motor Racing,” Silverstone, for Rounds 25, 26 & 27 of the 2013 season, where Andrew Jordan comes into the penultimate round with a 30-point advantage, as the finish line is in sight for those gunning for the title…