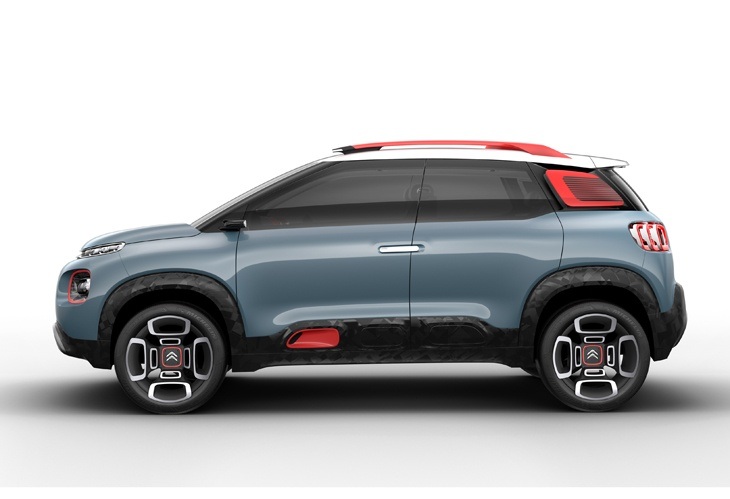 At the Geneva Motor Show,  Citroën unveiled a daring new concept car with a strong and colourful identity in the shape of the C-Aircross Concept. 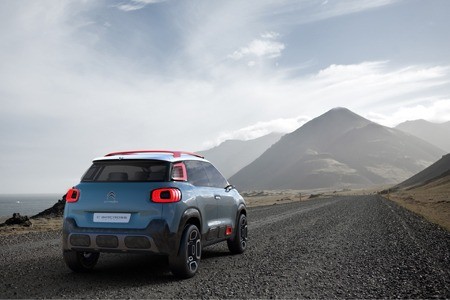 Ready to conquer the world, this internationally-oriented interpretation of a compact SUV is a step up from the 2015 Aircross concept that has resulted in the C3 Aircross due this year, a car that has inspired this new concept.

"The C-Aircross Concept demonstrates Citroën's pursuit of its international product offensive. Based on the state-of-mind of New C3, it illustrates a different vision for the compact SUV segment, full of confidence and boldness. This concept also embodies the ambitions of the Citroën Advanced Comfort® programme, making its interior space a source of well-being." -  Linda Jackson, Citroën  CEO

The modern design of the C-Aircross Concept offers the feeling of robustness and energy, whilst at the same time being part of the everyday traffic without being aggressive. Protective trim on the lower parts of the body combines with smooth surfaces and bold graphics to create a seamless, flowing line along the compact . 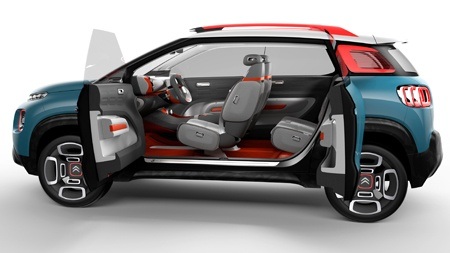 Blue body paint contrasts elegantly with Fluorescent Coral highlights, with brightly coloured personalisation elements around the headlights, on the wheels, on the side guards and on the roof bars – which also incorporate LED lighting at the front.

The C-Aircross Concept certainly isn't lacking in presence with a short and raised bonnet, a sturdy front end, assertive, reassuring lines and moulded panels, the front and rear protection shields with a glossy black finish ensuring that the car is always ready for adventure suggest that off-roading won't be a problem either.

When it comes to lighting, the C-Aircross Concept inherits the C3's split level light signature at the front, with daytime running lights integrated into the grille, and 3D lights at the back.

There are also air inlets incorporated into the front bumper and side door guards to help with the cars aerodynamics. 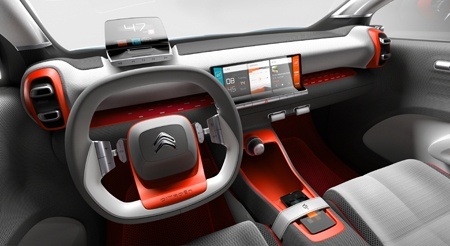 The C-Aircross Concept features ‘opposing opening doors’, the rear-hinged doors at the back for better accessibility, something already incorporated into the Aircross and CXperience concepts. And when it comes to the light grey and orange-coloured dashboard, Citroën’s designers opted for creating it in an elevated one-piece, the interior also enhanced by the suspended and raised seats that offer up an impression of fluidity, modernity and space.

Other interior features include: 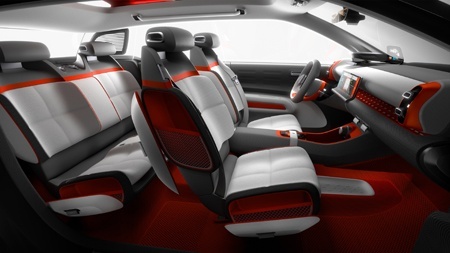 The SUV-style C-Aircross Concept is obviously well-versed in everyday driving, but is also equally at home when it comes to mountain and coastal getaways. The car comes with a Grip Control dial built into the central console for a more versatile drive, and this particular smart technology is designed with 5 operational modes:

STANDARD: This is for use on normal road conditions such as main roads, motorways and urban roads

SAND: This mode uses the two front wheels simultaneously to reduce the risk of getting stuck in sand or on soft ground

OFF-ROAD: This mode acts as a Limited-slip Differential and ensures optimum traction on slippery surfaces such as mud, wet grass or dirt roads

SNOW: This mode instantly adjusts the rotation of each of the driven wheels to the grip available on snow-covered surfaces

ESP OFF: This mode allows the driver to deactivate the ESP (active up to 50km/h or 31mph)

Although still a concept, Citroen have a lot of faith in the C-Aircross concept, and are looking at a production timescale of late 2017/early 2018.