Coronel and ROAL Motorsport back together in WTCC 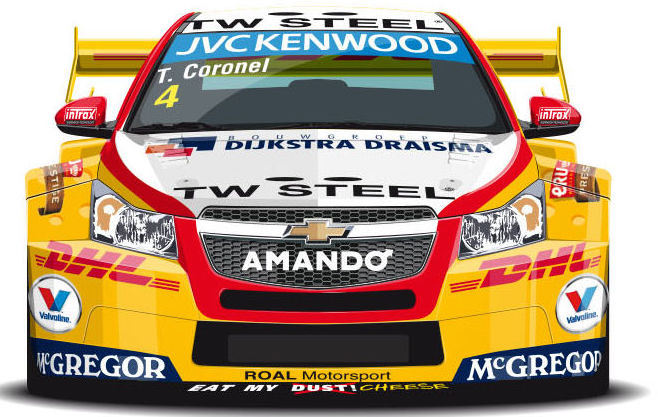 After celebrating his 25th anniversary as a racing driver, Tom Coronel will make his return to the World Touring Car Championship for the 11th successive year, and the Dutchman will once again team up with Italy’s ROAL Motorsport for the fifth year in a row.

Coronel will again pilot the Chevrolet Cruze TC1 alongside teammate Tom Chilton for 2015, and will look to build upon his tally of 222 races in the WTCC. However, the biggest change for this year’s campaign will be the livery that his car will sport: it will be predominantly yellow.

This is as a result of the close partnership that has been formed with DHL, which joins the long list of sponsors that Coronel is already working with, which includes TW Steel, Vavoline, Amando Face & Body Car, amongst others.

ROAL Motorsport, run and owned by touring car legend Roberto Ravaglia and Aldo Preo, will again look to be the best of the Chevrolet contingent on the grid. But for Coronel, there was still a lot of hard work for him to get on the grid, even with his commitments to race in the legendary Dakar rally with twin brother Tim.

“Preparations for the new year started right after the end of the WTCC season,” explained the 42-year-old. “Everybody knows how the Dakar went and I continued to work on my WTCC project as soon as I got back to The Netherlands.

“Being able to race for another season is great and I think I am one of the longest-standing drivers in the series. This will be the fifth year together with ROAL Motorsport, the team owned by Roberto Ravaglia and Aldo Preo. That is giving a lot of confidence and a good feeling. Last year, we took on the adventure with the Cruze together and we had highs and lows. In the process, we have learned a lot, which helps us to get 2015 off to a good start. From a technical perspective, the car is almost identical to last year.”

The yellow theme will continue on Coronel’s race helmet, as it will sport a cheese-inspired design like the one he wore during the Dakar, with the ERU cheese brand. So the moniker of “Eat My Cheese” will also be visible on the design of the Cruze TC1 from March this year.

The busy times are ahead of the Dutch driver, who has taken championship glory in the WTCC, as well as several wins, which include taking first place at Suzuka and Okayama, as Coronel says that Japan is his second home, having spent time over there racing professionally.

Tom headed to Barcelona, which saw the official launch of the 2015 WTCC season, after wrapping his car in the new livery at ROAL Motorsport’s headquarters in Italy: “I’ll be going back to Italy after the launch for a first test at the Vallelunga circuit. After that, the car has to be delivered to Germany to be shipped to Argentina. A tight schedule, but also a nice challenge.”

With Termas de Rio Hondo hosting the first race of the 12-round calendar at the beginning of March, Coronel is looking forward to getting back behind the wheel: “New for this year is a round on the Nordschleife of the Nürburgring and we will also have races in Thailand and Qatar. Macau is no longer on the schedule, but I think that we can look forward to a great season with the calendar for this year.”

Ravaglia, who established ROAL Motorsport with Preo back in 2001, was delighted with Coronel remaining with the Padova-based outfit for another year: “Our driver line-up for the WTCC remains unchanged. I am pleased to be able to continue the co-operation with Tom Coronel. We know him very well, as he is part of our family. Last year, he was one the best drivers of the championship, although he was forced to miss two races. We want to race at the highest level, but our target will be to compete for victories and titles in the Yokohama Trophy. With Coronel and Chilton, we have a very reliable couple of drivers."

From the action starting off in Argentina, where defending champion José-Maria Lopéz begins his title defence, until November where the sands of Qatar will see the conclusion of what looks to be another exciting year ahead. Rest assured, Coronel will be one of the drivers that will again look to take the fight to the Citröen racing quartet of Lopez, Yvan Muller, Sébastian Loeb and Ma Qing Hua.

The WTCC is set to roar back in action, as the first test showed that the French manufacturer still stays at the top, but in touring cars, anything can happen. And it usually does…