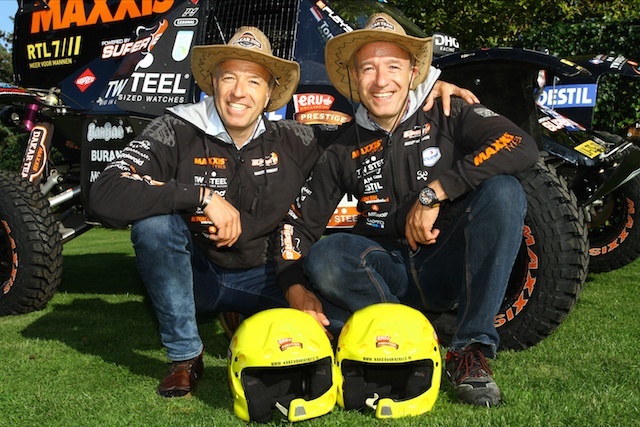 Tom and Tim reunite to race the Dakar , but will take their own paths in 2015 (Image credit: Maxxis Superteam)

The Dakar Rally, which sees competitors endure one of the toughest races known in the motorsport world every year, will have Holland’s famed racing twins taking part this coming January.

WTCC’s famous flying Dutchman, Tom Coronel, will be swapping the comforts of his ROAL Motorsport Chevrolet Cruze for the Maxxis DakarTeam powered by SuperB buggy, as he takes on a dual role next year.

His twin brother Tim, who runs the outfit, will race in an identical Susuki Hayabusa-powered Rally Raid buggy and is gunning for victory in his class, after suffering a disappointing retirement earlier this year.

The event, which starts and finishes in Buenos Aires, Argentina, will see a myriad of two and four-wheeled vehicles compete over 13 days’ worth of stages, totaling 2,350 kilometres through all the special stages that will be run.

Tom will be competing in the event, but will combine his adventures with the new role of TV host for Holland’s RTL television, which is the first registration of its kind by a media outlet in the history of the event.

The WTCC ace took part with his twin brother in a Bowler back in 2009, saying that he would never race in the Dakar again. However, Tim managed to persuade the touring car ace back to the challenging sands. The Chevrolet front-runner is intrigued by his new challenge, collecting reports whilst racing hard: “When I see an interesting item for a TV report, I will even stop.”

Tim is hoping for a better result this year, especially as the in-house designed and built buggies are 75 kilograms lighter and the Suzuki engines will produce 224bhp, with a top speed of 180 km/h: “My buggy is improving every year, as well as improvements being made with the seating position. Less weight will mean more speed, especially with using Kevlar-titanium more to help reduce the overall weight of the buggy itself.”

Tim is already looking forward to the event itself, even with months of preparation still left until the racing: “Buenos Aires is a fantastic city and the people there are really mad and excited about the rally and cheer very loudly when the competitors are passing by. Everybody remembers the TV images from some years ago when they were even blocking the road. It's so unique!"

Both of the twins are looking forward to completing the event, especially as the pair continued in the rally during 2009, even with a 200 hour time penalty meaning an end to any top-tier finish: “Of course, we’ll be partying after the rally itself, where I hope that Tom and I can celebrate success from both our respective sides.”

With Maxxis being the official tyre supplier for the Dutch-based squad, Tim didn’t fall foul of any punctures during the race this year, until his retirement, which came to the attention of as certain Arabian rally star: “"Last year I didn't have a single puncture, except one when I forgot to pull off the hand brake. Even Al-Attiyah was surprised that I kept on going without flats and he came to me to inform about the Maxxis tires. For us, they are the best you can get and I am very pleased with the cooperation with Maxxis.”

With the ongoing co-operation between the two parties, Maxxis have helped to develop the tyres that are bespoke for the buggy, as the tyres that the Dutch pair will be using will be lighter and stronger in construction terms.

This will ensure lower times spent in the sand trying to change tyres if required, especially when the marathon stage takes place, which will mean that all the drivers will have to service and repair the vehicles themselves, without any assistance.

Tim, who will be competing in his 8th Dakar, explains the challenges ahead with the marathon stage now being a big part of how strategies will play out: ” I think this will be an additional challenge. It will be tense because you have to take care of your vehicle, and make sure it keeps on running. But I also have experience with the technical side of the buggy, since I was closely involved in the development and construction of the buggy. You have to control yourself, especially in the marathon stage. If you go flat out you will most probably end up with some serious problems."

With the fact that Tom will be racing and presenting will provide its own challenges, the WTCC ace felt that there was something missing, as the 42-year-old has been on the commentary team over the past couple of years. However, with the new innovative take that Tom approached both his sponsors and RTL with worked, which will make for some good viewing early next year for those following in the Netherlands.

Even with the forthcoming WTCC finale at the famed Macau street circuit being the next focus this coming November, Coronel has already been behind the wheel of the car that he will drive in the Dakar, as the efforts by all are ramping up towards the start. Tim and Tom won’t just be looking to make their rival “EAT MY DUST” in a few months’ time.