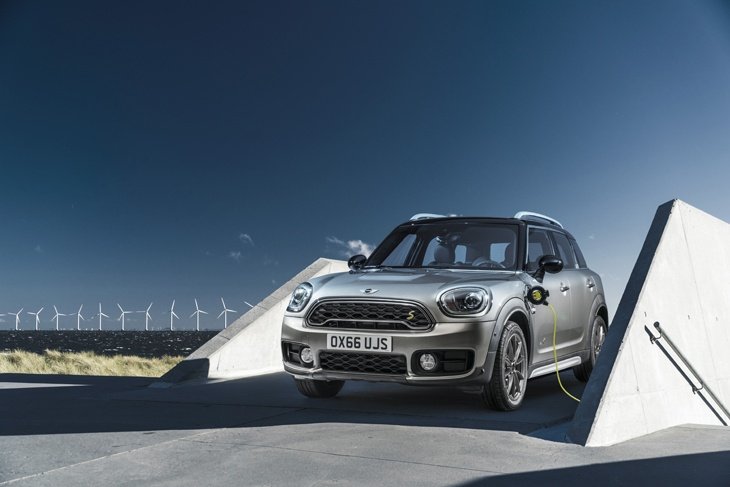 MINI's first plug-in hybrid model will hit British roads in June this year in the shape of the all new MINI Cooper Countryman ALL4, promising "sporty agility on the road" as well as the option of purely electric driving with zero tailpipe emissions.

Making good use of intelligent all-wheel drive,  the MINI Cooper S E Countryman ALL4 hybrid system is made up of a 3-cylinder petrol engine with MINI TwinPower Turbo Technology and a synchronous electric motor to output 165 kW/224 hp, enabling the car to sprint from standing to 62mph in 6.8 seconds.

A 6-speed Steptronic transmission sends power to the front wheels, while the electric motor powers the rear wheels, the interaction between the two power units creating the all-wheel drive system that provides optimal agility and stability on the road along with great traction over snow and uncertain terrain.

The MINI Cooper S E Countryman ALL4 uses intelligent drive control to ensure an intense hybrid driving experience. When setting off, only the electric motor is used, meaning that there is a virtually noiseless start; and once you reach a driving speed of 50mph, it is then that the combustion engine is gently activated - although, if required, the eDRIVE toggle switch can be used to allow the driver to continue to drive with only the electric engine beyond this point.

For city use, and shorter journeys, pure electric power is no problem, as in MAX eDRIVE mode the MINI Cooper S E Countryman ALL4 runs at up to 78mphwith an all-electric range of 25 miles.

The high-voltage lithium-ion battery is housed underneath the rear seat and flat load boot floor, minimising drawbacks to boot space and leg room. Charging the battery takes between 2:15 and 3:15 hours, and can be done by using a conventional household socket or, for increased power input and reduced waiting times, at a wallbox or public charging station.

There is plenty of space inside the new MINI Cooper S E Countryman ALL4 , with the luggage compartment volume 405 litres, which can be extended to as much as 1 275 litres with the rear backrests folded down.

And other standard features of the new car include:

To discuss your options regarding leasing a new MINI Cooper S E Countryman ALL4 from Nationwide Vehicle Contracts, contact one of our Customer Service Representatives now.