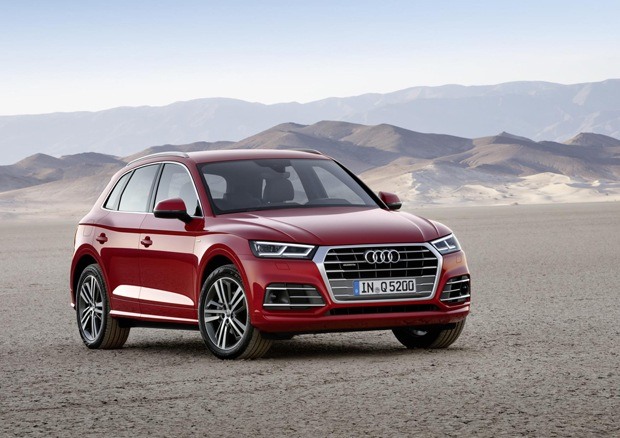 Stating the obvious, I know, but when the original Q5 is one of Audi's best-selling cars, and one of the flagbearers for 'Vorsprung durch Technik', anything replacing it has to be something good to live up to those exacting standards that Audi themselves expect and that the Q5 has set upon itself. 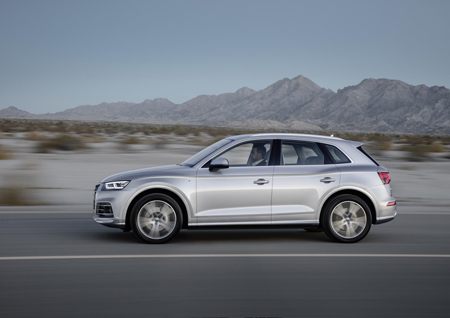 Having made its debut at The Paris Motor Show, the long-awaited successor to the Audi Q5 brought with it an intense focus on connectivity, driver assistance, aero-acoustics and driving dynamics, and showed that the bar has been raised when it comes to standards in its segment, and that the game is well and truly on with its competitors.

“The first Audi Q5 was for many years the world's best-selling SUV in its class. It was no easy task to design its successor, but that is precisely why it is so very exciting,” says Rupert Stadler, Chairman of the Board of Management at AUDI AG. “With the new Q5 we are setting the bar a notch higher. Among the great innovations are the quattro drive system with ultra technology, highly efficient engines, the air suspension with damper control and a comprehensive line-up of infotainment and assistance systems.”

The new Audi Q5 SUV is defined and structured, with a distinctively curved and strongly undercut shoulder line. The front is dominated by a sculpturally flared Singleframe grille with a solid frame and the standard Xenon headlights or the optional LED or high-resolution Matrix LED headlights with dynamic indicators. 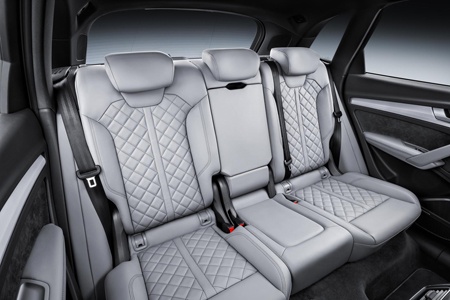 The new Audi SUV comes from the factory with 18" alloy wheels, with the S line package featuring 19" wheels with 21" wheels available as an option.

The wheel arches are strongly emphasised and are a nod to the quattro permanent all-wheel drive system, leading to the rear of the car guided by the low greenhouse tapers. And there the tail lights are available with optional dynamic indicators, the diffuser insert integrates the exhaust tailpipes, and the tailgate wraps around the C-pillars – jut as other Q models from Audi do.

Inside, workmanship quality in the new Q5 is uncompromising, with a three-spoke multifunction steering wheel as standard alongside optional ambient lighting creating an attractive atmosphere in 30 different colours during darker times.

At 4.66 metres long, 1.89 metres wide and 1.66 metres tall with a 2.82-metre wheelbase, the new Q5 has grown in nearly all directions, spreading the weight throughout and leading to a reduced unladen weight by 90kg (depending on engine), aided and abetted by an intelligent material mix in the body comprising of steels with maximum tensile strength and aluminium. 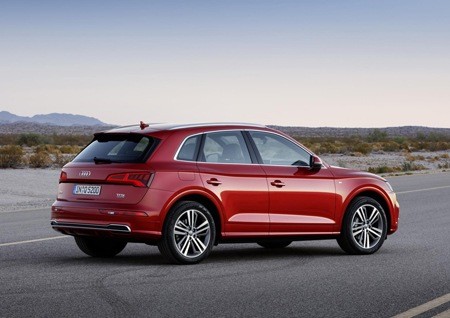 And, of course, the new Q5 now also stands at the top of its class in its aerodynamics, with low wind noises and high vibration comfort, as well as the best interior acoustics in its class.

The new Audi Q5 is launching in the UK with a powerful 2.0 TDI engine producing 190PS, with a 2.0 TSFI engine with an output of 252PS and fuel consumption of 41.5mpg to follow soon after launch.

Later on, an intensively revised 3.0 TDI, with an output of 286PS with 620Nm of torque will be gracing us with its apearance. 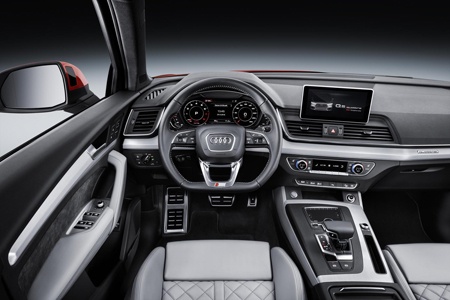 The drivetrain has been redeveloped from the ground up along with the six-speed manual transmission and seven-speed S tronic, and the automatic transmissions integrate a fuel-saving freewheel function, controllable electronically by a selection lever or by shift paddles on the steering wheel.

Changes have also been made to the chassis, the newly developed five-link suspensions, and the new electromechanical power steering system, with dynamic steering also available as an option, along with the new adaptive air suspension that can be used to vary the ride height of the car body over five stages.

Audi drive select allows access to various technical modules, enabling the driver to select one of as many as seven driving modes that now includes two new modes - lift/offroad and allroad - that help to emphasise the offroad character of the Audi Q5.

With the bigger dimensions, inside there is a lot of space for five persons, the external impressions of both width and comfort being realised, underscored by horizontally oriented lines and a three-dimensional trim strip that runs across the entire width of the instrument panel. 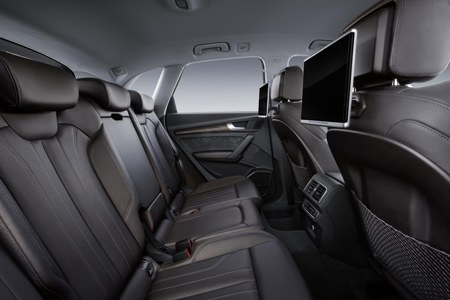 The rear seat back of the new Audi Q5 is split into three segments, with optional longitudinal and seat back angle adjustment, and depending on the rear seat position, the basic volume of the luggage compartment ranges from 550 to 610 litres, 10 litres more than in the previous model. With the rear bench folded down, this volume increases to 1,550 litres.

And to help with cargo loading there is a power-operated tailgate fitted as standard, an optional variably folding mat, optional hands-free control of the power tailgate and manual lowering of the body via the optional air suspension.

With technology high on the shopping list for new car customers, there is no surprise in stating that the new Audi Q5 is technologically gifted.

The new Audi Q5 is available to drive from Spring 2017. If you are interested in the Audi Q5 and want to discuss leasing options contact one of our Customer Service Representatives at the earliest opportunity to find out what deals we have available.