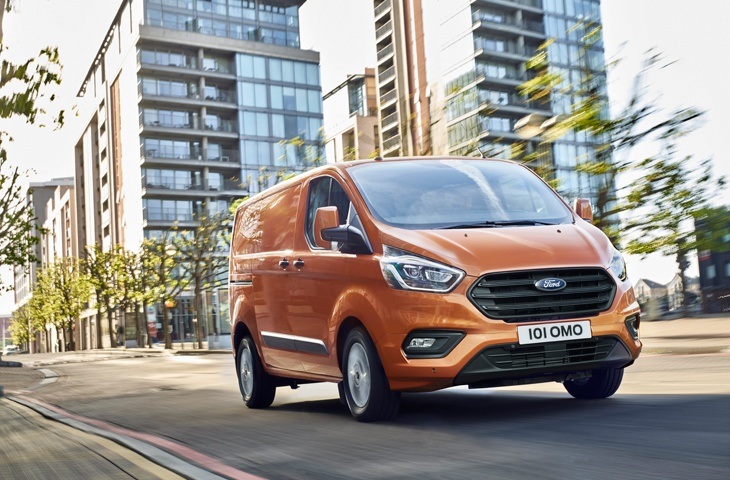 The new Transit Custom will be available to order later this year, with deliveries due in early 2018. 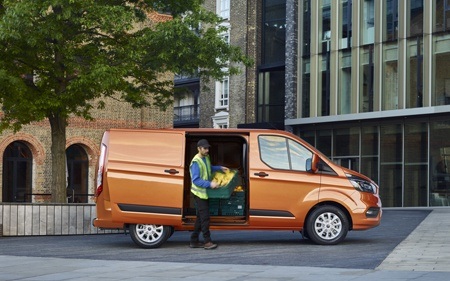 Already the UK’s best-selling commercial vehicle, the new Transit Custom is powered by the Dagenham-built Ford EcoBlue 2.0-litre diesel engine, and has not only been re-engineered to offer significant new features and capabilities, including a new ECOnetic variant, delivering improved fuel efficiency and 148 g/km CO2 emissions, but also sports a new look.

"Transit Custom has been a runaway success since it was introduced, and this new version raises the game once more," said Hans Schep, general manager, Commercial Vehicles, Ford of Europe. "We have listened carefully to our customers, and delivered a one-tonne van that is even more stylish, even more productive, and packed with smart features." 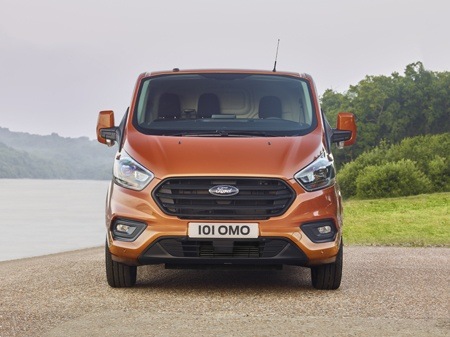 The new Transit Custom is powered by the state-of-the-art Ford EcoBlue diesel engine, introduced to the range during 2016 with a choice of 105PS, 130PS and 170PS power outputs, and a fuel-efficiency improvement of up to 13% on the previous incarnation.

And to this option, with the new Ford Transit Custom, Ford adds a new ECOnetic variant (on the 300 Series short-wheelbase van) complete with a 105PS engine with a unique calibration and Auto-Stop-Start, low rolling resistance tyres, Ford’s innovative Acceleration Control feature, and a fixed 62mph speed limiter. Fuel economy on this variant is 49.6mpg and emissions an improved 148 g/km of CO2.

The Style and Design

The whole new Transit Custom family offers commercial vehicle operators a wide choice to cover most eventualities and requirements with "a vehicle line-up that includes two roof heights, two wheelbase options, a gross vehicle mass range from 2.6 tonnes to 3.4 tonnes offering payloads up to 1,450kg, and bodystyles including van, kombi and double-cab-in-van." 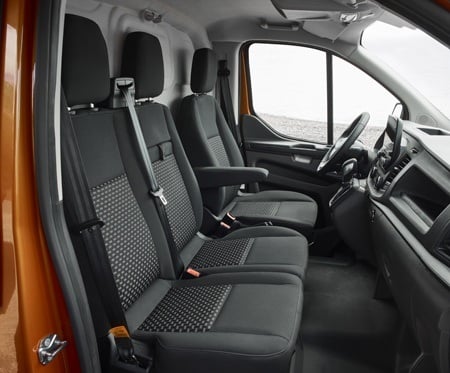 It's a Ford Transit, so class-leading load-carrying ability comes as standard, with innovative loadspace features such as the load-through hatch in the bulkhead for extra-long items, and an integrated roof rack that can be folded away when not in use.

And it looks good too, with the new Transit Custom boasting a dynamic and professional new front-end appearance with a high-mounted trapezoidal grille and dynamic, slim headlamps with the latest lighting technologies available, including distinctive new signature LED daytime running lights and powerful HID Xenon headlamps on some models. 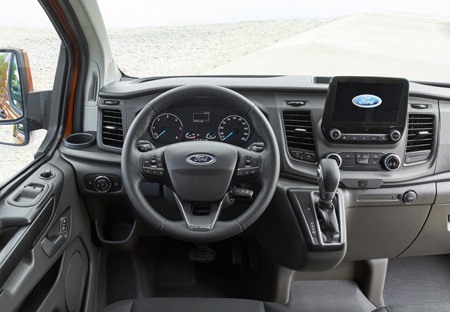 There is a new cabin interior, with an instrument panel based on Ford’s new interior design philosophy – as seen in the new Ford Fiesta, and featuring hard-wearing materials, and packed with practical touches designed for drivers who treat the cabin like a mobile office during long working hours in their vehicle.

There's plenty of interior stowage, with up to 25 litres of space offered in the instrument panel, including space for clipboards or mobile devices, and generous glove box stowage capable of storing hanging A4 files in the lower closed compartment. There is even a fold-out cup holder beneath the gear lever, cup holders and 2-litre bottle holders at each end of the instrument panel, and plenty of space within the door panels too.

For the driver, the all-new displays and control panels have been designed to make it easier for drivers to use, with high-series models featuring a floating, tablet-inspired 8"colour touchscreen with Ford’s SYNC 3 communications and entertainment system that can be operated with pinch and swipe gestures. The system is compatible with Apple CarPlay and Android Auto™.

For those vehicles not equipped with the larger displays, drivers can use the MyFord Dock in the centre of the instrument panel to mount, store and charge smartphones. MyFord also offers an MP3 player or satellite navigation system too. There are USB and 12-volt power sockets in the upper stowage bin in front of the driver, and alongside the gear lever, to make sure that devices can be charged easily.

And new seat designs, with revised foam padding and geometry for optimised support, give a comfortable trip too.

The new Transit Custom also introduces a sophisticated range of driver assistance features such as:

With the new generation Transit Custom setting the scene for Ford’s next major commercial vehicle innovation, Ford also has one eye on the future with the introduction of the zero-emission capable Plug-in Hybrid (PHEV) derivative scheduled for 2019 - certainly a giant step towards getting in line with the Government's plans for electrification of vehicles by 2040.