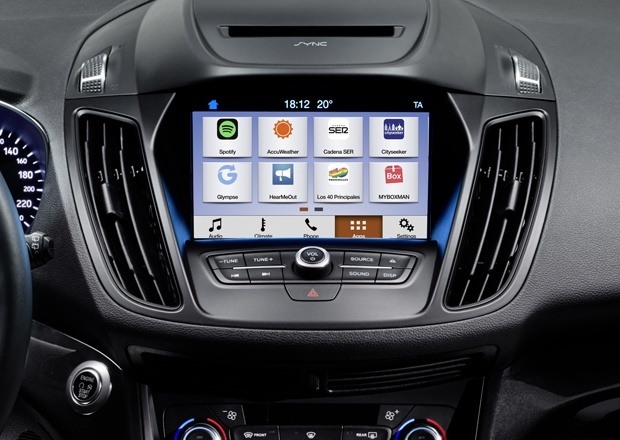 "Ask and it shall be done"

Gone are the days of relying on local knowledge and the advice of a passenger to get a coffee, petrol or parking space as Ford Motor Company launches its new SYNC 3 communications and entertainment system across Europe in the Mondeo, S-MAX, and Galaxy, following its launch at the Mobile World Congress in Barcelona on the new Kuga.

Allowing drivers to control their connected smartphones, audio, navigation, and climate functions with more conversational voice commands, the new SYNC 3 features a redesigned 8" touch screen and faster performance along with new apps for the system that can be voice-activated using SYNC AppLink.

“Whether you are craving your morning cappuccino on your daily commute or covering the cost of a journey by transporting a package, SYNC 3 brings to life innovative new ways of staying connected on the move,” said Christof Kellerwessel, chief engineer, Electronic and Electrical Systems Engineering, Ford of Europe. “Designed to complement modern smartphones, with an intuitive touch screen, SYNC 3 understands more conversational speech, is faster, and offers an easier-to-read graphical interface.”

So now, using the new SYNC 3, simply by pushing a button and saying such phrases as “I need a coffee,” “I need petrol,” or “I need to park,” drivers can find nearby cafés, petrol stations or car parks, as well as locate train stations, airports, and hotels - and be guided to them via the in-built SatNav.

Ford SYNC already exists in certain Ford models, enabling drivers across the world to voice-activate essential in car features, and the development of the new SYNC 3 - following on from more than 22,000 customer comments in feedback, and insights gleaned from research groups and surveys - will "ensure the new version is the most customer centric designed system to date." 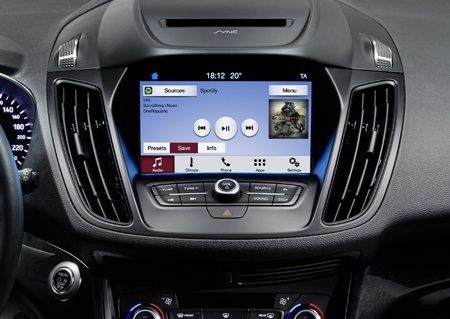 Some of the updates and changes are a little obvious to existing users of the Ford SYNC because it is all about simplifying the user experience. Using knowledge supplied to them by their customers, Ford have made sure that the most-used options – navigation, audio and phone – are the most accessible, along with a reduction in the number of steps required for a command and increased processing power (and therefore speed.)

And to increase the locality  of the system, the new SYNC 3 also has more localised versions of the subscription-free app Emergency Assistance which uses a Bluetooth paired and connected mobile phone to help the driver (or passengers) call local Emergency Services in the local language in the event of an accident where the airbag has been set off or fuel shut off has occurred. And the app even tells the Emergency Services where you are!

Taking into consideration that there are two main systems when it comes to Smartphones, Ford has made sure that SYNC 3 is compatible with both.

iPhone users can activate Apple CarPlay, the smarter, safer way to use an iPhone in the car along with Siri Eyes Free (allowing easy access to Siri with iPhones connected over Bluetooth.) All part of the safety aspect of Ford cars, Apple CarPlay lets drivers make phone calls, access music, send and receive messages, and get directions best suited to the traffic conditions, and much much more, all while staying focused on the road.

And very much in the same vein, Android™ users can activate Android Auto™ which makes all the existing and useful apps and services much more accessible and safer via use of Google Search, Google Maps and Google Play. With Android Auto™ a driver can also access over-the-air software updates automatically via Wi-Fi, once a vehicle is set up with credentials for a home Wi-Fi network accessible in a customer’s driveway or garage.

Enhancing the driver’s experience is the existing Ford Service App that provides Online Traffic Information on the navigation map, adapting to traffic conditions as they change to allow for better journey planning, as Christof Kellerwessel adds: “With pinch-to-zoom and swipe gestures, plus the familiar one-box-search we know from internet search engines, SYNC 3 provides customers with an experience on the vehicle screen very similar to smartphone screens, and is easier and more intuitive.”

And Ford SYNC 3 now adds in 5 more apps, with 2 of them brand new to in-car technology in the shape of MyBoxMan and HearMeOut.

MyBoxMan enables drivers delivering a package for others to earn around €5-8 for a typical five kilometre journey. Available initially for Android in France (in French and English), the app will be released in Germany, Spain, Italy, the Netherlands and the U.K. through 2016, and in the corresponding languages 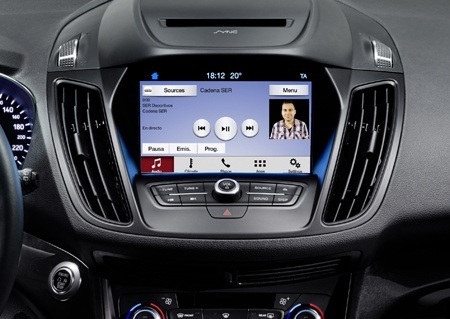 Scott Lyons, business and partner development, Connected Vehicle and Services, Ford of Europe, is very excited about these apps: “Drivers have never had access to apps like this behind the wheel. MyBoxMan and HearMeOut open up entirely new ways for drivers to stay connected and even earn money. Like a ride request service for deliveries, MyBoxMan is breaking new ground in social shipping, making intelligent and efficient use of car and van capacity on trips that are happening anyway.”

And then SYNC 3 adds in 5 more apps for use in varying situations.

AccuWeather helps drivers to plan and time their trips around weather conditions, and gives advance warning of any bad weather or weather problems with Superior Accuracy™. The patented AccuWeather MinuteCast® function uses an exact street address or GPS location to provide minute-by-minute rain forecasts, including information about what sort of rain it is, how heavy it is and how long it is likely to last.

The Cadena Ser app allows drivers in Spain to listen to the country’s most popular national radio station, providing voice control to access podcasts, shows, local stations, news and event listings on demand. Unsurprisingly, it is available in Spanish for iOS and Android

Los 40 Principales is the most popular music radio station in Spain, Chile, Colombia, Panama, Argentina, Mexico, Costa Rica, Paraguay and the Dominican Republic, and is available via the new app in Spanish for both IOS and Android. It plays top 40 contemporary hit music, including pop, rock and house, and drivers in Spain can use voice control to access podcasts and shows on demand.