Formula Masters China Series Set To Get Going in 2015 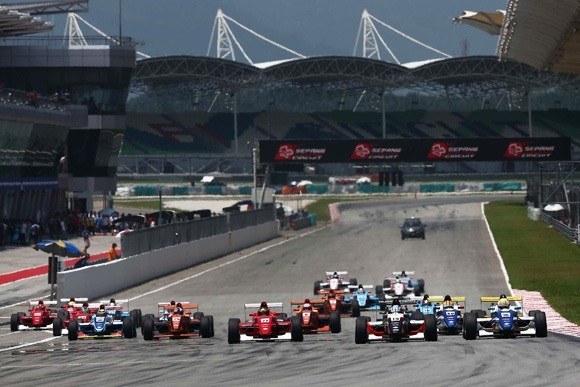 Formula Masters China Series will be expanding its reach in Asia for 2015 (Image credit: FMCS)

For the third successive year, the Formula Masters China Series is gearing up to be the home for some of the brightest young talents in Asia, as the action is set to unfold on six different race circuits in four countries.

With graduates including 2014 Champion James Munro, runner-up Matt Solomon and Dan Wells, who are now moving up the single-seater ladder for 2015, the series continues to offer a strong racing foundation for those that are aspiring to reach the very top.

Formula Masters China Series came into being to help those looking for that well-needed start by offering a lot of track time over some of Asia’s premier circuits, with regulaltions putting driver talent as the main factor to ensure success, as the series has already proved.

Some of the talent that has graced FMCS’ ranks have gone on to international series in Europe, as well as taking the leap into Volkswagen Group China’s ranks as sportscar drivers, which includes the Audi R8 LMS Cup.

The driver that topped the Best Chinese Driver category this year, Yuan Bo, ended up joining both David Cheng and Ho-Pin Tung at OAK Racing for the series finale of the Asian Le Mans Series, hitting the top step of the podium at the Sepang International Circuit.

Aiden Wright, who won the title in 2013, raced in the Audi R8 LMS Cup alongside Solomon, with Afiq Yazid (2013 series runner-up) going up the ladder via the Lamborghini Super Trofeo Asia championship. Bao Jin Long was also a driver taking on another challenge with the Porsche Carrera Cup Asia this season

The ranks could swell to beyond 20 drivers for 2015, as the teams that include Eurasia Motorsport, Zen Motorsport, Meritus GP and KCMG, will again look to battle for driver and team glory. However, Formula Masters China Series will break into new territories for the forthcoming 2015 season, as it will showcase future Asian racing talent in Indonesia and Japan for the very first time in its infancy.

The series then returns to the streets of Kuala Lumpur in Malaysia for the next set of three races, which will be a first for Formula Masters China Series, which will see the drivers have their first taste of tackling a street circuit.

The final two weekends of competition will see the series return to Zhuhai, China, as races 13 to 15 will take place during the Pan Delta Racing Festival on September 18th to 20th, which is where the title battle could really heat up. The season finale will take place at the Shanghai International Circuit from the 16th to the 18th of October, which will put all the drivers under the spot light, as the majority of series that are within the VW Group China umbrella, will be able to keep their eyes on those that are showing true promise and future potential.

Motorsport Director Dominic Lyncker stated that by bringing a diverse and exciting calendar for the forthcoming season is something of interest for not just the drivers, but also the spectators who may get their first glimpse of future racing champions out on track: “The FMCS platform is aimed at providing young drivers with a range of opportunities to develop their race craft and to gain experience on some of the region’s most prestigious circuits. We are excited to be able offer our drivers an exciting calendar that takes the series from our home base in China to Japan, Indonesia and Malaysia. We look forward to a competitive and thrilling 2015 season.”