G-Drive Lucks Out At Interlagos 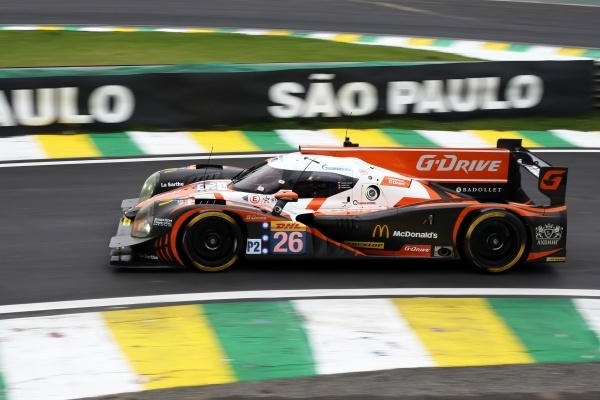 G-Drive didn't get the best of luck at Brazil (Image credit: DPPI)

With the FIA World Endurance Championship still having titles to be decided at the final round of the season at Interlagos for the 6 Hours of Sao Paolo, G-Drive were looking strong to finish the year as they had started, with a win that would help them to take the LMP2 Drivers’ and Team Trophies at the last gasp.

The team of Olivier Pla, Roman Rusinov and Julien Canal had a fight on their hands, as KCMG were no longer in contention, but SMP Racig were hot on the heels. The team were making the most of the new Onroak Autnomotive-developed Ligier JS P2 from the moment the season got underway back at Silverstone in April.

The Nissan-powered car was the dominant force in qualifying, apart from KCMG taking the top spot at Spa-Francorchamps, and had secured victories at Silverstone, Spa, Fuji and Shanghai leading up to the finale.

With a tightly-packed grid showing just how competitive the LMP2 class has been all year long, the pairing of Pla and Rusinov took pole position ahead of the KCMG pair of Richard Bradley and Alexandre Imperatori. The rest of the LMP2 competitors were split by just one second, which set up the race to be an action-packed finale.

It was the turn of Olivier Pla to get things running for the current points leaders, who were looking to at least finish the race, rather than take any unnecessary risks. This meant that the experienced Frenchman was passed early on by KCMG’s Imperatori, and even with a struggling LMP1 in his path, Pla ended up dropping down to fourth behind the pair of SMP Racing Orecas.

Setting the best lap times of the race, Pla was on the hunt to retake the lead, which happened just after the first set of pitstops, but a dramatic accident caused by a mechanical failure sent the 26 into the wall hard at turn one suddenly ended the team’s running.

Pla’s efforts to get the car back to pitlane for repairs were in vain, as the Ligier’s front suspension was significantly damaged, as the team could only sit and watch their title hopes slip away as time ticked by.

The eventual outcome was that the #27 SMP Racing Oreca team took the title by just 9 points, after the race concluded under Safety Car conditions, with KCMG just 7 points behind the eventual runners-up.

It was a bitter pill of disappointment for the team to swallow, but as Team Principal Philippe Dumas explained that “motorsport is quite an unforgiving sport,” especially with the fact that Pla was unhurt after the accident, which saw him hit the barriers close to a speed of 230km/h: “We had a lot of hope going into this race because we’ve developed an excellent car, and I was convinced that on this type of circuit, it would be invincible. The mechanics of the car decided otherwise, at the worst time and place. It’s quite an unlucky series of events for us, between here in Brazil and Le Mans, where we couldn’t bring the car back to the pits and we lost out on a lot of points. We’re going to analyse all of this back at the workshop and come back even more reliable and competitive next year.”

Pla was aware that there was a major mechanical issue with the Ligier, which just appeared at the wrong time, which couldn’t have been forecasted: “if it had happened elsewhere on the track, I would have been able to bring the car back without any problems. There, I couldn’t do anything. It was instantaneous and the wall at that spot is very close. It’s not really what we deserve, having got seven pole positions and won four races.

“We should have won others too, and especially this one, as we were above the rest of the pack once again. The car was fantastic to drive up until that moment, and I’m really disappointed for the whole team, and also my team-mates who have done exceptional work with me this year. It’s hard to accept, but unfortunately, that’s how it goes. It’s part of motorsport. You have to accept it, there’s no other option. A big thank you to the team.”

The team is now recouping their losses, after what has been a great year for the Ligier JS P2, that has made its mark both in the Tudor United Sportscar Championship as well as the WEC, with teams now snapping up cars ready for their respective forthcoming campaigns.

G-Drive will be back next year to try and capture a title that was very clearly theirs, until fate intervened at the wrong moment, but time heals all wounds, even in motorsport.