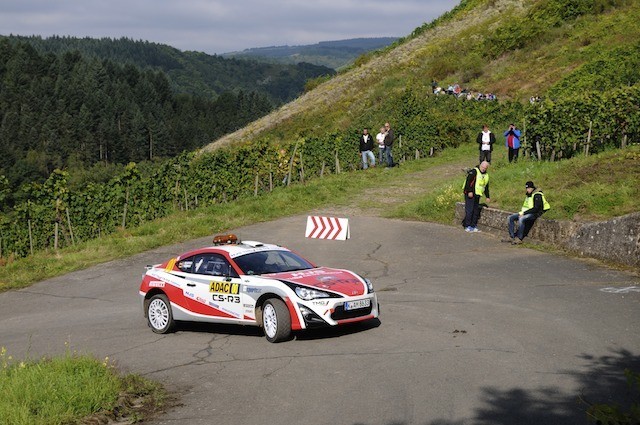 The rear wheel drive Toyota GT86 CS-R3 prototype took to the stages of the ADAC Rallye Deutschland, as the Trier region got to see first hand how the new vehicle got along, in what was a major step forward in terms of its development.

Dubbed as a “Zero” car, the Japanese manufacturer’s latest project covered 1300 kilometers of asphalt over the event’s four days, which say Hyundai’s Thierry Neuville take the win, as Volkswagen’s Sébastian Ogier and Jari-Matti Latvala crashed out in one of the fiercest tarmac rallies on the WRC calendar.

Former female world rally champion Isolde Holderied was able to push the car to its limit, as well providing essential feedback to help in maximizing the potential of what it can do.

With a tight timescale, Toyota’s Principal Engineer for the Customer Motorsport program, Nico Ehlert, said that the work carried out was very positive in many respects, even though there were potential obstacles to overcome over the four days.

“Being in an environment where time is limited and the pressure is high gave us the chance to understand not only the performance of the car but also its operational needs,” said Ehlert, who explained that there were still areas where further gains can be made. “As well as a positive weekend from a technical point of view, it was also great to see how the CS-R3 has been received. Fans were really happy to have a rear-wheel-drive car back in rally and the customer interest has been very encouraging.”

Ehlert’s comments about looking forward to seeing a great demand for the kits will help in terms of the popularity of not just the road car, but also those who want to compete on varying surfaces. As a result, the 2015 HJS TMG CS-R3 Trophy, which will run as a part of the 2015 German Rally Championship, has received great interest.

Through the work with Holderied and the team, the development work that has been invested in the project is overall rather positive, as Toyota is striving to get the kit homologated to the R3 category, as deliveries are set to take place in the first three months of next year.

The German, who retired from active competition in rallying at the end of the 2000 season, enjoyed her work behind the wheel and was happy to get the very best out of the car: “With rear-wheel drive, it is a lot of fun. It has a good balance and felt really nice to drive on all different types of stage."

She even found the memories flooding back, as Holderied has been with Toyota since the mid 1990s, and competed with them in the German Rally Championship: “There are so many people with a big interest in Toyota’s rally history and they were really happy to see TMG back at a rally again. The long Panzerplatte stage in front of a big crowd on Saturday was particularly special. I have been there many times and I like it a lot.”

The options list for the kit will soon be unveiled, so as to give all customers the choice of how they wish to specify what goes on their GT86, which will be in addition to the rollcage-fitted body shell, drivetrain and suspension systems that are already included in the price.

So negating entry fees to championships that comply with the R3 standards, as mandated by the FIA, a competitive rally car in the form of the new GT86 CS-R3 will mean that for three times the cost of the basic road car, you can buy and compete in it’s wayward brother over different surfaces.