Hell On Wheels – The School Run Is Back

Hopefully you didn’t miss Elliot’s brilliant piece published on this blog on Sunday about the School Run: but if you did, please click on the link to have a read, and then return here for more tips and ideas on how to not only keep your hair, your sanity and your temper, but also to stop your car being ‘accidentally’ vandalised by jealous and irate pedestrians and houseowners and to stop the same people threatening you verbally and with rolled up newspapers and umbrellas - as well as keeping children safe too!

While it is fully understandable that parents drop kids off on the way to work in the commuter nightmare that are traffic jams, the general conception of ‘school runners’ is that they are usually mums driving big cars before heading off to a bit of shopping at Waitrose before attending a Coffee Morning with other well-off mums. Sometimes this is true, but being a ‘runner’ myself (and male) most of us are in a bracket that contains ‘Is-that-the-timers?’, ‘Look-at-the-weathers’ and ‘Can’t-be-bothered-walking-ers.’

Some of these ideas come from the Institute of Advanced Motorists’ Peter Rodger who is asking drivers to take extra care and also from Allianz Global Assistance who are concerned that parents aren’t even ready for all this..

IAM chief examiner Peter Rodger said: “The school run brings with it a 20% growth in rush hour traffic. A little preparation can go a long way to making the school run easier, safer and less stressful, so take the extra time and plan ahead.”

Lee Taylor, Chief Sales Office for Allianz Global Assistance commented: “Taking a few simple steps could therefore ensure a smoother school run. Some may seem like common sense, but you’ll be surprised at how many drivers forget after a two month break.” 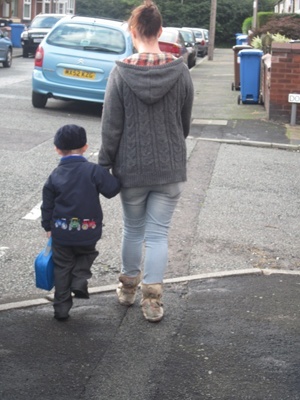 Brake’s GO 20 campaign urges drivers everywhere to commit to slowing down to 20mph around homes, schools and shops, even where the limit is 30mph, and also calls for 20mph limits to become the norm across built-up areas, for more safe pavements, paths and crossings, so children and adults can walk and cycle for their health and enjoyment, and for cheap and sustainable travel, without being or feeling endangered. It is a big decision to let children walk or cycle to school unsupervised, especially when other parents let their children do so and the peer pressure builds on your child. Faced with this and the positives in letting a child lead a more active lifestyle many adults are having to weigh up the options against the threat of their child being hurt by drivers, with recent research showing that many are put off letting their child get out and about by the inherent dangers of traffic danger.

Julie Townsend, Brake’s deputy chief executive, says: "While it's important kids and young people receive road safety education, it's crucial that drivers take on the ultimate responsibility for protecting children on foot and bike. Our research shows there's a contradiction in what some drivers say they want and the way they behave at the wheel. As well as campaigning for government and local authorities to do more to reduce speeds in communities to tackle pedestrian and cyclist casualties and create nicer places to live, we're appealing to drivers everywhere to do their bit too. By slowing down to 20mph around homes, shops and schools, you'll be helping to save lives, and enabling kids to walk and cycle more in their neighbourhoods."