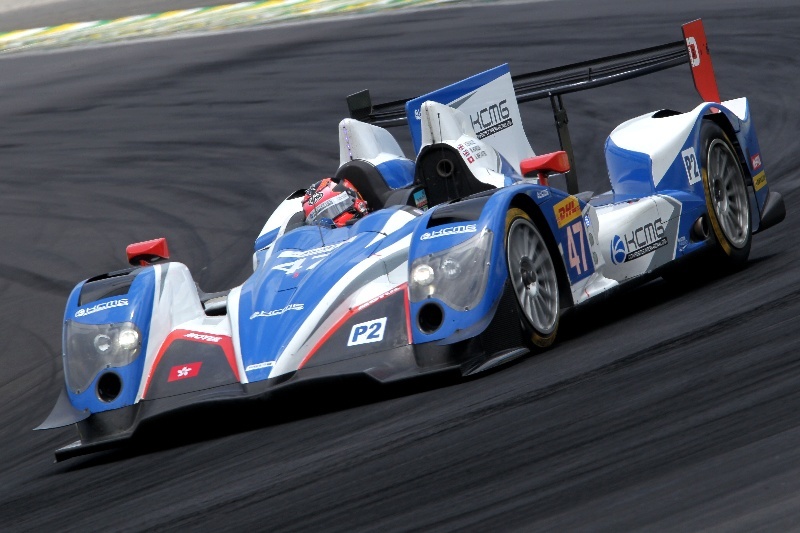 It has been a tough season for the Hong Kong-based KC Motorgroup outfit, as the LMP2 title hopefuls have had their fair share of ups and downs, in what has been an impressive first full WEC campaign.

The Autodromo Juan Carlos Pace at Interlagos set the scene for the final race of the 2014 FIA World Endurance Championship, as there was a fight to the very end for both the drivers’ and team titles in the LMP2 category.

Pride and glory were the main objectives for KCMG, whose Dunlop-shod Oreca 03R-Nissan was on the pace, despite technical problems causing a delay to end the team’s running during final practice.

However, qualifying saw no further gremlins come to the surface, as the #47 blue and white Oreca ended up on the front row behind the #26 G-Drive Ligier JSP2. Alexandre Imperatori and Richard Bradley posted a four-lap cumulative average of 1:24.843, which put them in a very good position to compete for the win from the very beginning of the race.

Imperatori started things off for KCMG, initially taking the lead from G-Drive’s Olivier Pla during what was an action-packed affair from the moment the flags changed to green.

The race continued, not depriving the onlookers of any action throughout its duration, but KCMG’s chances instantly got better from the moment that G-Drive suffered a devastating blow to its title hopes in the early goings of the second hour.

The #26 Ligier went straight on at turn one, suffering major damage due to a brake failure, with the #47 staying In the lead during the full course yellow period, which lasted for several laps.

The Swiss ace then handed over to British teammate Matt Howson, having completed 70 laps of the Brazilian track. Howson was steadily making good progress, until half way through the hour, he hit the Armco barrier with the left front of the car, having gone off twice at the same corner.

Having been forced to pit for repairs and then completing a total of 56 laps, Bradley took his place behind the wheel just after the halfway point of the race. The Brit was clearly on the charge and was hunting down the #37 SMP Racing Oreca, until it was forced to retire as a result of technical problem.

Bradley has showed great form this year, and the finale showed that in exemplary fashion as he completed a double stint before handing the car over to Imperatori for the final time of the season.

The team continued to lead the race, as Imperatori exited the pits with an unassailable lead of the #27 LMP2 entry from SMP Racing, as the action continued.

Due to the late accident that involved Mark Webber in the #20 Porsche 919 Hybrid, the last few kilometres of the racing season would end under a safety car period, giving the team their third win of the year, following on from Circuit Of The Americas and Bahrain. This was even more fulfilling for KCMG, as the team won by an astounding 18-lap lead after six hours of drama out on track.

It capped off a great year for the outfit, who also secured six podiums and one pole position this year, as Richard Bradley is looking forward to next year already: “It’s fantastic to come to Interlagos and claim victory. What makes it more special is that we’ve won tow races in a row. It’s been an excellent year, so thank you to KCMG!”

Howson echoed Bradley’s feelings, especially with the way that the team closed the season out in style: “A third win of the season was the perfect way to finish 2014. Richard, Alex and the entire team did a perfect job throughout the weekend, and our engineer Greg Wheeler gave us an amazing car. KCMG has definitely arrived in the world of motorsport!”

Imperatori thanked the team and enjoyed the atmosphere at Interlagos, where the fans came in their droves to watch the race unfold: “It’s great to finish the season with another win! I managed to take the lead and open a gap in my first stint and when our rivals hit trouble, it was all about bringing the car home.”

After last year’s efforts both in the Asian Le Mans Series and the WEC, KCMG has shown impressive form, and is stamping its own mark in sportscars. Managing director Paul Ip thanked all that have contributed towards the stalwart effort towards this season’s results: “I also would like to thank Oreca, Nissan, Dunlop, Motul and everyone who supported us throughout this amazing year! It’s been KCMG’s honour to represent and secure a number of victories for Asia in one of motorsport’s most competitive and highly lauded world championships and we look forward to reinforcing our commitment to FIA WEC through our thriving LMP2 campaign next season.”