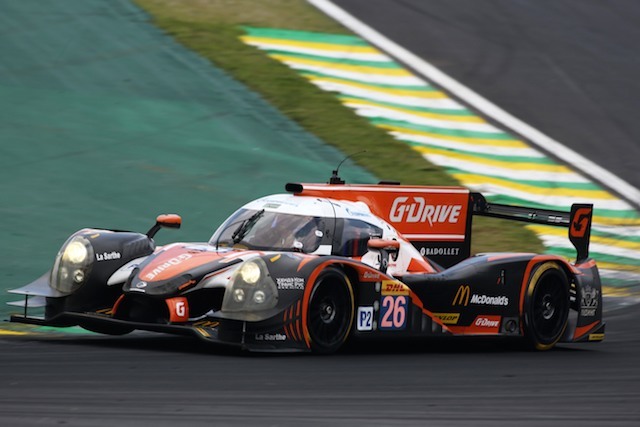 The joint venture between Onroak Automotive and the iconic Ligier brand for this year saw the advent of a new powerhouse in the LMP2 category, as the gestation of the Ligier JS P2 prototype made every one stand up and take real notice.

Onroak themselves undertook the mammoth task of designing and constructing this new generation of LMP2 coupes, with closed cockpits becoming more common place, as well as the emphasis on performance and reliability being a clear goal.

With drivers like Alex Brundle helping to develop the car, it was the beginning of a journey that would see this new challenger prove its worth across the globe in multiple series.

The first test for the JS P2 was the famed 24 Heures du Mans in June, as three different teams ran the new coupe, using two different engines and tyre providers. The car was instantly showing how competitive it would become, as the Nissan-powered #35 team of Brundle, Jann Mardenborough and Mark Shulzhitskiy would take pole position at la Sarthe.

However, after the trio was leading the LMP2 class for the majority of the race, mechanical problems saw them valiantly fight for the class honours, but they were managed to finish fifth after 24 hours of competitive racing. The top finishing Ligier was the Honda-powered #46 Thiriet de TDS Racing, who took the runner-up spot behind the Jota Sport entry driven by Harry Tincknell, Oliver Turvey and Simon Dolan.

The final entry in the blue riband event was the #33 Oak Racing Team Asia car, which placed seventh in class, putting all three cars past the finish line and into the top ten on its debut at Le Mans.

What was another impressive statistic was that Brundle himself was lapping just 2 seconds slower than the #20 Porsche LMP1 entry, which shows just how much of a talent this young Brit is.

After the lengthy break, the JS P2 ventured out to the Circuit of the Americas, as OAK Racing along with Alex Brundle and Gustavo Yacaman, put the car on pole position ahead of the Daytona Prototype class. Even with dramas once again through incidents, the pair chased the leading #01 Chip Ganassi Racing to the bitter end, taking the runner-up spot with Honda power once again.

The success continued as the car was introduced to the World Endurance Championship for the 6 Hours of COTA, where the car took pole position, placing fourth in class.

The G-Drive team of Olivier Pla, Julien Canal and Ruman Rusinov would go on to take two victories and four pole positions for the rest of their WEC campaign, which came to an abrupt halt at the season finale in Brazil, but showed the car was a challenger the minute it hit the track running.

US-based teams Michael Shank Racing and Krohn Racing, along with France’s Graff Racing, are among those that have purchased the Ligier JS P2 for their respective 2015 campaigns, which has shown the impact that the new car has made.

The car has a multitude of characteristics that have attracted teams far and wide, which includes comfort, visibility and aerodynamics, along with the fact that the car itself has already been homolgated to use the current Honda, Nissan and Judd power plants that are in circulation.

Further developments will see this car as the proverbial benchmark for teams and manufacturers to beat on race tracks across the globe, as the experience and data already gathered through the exploits of the Ligier JS P2 will see it try to fend off a variety of new challengers next year.