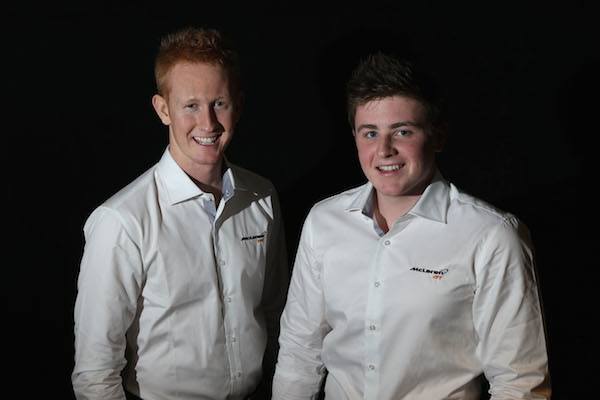 Wylie and Watson are looking forward to their new journey with Woking (Image credit:

The newly-established McLaren GT Young Driver Programme, which was unveiled at the recent Autosport International Show, has been introduced to help young drivers to further apply their learning skills and better their knowledge in the world of GT racing.

GT Racing has become more and more competitive as the amount of manufacturers involved has increased accordingly, as the Woking manufacturer now brings its new 650S GT3 out on track. Customer teams will be seen in this new track-focused machine this year, which had a successful debut in the Gulf 12 Hours that brought McLaren’s GT program in 2014 to a competitive close.

The two young hotshots that now become the first to join of the ranks of this new initiative, are Scotland’s Ross Wylie and Northern Ireland’s Andrew Watson, who will work with the Woking-based outfit, along with McLaren’s existing factory drivers, Rob Bell, Kevin Estre and Alvaro Parente.

McLaren GT Managing Director, Andrew Kirkaldy is the man that has been leading the way to search for prospective young talent from our shores that can be given the chance to further their careers.

Kirkaldy, who was also a former racer, has also won the McLaren Autosport BRDC Award, is looking forward to helping future superstars in their careers: "The GTracing scene is as exciting now as I can ever remember, and there is a huge amount of talent on every grid week-in week-out, so it can be difficult for young drivers to get on the first rung of the ladder to show their true potential.

“This programme is designed to offer young drivers we feel have something special a chance to show what they can do behind the wheel of a GT car, and also work closely with our drivers, engineers and technical teams, giving them access to many years of race- and championship-winning experience at the highest levels.”

Both Wylie and Watson will take part in the extensive development of the testing schedule of the new 650S Sprint and GT3 throughout this season, as well as helping with driver tuition for the Pure McLaren track driving experiences. They will also be able to have access to the different aspects of the business, which ranges in many different facets, that includes media training and simulator testing and much more.

Wylie, who hails from Dumfries, won the British GT4 Championship last year, is one of the latest crop of talent that hails from the same area as sportscar legend Allan McNish. The 23-year-old, who made his way through racing in the VW Racing Cup and the VW Scirocco R-Cup, is looking forward to working with Watson during the season.

“I am extremely grateful for the opportunity to become involved with McLaren, which is such a famous name in motorsport, and to have access to the people, technology and levels of support, both on and off the track, is a dream come true,” said the Scottish driver. “I look forward to working with my new teammate and the whole McLaren GT team this year.’

Watson, who has made his progress through the Ginetta programs, which includes the Junior and GT4 SuperCup championships, as the 19-year-old was leading the 2014 series and eventually placed in the top five overall at the finale at brands Hatch last year.

“I am thrilled to have been given such an opportunity with McLaren GT. I have been working hard to improve and progress my career over the past few seasons, so to have this recognised by McLaren is a real honour,” said the Belfast-born driver, who hopes to help the team progress with the new 650S GT3. “This is while I also gain valuable knowledge and experience from one of the most famous names on the grid to take my career to the next level. I look forward to working with Ross and the rest of the team in 2015.’

Over the coming weeks, further information will be provided about what the McLaren GT Young Driver Programme is, as well as the plans that they have with regards to where both Wylie and Watson will race this year. The best of British Motorsport is definitely doing its part to give something back to future generations of potential world champions.