The Time is Nigh

The new MINI Cooper is on its way, with a release date of March 2014; and MINI are promising that it will be the most revolutionary yet. And if you think that a new design, a radical range of three and four-cylinder engines and more hi-tech kit than ever before is revolutionary, then that will be proved to be right.

With Cooper D, Cooper and Cooper S models going on sale first, the new model has improved safety features too and, for the first time ever in the UK, UKL1 – BMW’s new front-wheel-drive platform architecture that will be evident on 10 MINI and BMW models. 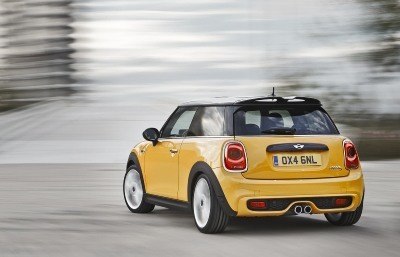 There are trademark MINI features like the rounded headlights, tiny overhangs and compact proportions, but there the old MINI stops and the new MINI starts; raising the question of “When is a MINI not a MINI?

First evidence of the new styling comes with a semi-circle of LED daytime running lights in the headlamps, and then there’s the larger  tail-lights; which get you wondering what else has changed, and you start to notice that it is the biggest MINI to date.

Which, all-in-all, means a more spacious ride, a more comfortable ride and therefore a better ride.

One of the more traditional elements of the dashboard has been ditched in this new MINI Cooper (which may lead to letters of complaint from Outraged of Tunbridge Wells) with the large centrally mounted speedometer now no longer, the outer speedo ring now replaced by LEDs which work in partnership with technology such as the parking sensors, glowing green, yellow or red depending on how much space there is around the car to park.

And the LEDs also glow (this time in blue, orange or red) depending on which of the three MINI Driving Modes - MID, SPORT or GREEN - that the driver is using and flash when hooked up to the optional sat-nav system when approaching a turning that is advised. 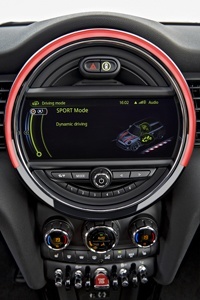 Also included in the technology sector of the MINI Cooper is a collision and pedestrian warning system with an automatic braking function at lower speeds, the aforementioned reversing camera and parking assist, and headlights that use the front-mounted camera to see oncoming traffic and automatically dip from the main beams.

Taking the dial from the centre means that it is now positioned in the driver’s eyeline indicating speed, revs and remaining fuel, and that centre space is now taken up with a large circular centre console with a four-line TFT display as a basic option that can be specced up to an 8.8” colour screen measuring in at up to 8.8 inches for use with infotainment and the like.

Also in the centre console of the MINI Cooper is the start-stop button in the shape of a red switch that pulses as you enter the car.

Driving a MINI Cooper has always been an experience - bad or good – and now MINI’s engineers have worked hard to improve the MINI’s ride and handling and testing it on the toughest of roads; in the UK. So this particular MINI offers “improved acoustic refinement in the cabin” and “eliminated vibrations from the road surface”. 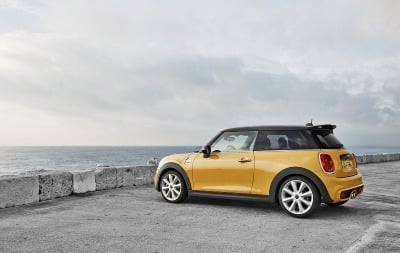 Many of the different models, so MINI say, will each have a different BMW engine.

The flagship MINI Cooper S has replaced its 1.6-litre turbo engine by a 2.0-litre turbo cut from the same cloth (so to speak) which means that power is up to 189bhp, 0-62mph down to 6.8 seconds, and fuel economy improved to 49.6mpg.

There will be a choice of three six-speed gearboxes: the expected manual and auto, and then a sports auto which is a dual-clutch gearbox that, when used with the MINI Cooper S it cuts the 0-62mph time and boosts the fuel economy in comparison to the standard six-speed manual.

The New MINI Cooper in March makes waiting for Santa a breeze!