Mini Heads Back To The Dakar 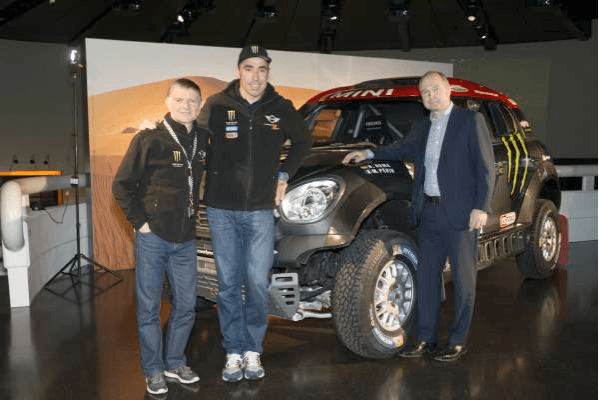 9,000 kilometres of the toughest terrain will be waiting for cars, bikes and quads to hit the sands of the South American desert just after the New Year, as the Dakar Rally will test the drivers, co-drivers, mechanics, support trucks and teams to the absolute limit, both mentally and physically.

MINI ALL4 Racing will now return to the event that it has won for the last three years, starting off in 2012, with the John Cooper Works Countryman-based challenger. This iconic British brand entered new territory in 2011, partnering up with X-raid the year previously, having already secured glory back in the 1960s with the likes of Paddy Hopkirk during a golden age of rallying.

The team will be led by Joan “Nani” Roma and Michel Périn, who will start things running in the #300 Monster Energy Rally Raid Team car, who will be looking to extend their winning run. A further nine MINIs will be racing, two with the Monster Energy team and the others with X-Raid, which will be comprised of international crews.

Roma himself, who has competed in the Dakar Rally 18 times, feels that the event runs “through his blood.” The Spaniard has also made the transition from two to four wheels rather successfully, as he won the 2004 Dakar on a motorbike.

“Winning the 2014 Dakar Rally in the MINI ALL4 Racing was very special for me, because it came exactly ten years after my first Dakar victory,” Roma explained, as MINI have officially announced that they will be competing in the Dakar until and including 2017.

“The MINI ALL4 Racing has been strong from start to finish. It is the way we know the MINI to be: powerful, reliable and fast. It has been a key factor in making my most recent Dakar victory possible,” said the three-time winner of the event, which migrated to South America for the 2009 event.

MINI’s Senior Vice President, Jochen Goller, explained at the recent media event that MINI’s participation in the Dakar Rally itself was a “unique opportunity to connect with its fans worldwide, with Dakar enthusiasts and people who look beyond statistics and results to enjoy sports in such fascinating, exotic places.”

Goller further explained that the brand is looking to continue its success on the event, as the might of the MINIs racing in the Dakar have made their own historic mark in the event’s history: “For the past three editions, the MINI ALL4 Racing with its core qualities of performance, reliability and agility has proved that it is the car to beat. Our goal for 2015 is to achieve a great team result, just like we did in 2014.”

It was a choice that needed to made, even though with success, teams in motorsport are never satisfied with just a handful of wins, but with the opportunity to move further ahead of the competiton was something too good to miss for MINI, as Goller stated: “These strategic reasons and our constant desire to improve were behind the key decision to extend our engagement far beyond the 2015 Dakar Rally into 2016 and 2017, together with our strategic partner in motorsport, X-raid.”

The event will get underway on January 4th, as teams from across the globe will again be battling their way through gravel, sands and the Andes along the way.

It is one of the most demanding test for any of the competitors, as drivers lose on average 65 litres of sweat and over 60,000 calories, which requires stamina and experience on the event itself to be a key factor in success.

It is also a race that includes orienteering through Roadbooks, which are the competitors’ gospel when it comes to finding their way through the stages, which also sees the return of the two-day marathon stage this year.

The Dakar has a finish rate of less than half the field when 9 days of competition are over, but with names such as Carlos Sainz, Luc Alphand and Stephane Peterhansel having secured glory in years past, the future of the event is still bright with brands like MINI keeping everyone honest.