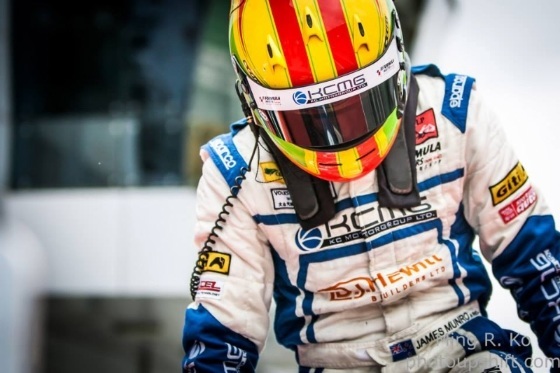 Munro reaps the rewards of success, gaining a scholarship from KCMG for 2015

New Zealand’s James Munro showed that he was a race driver that was in a class of his own this year in the Formula Masters China Series, but came under stern opposition from Eurasia’s Matt Solomon on the closing stages.

The 17-year-old, who took the drivers’ title with the Cebu Pacific Air by KCMG team on the penultimate race of the season at the Shanghai finale, will receive financial aid towards his 2015 racing campaign.

The scholarship through KCMG was to help successful drivers within their ranks to move up after winning a championship as Munro did this year. He now has an option to represent the Hong Kong-based outfit in next year’s All-Japan Formula 3 Championship, which will also have a €100,000 subsidy in terms of financial assistance.

But if he decides to venture into another series when he announces his 2015 plans in December, Munro will be provided with a €50,000 prize for his efforts. By being awarded the scholarship, the New Zealander will be given the chance to test KCMG’s Dallara-Toyota F308 before the end of the season.

KCMG, who have committed to support talented youngsters in their career development, have done so since they started racing back in 2007, with Munro being the first champion produced from their stable.

They have been a part of the Formula Masters China Series, formerly known as Formula Pilota China since it started back at the beginning of the 2012 season. The series, which is now supported by Volkswagen China, has been helping to provide development and the progression of young new talents within Asia ever since, and has proved its success.

KCMG has progressed to the top of the ladder in the series, especially with Akash Nandy and Dan Wells dominating the Formula Masters Macau Grand Prix Challenge at the tail end of last year. This was before the outfit took the team and driver championships, with Munro dominating the early part of the year.

“I'm very grateful for this scholarship from KCMG which will help me make the next step towards becoming a professional,” explained Munro, who said he enjoyed this season with the team. “We had a lot of successes together and to be rewarded with this at the end of the season makes it that much better.”

Paul Ip, KCMG's Managing Director, was delighted to present the award to the flying Kiwi, whose results have been exemplary over the course of a challenging year in an increasingly competitive championship: “We are very proud of what he has achieved for himself and for the team. To guide and support young talented drivers aiming to reach their full potential in the sport has been one of KCMG’s philosophies and we are keen to maintain this. Thus, the KCMG Motorsport Scholarship will continue to be available for 2015.”

The future looks bright for Munro, who is looking forward to the next challenge in 2015, as he aims to get to the very top. But now we wait until he decides where the next step will be.