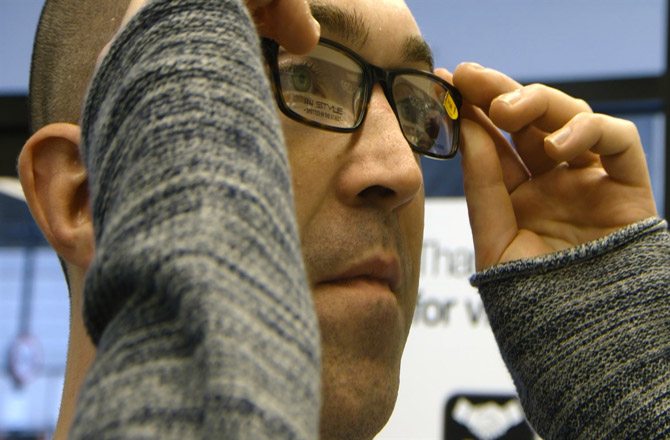 Reading a number plate from 20 metres away has been a part of the driving test since 1937 but Vision Express believe it’s time to scrap the current vision test in replacement for more "worthwhile indicator of roadworthy sight".

Findings from comprehensive eye tests conducted by the leading optician on over 1,000 UK residents have some startling news when it comes to the eyesight of drivers here in the UK.

One in five – around 7.6 million UK licence-holders - haven’t had any vision check since reading a number plate at 20m when passing their driving test.

What’s more, more than half of drivers surveyed (52%) confess to not always wearing their glasses/lenses and 81% of UK drivers flout voluntary sight requirements, failing to have an eye test every two years.

Vision Express used their high tech, mobile ‘Vision Van’ to test drivers and then give those drivers comprehensive eye tests after it.

Thankfully, only 1% of the public tested failed to read a vehicle registration plate from 20m. However, 2 in 3 (65%) were found by the 'Vision Van' optometrists to be wearing an incorrect prescription.

As bad as this sounds, it gets worse with optometrist analysis showing that an estimated 7% of licence holders (that's a whopping 2.8 million drivers) are putting not only their lives but the lives of others at risk by getting behind the wheel because their vision unaided was either below the legal standard to drive, or borderline.

With these findings in their hands, Vision Express - in collaboration with the Police, industry bodies and road safety charities - is publicising and supporting the ‘Eye Tests Save Lives’ initiative which encourages a plan to introduce mandatory vision checks every 10 years for UK motorists.

It's not a new thing. Vision Express has been campaigning for changes to sight standards for drivers since 2015 under the banner ‘Eye Tests Save Lives’, following Government statistics revealing that around 3,000 road casualties each year are down to poor driver vision.

Vision Express director of professional services, Jay Ghadiali, said: "There is no question that road casualty figures with vision identified as a causal factor are hugely underreported.  We believe the annual 3,000 figure is the tip of the iceberg, and sadly the issue of sight is only raised when there is yet another fatality, like in the case of Cassie McCord or Poppy-Arabella Clark."

Jay added: "We cannot sit on our hands and allow drivers to continue to flout their legal responsibility to ensure their sight is adequate to drive. We already have robust research to show the scale of the problem of poor driver sight ... and we now have sophisticated ways of testing vision that makes the number plate check obsolete. We’re calling for it to be stopped and replaced with mandatory eye tests every 10 years to coincide with licence renewals, and we’ll continue to gather the data to convince the Department for Transport and policy-makers that this is vital."

The Vision Express ‘Eye Tests Save Lives’ campaign has already won multiple awards for its efforts in raising awareness of the dangers posed by motorists with poor vision, and has already changed opinions with the DVLA recently introducing an eye test reminder to driving licence renewal notices.

It is also backed up with the 'Don’t swerve a sight test' campaign backed by The Association of Optometrists’ (AOP) which is also calling for a change in law that would require drivers to have  a comprehensive vision check to prove their vision meets the legal standard not only when they first apply for the licence, but every 10 years thereafter, and more frequently after the age of 70. At the moment, drivers over the age of 70 must actively make a declaration every three years that they are fit to drive - but do not actually have to pass a test.

If you have not had an eye test in the past two years, maybe it is time to do so?