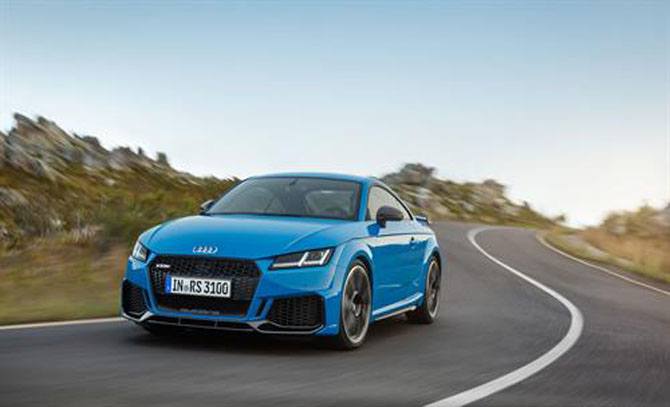 From its refreshed style to impressive power range, here's everything you need to know about the new Audi TT RS

The Audi TT range finds itself joined by an old favourite in April - a new Audi TT RS Coupé and Roadster - boasting some subtle yet effective styling tweaks and a top speed of up to 174mph.

A redrawn front end and the striking rear give it a dynamic appearance, topped off with a new-look quattro logo on the gloss matt grille. Enlarged lateral air inlets add to the impression of width and a continuous front spoiler gives the car its distinctive, motorsport-inspired look.

At the rear, a newly designed fixed rear wing with side winglets catches the eye but not only looks good but, as part of the aerodynamics concept, supports RS-typical performance and efficiency. To top the look off at the ear, two large oval exhaust tailpipes create the signature RS finish.

The new TT RS is available in eight different colours, including the new RS-specific colour Kyalami green and the new colours Pulse orange and Turbo blue, and the fabric top of the TT RS Roadster is black. Privacy glass is fitted to the Coupé as standard

With some particularly impressive statistics when it comes to power (five-cylinder, 400PS output, 480 Nm (354.0 lb-ft) of torque, quattro all-wheel drive) the Audi TT RS impresses when it comes to its outstanding driving performance too. The Coupé sprints from 0 - 62mph in only 3.7 seconds, accompanied by the orchestral five-cylinder sound that you would expect. Yet this does not compromise the fuel efficiency of between 34.9 and 35.8mpg with combined CO2 emissions coming in at between 183 and 181g/km.

With the 2.5 TFSI engine in the new Audi TT RS, Audi Sport will be looking to maintain its unbelievable record when it comes to the prestigious "International Engine of the Year Award" which it won for the ninth consecutive time in 2018. The turbo engine draws its power from an engine displacement of 2,480 cm3, has a maximum torque of 480 Nm (354.0 lb-ft) between 1,950 and 5,850 rpm, and a regulated top speed of 155mph that can be increased as an optional extra to 174mph if required.

The overall low weight and firm suspension of the TT RS mean that when it comes to handling on the road, its' performance is exemplary, the specifically adapted and progressive steering making sure that road contact is maintained.

RS sport suspension plus is also available as an option with adaptive dampers in Audi magnetic ride technology. 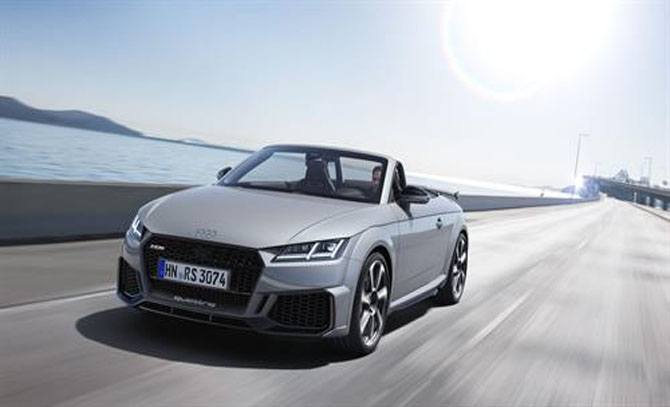 As the driver of such a car as the Audi TT RS, you would expect everything inside the car, from Controls and Display to Comfort, to be focused on you - and you won't be disappointed.

Don't expect the Audi TT RS to be suitable for a family day out. While there are rear seats, you will need small people to fit in them - yet there is plenty of room for shopping bags, sports bags and holdalls instead.

Audi also offers a great deal of infotainment features, as up-to-date as you would like and as you would expect. Options include MMI navigation plus with MMI touch including free text search and natural language voice control, as well as the Wi-Fi hotspot and the Audi connect online module. The Audi smartphone interface connects smartphones with the TT RS and can stream content seamlessly to the Audi virtual cockpit via USB.

There is also a Bang & Olufsen sound system that provides an excellent sound experience on board with an output of 680 watts.

Going up against the Nissan GT-R and the Porsche Cayman S is a tough fight, but the Audi TT RS gives it a good go.

To find out more about leasing the new Audi TT RS, call Nationwide Vehicle Contracts on 0345 811 9595 to discuss your options.