2014 saw the first phase of Project Brabham’s new platform evolve, with the first funding target of £250,000 being surpassed, with 2911 funders from 64 countries helping to get this unique and highly-interactive project up and running.

Brabham Racing’s Team Principal David Brabham has been hard at work over the past few years to regain the family’s racing name, as well as set future plans into effect for a return to the world of racing. These plans also include the possibility of returning into Formula One in the future.

The forthcoming Autosport International Show at the NEC in Brimingham, will see Brabham Racing’s first official public outing of the 2015 season, which will also see Brabham himself be in attendance for the entire event.

At the event itself, visitors will be able to visit stand 7210 in Hall 7, as the new Project Brabham T-Shirt will be available to purchase. This latest addition to the Brabham collection, which also includes official Brabham Retro merchandise, came about through those that are a part of the Brabham community members, as the feedback regarding an official t-shirt led to the decision to release it.

“Autosport International is the perfect place to launch the ‘Inspiring wins through pioneering thinking’ Tee,” explained the veteran driver, who will also sign those T-shirts that are bought at the Show itself. “By doing this, we are allowing our supporters and wider show fans to snap one up early. We are really looking forward to meeting our Brabham community and introducing new members at Europe's biggest motorsport show.

David, son of the late Sir Jack, a true motorsport pioneer himself, will be talking on the Autosport Central Stage and the F1 Racing grid during the two public days. He will candidly talk about the visions that he has for Brabham Racing’s return to racing, as well as achieving sustainability within motorsport, which is more crucial towards the health of many racing series around the globe.

The new T-Shirt will also sport the moniker “Inspiring wins through pioneering thinking,” which is highly relevant to the digital platforms that are now on-line via Brabham Digital: Brabham-Fan, Brabham-Driver and Brabham-Engineer. They will be available and cost just £20, in a variety of sizes, as well as all visitors able to take advantage of a £5 show discount on the Brabham Retro collection.

David will be available for a signing session at the Brabham Racing stand each day at 11am, as will his son Sam, who is the first Brabham to have won in Formula Ford, at 3pm.

The platforms also help to reveal the inner workings of how a top-tier team works, as well as learn from some of the best individuals in their respective fields, which includes David himself.

Visitors to the stand will also be able to find out more about this successful and pioneering scheme, with members of the core Brabham Racing team on hand to talk.

Those visitors will also be able to sign up to the community at the show itself, deciding what type of interaction they are looking for, as well as being given a direct opportunity to be a part of a bright future into racing with Brabham Racing itself.

The Autosport Show is just a part of the journey that Brabham Racing is set on, as the return to racing is not that far away from being a reality. To become a part of this groundbreaking project, visit www.brabham.co.uk and click on the Indiegogo page, which remains open under the “Forever Funding” pilot scheme. 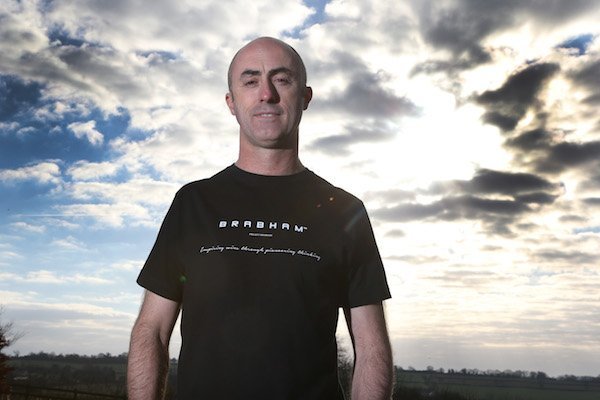 David wearing the new T-shirt that will be launched in Birmingham (Image credit: Brabham Official)