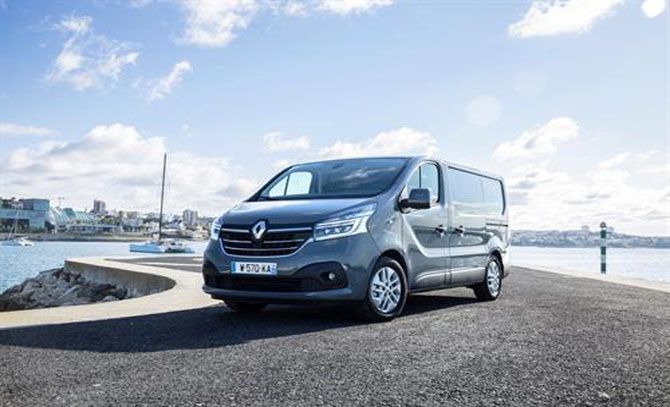 Renault vans have always had a great reputation amongst UK tradesmen and women, and now the French van manufacturer has announced updates to both the Renault Master and the Renault Trafic. Plus, rumour has it that even more of these workhorses will start appearing on UK roads.

The first batch of deliveries are scheduled for September, so there’s never been a better time to lease the new Renault Trafic from Nationwide Vehicle Contracts – complete with even greater efficiency, convenience and comfort. Not to mention a revised style, new interior and enhanced engine.

Despite the new expressive front-end design, you can tell straight away that you’re looking at a Trafic. It features full-LED headlamps, that’re incorporated into the C-shaped lighting signature that’s synonymous with the Renault character. There’s also a bolder grille – with space for the Renault logo – and a chrome finishing strip, as well as a new ‘Urban grey’ colour that completes the revised style, along with a passenger side door fitted as standard.

Inside the cabin, you’ll find an updated dashboard with satin chrome buttons in a new dark carbon colour scheme. The upholstery has been improved and is now more comfortable and durable, and the new on-board multimedia solutions – the R-LINK Evolution that’s compatible with Android Auto and the MediaNav Evolution with multitouch screen that’s compatible with the Android Auto and Apple CarPlay – are now in place on some trims.

As Renault look to focus on driver safety and comfort, the new options include a Renault three-button key with single door opening (SDO) for improved vehicle security, driver safety and convenience. The new Trafic also offers an impressive 90-litre storage capacity – one of the best on the market – including 54-litres of under passenger seat storage. Although What Car? suggest that “with just one large central dash area suitable for folders or papers, and an average-sized glovebox,” so more space could be beneficial.

The load area has a capacity range of 3.2 to 8.6-m3 and now benefits from rear doors that open 180-degrees. The LED lighting has also been improved to ensure better working conditions, and there’s a “load-through bulkhead that extends maximum carrying length in short-wheelbase models from 2,537-mm to 3,750-mm and in long-wheelbase variants from 2,937-mm to 4,150-mm” for longer loads.

At 8.6-m3 the load volume of the Renault Trafic is slightly more than the Ford Transit Custom. The Renault Trafic has a maximum payload of 1075-kg for 2.8-tonne, short-wheelbase models and 1280-kg in 3.0-tonne, gross vehicle weight vans.

In an effort to appeal to more and more business customers, Renault has introduced new 2.0-litre, turbocharged dCi engines. They feature alongside the existing 1.6-litre diesel engines as well as a six-speed EDC (Efficient Dual Clutch) automatic transmission. Of course, all the engines comply with Euro 6d-TEMP standards and they’re also capable of great power outputs – spanning 120 to 170-hp – and increased torque of up to 380-Nm. As well as being matched to a six-speed manual gearbox as standard with the 145 and 170-hp versions having the new six-speed EDC automatic available for faster gear shifting. Plus, the fuel consumption is in the mid-40s MPG.

The 1.6-litre diesel engine Trafic is available in a choice of four outputs – 94-bhp, 119-bhp, 123-bhp and 143-bhp. They all have a six-speed manual gearbox, but there’s no automatic gearbox option unlike the Trafic’s main rivals the Ford Transit Custom and Mercedes-Benz Vito. However, according to What Car? “there’s a noticeable difference between the single and twin-turbocharged engines.” They suggest the 123-bhp version is the best option, as it’s “capable of combining refinement and fuel economy.” Furthermore, it’s a quiet van to drive, steering can be a little forced and visibility is great.

The new Renault Trafic is available in Passenger and SpaceClass body styles, both feature style improvements and drivetrain upgrades. The family-focused Passenger has also received new upholstery, a rear air conditioning boost and sliding windows. Overall, there are 53 versions of the new Trafic over a choice of three trim levels – Business, Business+ and Sport. In addition to the standard/high-roof and short/long-wheelbase panel vans, there’s also a range of body types – including double-cab crew vans and passenger minibus variants that can seat up to nine people.

As the basic trim, the business models feature everything from – electric windows, electric heated door mirrors and alarms to immobilisers, adjustable steering wheel and a DAB radio with Bluetooth as well as a multifunction trip computer. Whereas the upgraded Business+ model includes everything from – body-coloured bumpers, manual air conditioning and a wide-angle passenger mirror to rear parking sensors, a mobile office package that includes a smartphone cradle and a fold-down centre seatback with detachable clipboard.

On the other hand, the top-of-the-range Sport models have been designed with an upgraded dashboard, an upper storage compartment and leather-covered steering wheel. Plus, everything from – cruise control with speed limiter, 17” alloy wheels and front fog lights to body-coloured mirrors, metallic paint and automatic headlights and wipers. As well as an upgraded DAB radio with aux input and USB sockets, and a MediaNav 7” touchscreen navigation system.

To find out more about the new Renault Trafic, contact one of our Customer Service Representatives so they can help you get the very best deal.