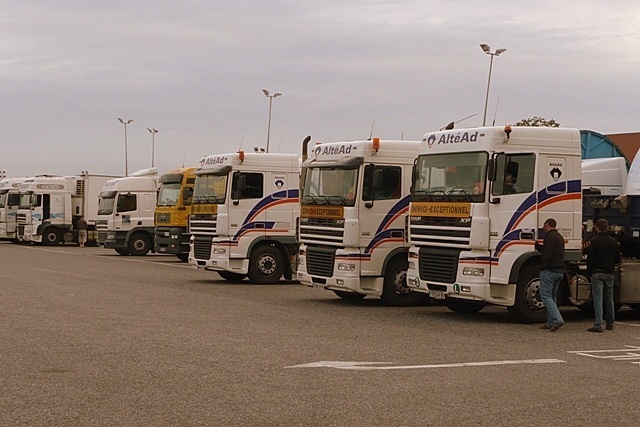 In what may have seemed to be an April Fools joke, Transport Secretary Patrick McLaughlin announced that from April 1st, foreign hauliers were being charged to use UK roads; just as UK truck drivers working in Europe have to pay tolls and levies when delivering goods abroad.

Previously in the UK, foreign trucks operating here weren’t required to make a similar payment, but the HGV road user levy has been brought in a year earlier than planned to ensure a more combative British haulage market.

It is a levy that has been called for by the UK haulage industry and it now enables British hauliers to compete at least on a level footing with their foreign counterparts by removing some of the inequality UK hauliers feel when paying to use many roads abroad.

Patrick McLoughlin said: “The HGV road user levy will provide a massive boost for the UK haulage industry. It will create a level playing field across Europe, giving UK firms a much better opportunity to win business. This is yet another example of how we are taking positive action to back British business and build a stronger, more competitive economy.”

Obviously, the road user levy – which is applicable to all HGVs of 12 tonnes or more that drive on UK roads, irrespective of country of registration – was welcomed by freight industry associations.

BVRLA Legal and Policy Director, Jay Parmar, said: “This road user levy will help redress the unfair competition that UK hauliers have faced from their European counterparts, but it is vital that the new regime is robustly enforced across the UK. We would also like to see the Driver & Vehicle Services Agency (DVSA), Driver & Vehicle Agency (DVA) and police being given more resources to enforce the new levy. As well as enforcement cameras, we need extra officers on the roadside to collect penalties from foreign hauliers.”

And Karen Dee, FTA Director of Policy at the FTA said: “FTA has consistently supported the introduction of the HGV Road User Levy.  Until now operators of foreign HGVs have paid nothing in UK taxes.  They pay vehicle tax in their own country, and buy low-taxed diesel before entering the UK, and in so doing save up to £200 on a full tank of fuel.  The levy won’t fully redress this imbalance in costs, but it does create a fairer arrangement for UK operators.

“Road charges and tolls are part and parcel of operating a truck on the continent.  It is only right that foreign HGVs using UK roads should do the same.  FTA believes that the benefits of the HGV levy for UK operators will go beyond the charge that foreign carriers must pay from 1 April.  The associated extension and upgrading of the DVSA and DVA roadside enforcement cameras network offers the potential for more effective enforcement of foreign HGV safety standards.”

There are a series of bans that hep to structure the levy, reflecting vehicle type, weight and number of axles, and  UK operators will pay the levy at the same time as they pay Vehicle Excise Duty in one transaction to make it easier administratively – although it should be noted that the government is reducing VED so that more than 9 out of 10 UK vehicles will pay no more than now.

It is a legal requirement that foreign operators must pay the levy before using UK roads with charges varying between £1.70 and £10 per day or £85 to £1,000 per year. And if they don’t pay, then fines are to be imposed, although the BVRLA aren’t happy with those. “The government responded to our calls for tougher penalties for non-payers, but we feel that increasing the fine from £100 to £300 will not be enough of a deterrent to stop some hauliers chancing their arm.”

This action is part of the Government’s plans to help the British Motorist, and especially the haulage industry; they claim. Already they have frozen HGV vehicle excise duty in the recent budget with duty on standard diesel is now lower than it was in October 2010, and they have also “invested £3.3 billion in major road schemes which will provide over 500 miles of additional lane capacity to the strategic road network and £10.7 billion to add at least 400 miles of capacity on the busiest motorways.”