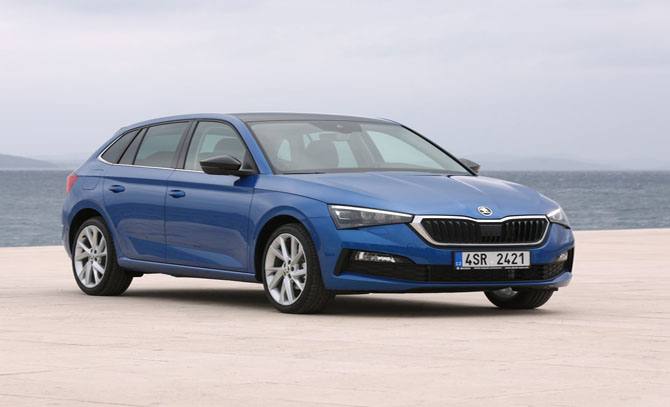 The new Skoda Scala – a replacement for the now extinct Skoda Rapid – is available to lease from Nationwide Vehicle Contracts with some great deals.

Described by Auto Express as "a real achievement" and "among the best of its breed", Skoda's rival to the VW Golf is certainly a viable opportunity to the German classic. It’s a cheaper option than the Ford Focus, Kia Ceed, Vauxhall Astra, and even its own sibling, the Skoda Octavia. Both What Car? and Top Gear had good things to say about the new 2019 version of the Skoda Scala too.

The Scala is Skoda’s attempt to plug the gap between its very own Fabia and Octavia. It has a style all of its own – including a prominent and aggressive front grille, a longer body than both the VW Polo and Seat Ibiza and three S, SE and SE L trims. There are three engines available, with four different outputs, with either five or six-speed manuals or a seven-speed DSG paddle shift. Although it’s not sporty, the Skoda Scala is functional and more than just a car to show off.

Don't expect to be wowed, but get yourself ready to be pleasantly delighted. The driver's seat is comfortable and adjustable, although it could be considered quite a narrow space to sit in. There’s a wide range of steering wheel adjustments and plenty of storage space for smaller items such as sunglasses and phones. In the back the leg room is on par with the Octavia, there’s generous head room a couple of very comfy head rests – making the Scala exceptional for its class. Two passengers would fit in easily and there would be a comfy squeeze with three adults. The rear seat folding arrangement is a fairly conventional 60/40 split and the Scala’s 467-litre boot has enough room for around seven carry-on suitcases (more than the Focus or Golf).

When it comes to controls, analogue instruments are used all the way up to the top of the range SE L models. They offer a 9.2" digital screen with traditional buttons and knobs for all the major features — including the climate control. The S Trim brings a 6" touchscreen and DAB Radio, whereas the entry-level SE trim brings an 8" touchscreen with SmartLink, along with a DAB radio and Bluetooth. Finally, the SE L has been installed with a 9.2" screen with in-built sat-nav and infotainment online. When driving, visibility is good from the front and the back, plus there’s rear parking sensors as standard, and all trims come with LED dipped headlights. 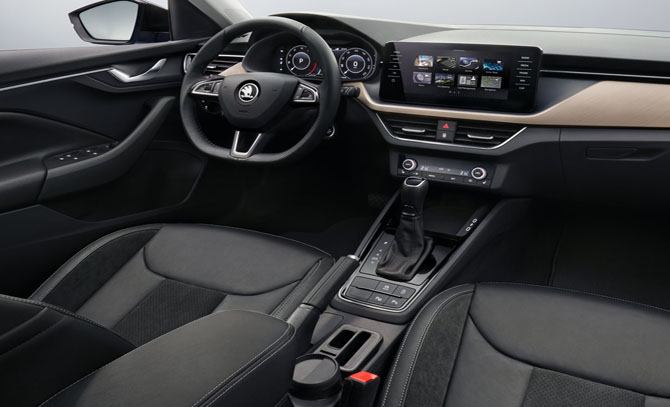 The Skoda Scala is available with an extensive range of engines, including two 1-litre three-cylinder petrol engines with 94-bhp and 113-bhp. There’s even a 1.5-litre four-cylinder petrol engine with 148-bhp and a 1.6-litre diesel with 114-bhp, all with a six-speed manual gearbox. There’s an option for a seven-speed dual-clutch automatic with all but the least powerful engine.

It reaches 0-62-mph in a generous 10-seconds but longer to reach the top speed of 125-mph. Fuel economy is around 40 to 45-mpg for petrol versions and around 65-mpg for the 1.6-litre diesel and emissions is 113-g/km. All models come with twin front and side airbags and curtain airbags (front and rear) along with driver aids such as lane-keeping assistance, a speed limiter and Automatic Emergency Braking (AEB).

When it comes to the actual drive, there’s enough to keep up with the ebb and flow of traffic as well as a little bit of oomph to help overtake, even the smaller engine size. “On standard suspension the Scala is one of the better-riding cars in the class", although it may not be enough to stop car sickness in the reluctant traveller. The handling, although not class-leading, is acceptable for the car and there’s plenty of grip, good balance, and the steering is pretty precise.

Base S cars offer everything from – 16" alloy wheels, LED headlights and a 6" infotainment screen to tinted windows, air-con and a DAB radio. Plus, front-and-back electric windows, front head and side airbags and standard lane assist, as well as front assist with city emergency brake and ‘easy light assist’.

"Like all Skoda’s, the Scala gets a number of ‘simply-clever’ features to make life easier. Those are a parking ticket-holder mounted on the windscreen pillar, an umbrella in a compartment in each front door, an ice-scraper that doubles up as a tyre tread-depth gauge clipped to the fuel-filler cap, and a cap for the screen-wash that unfolds for use as a funnel."

What Car? suggests "the best thing about the Scala is that even with the more modest specifications, they don’t feel like they’ve been stripped, with lots of reminders of what you didn’t option." It feels complete, not lacking. Overall the Skoda Scala is simple, clear, modest, clean, comfy and functional and surely that’s everything you want from a car?

Nationwide Vehicle Contracts offer 8 different Skoda Scala trims, from the 1.0 TSI SE to the 1.6 TDI SE L DSG. So contact one of our customer service representatives today so they can help you get the very best deal for your Skoda Scala.