The all-new Audi A5 Cabriolet 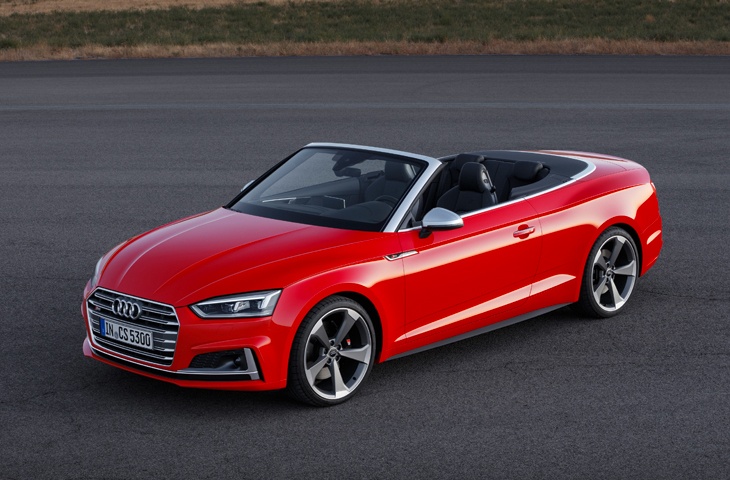 The all-new Audi A5 Cabriolet has arrived in the UK to join its brothers-of-the-road Audi A5 Coupe and 5-door Audi A5 Sportback, bringing the range up to a full compliment.

And it is also joined by the powerful S5 Cabriolet, powered by the same, brand new 3.0-litre TFSI engine seen first in the latest S5 Coupé and S5 Sportback, "bringing 354PS, 500Nm of torque and quattro-enhanced agility to the fore." 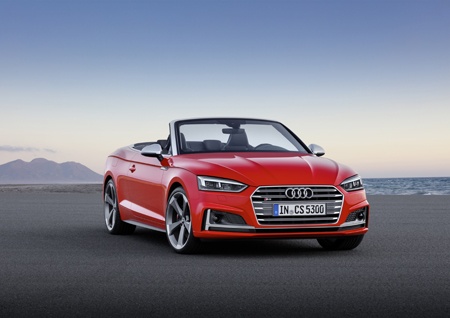 When it came to styling the new Audi A5 Cabriolet, the designers took the sleek lines of the Coupé for inspiration, so the rear window is now flatter, it has short overhangs and a long wraparound bonnet - meaning that the new A5 Cabriolet is 47 millimetres longer than its predecessor.

At the front, we find a three-dimensional Singleframe grille, before following the wave-shaped shoulder line and wheel arch flares back to the rear horizontal lines in realisation of the elegance of the new model.

A third brake light is integrated into the surrounding trim strip of the hood compartment cover, with LED rear lights and optional LED or Matrix LED headlights with dynamic indicators at the front and rear make sure that, even after dark, the high-end technology of the car is visible.

And finally there is the classic soft top that operates with one touch of a switch, opening in 15 seconds and closing in 18, at speeds of up to 31mph.

When it comes to the design side of the drive in the new A5 Cabriolet, Audi have taken a look at all aspects. 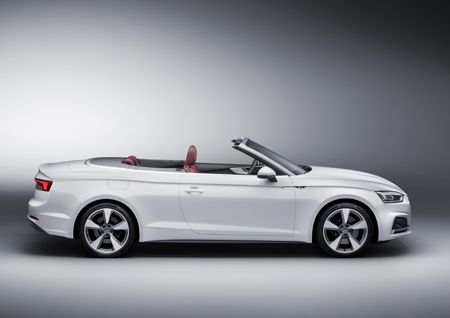 When it comes to the suspension, the carefully balanced tuning of the five-link configuration on both front and rear axles (with adaptive dampers as options) is as important as the wide track and the long wheelbase. The Audi drive select dynamic handling system allows the driver to choose between performance and comfort-orientation, and the newly developed electromechanical power steering offers greater steering precision and great road reaction. Dynamic steering which varies its gear ratio depending on the speed and steering angle is available as an option.

The body of the new Audi A5 Cabriolet is the stiffest in its class and yet is among the lightest in the segment, courtesy of a smart mix of materials and geometric lightweight design. It is 40% more rigid than before, yet 40 kilograms lighter, even with the addition of struts and sills to make up for the lack of a fixed roof. 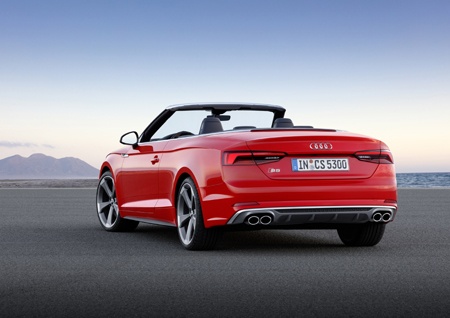 When it comes to the Audi S5 Cabriolet, we are talking different league, with its newly developed 3.0 TFSI six-cylinder engine that features quattro permanent all-wheel drive and the eight-speed tiptronic transmission as standard. Producing 354PS of power, the top-of-the-range model accelerates from 0 to 62mph in 5.1 seconds up to an electronically governed top speed of 155mph. 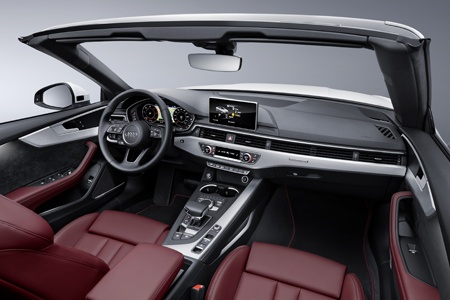 Inside, there is more space for the driver and passengers with front-row shoulder room increased by 26 millimetres and kneeroom in the rear by 18 millimetres.

Designers have made the instrument panel horizontal to increase space awareness and high-grade materials in different colours ensure an overall feel-good atmosphere, with the ambient lighting able to adjust to 30 different shades to create whatever mood is required.

With the hood closed the luggage compartment has a capacity of 380 litres, and the rear seats a 50:50 split that can be easily folded forward using levers in the luggage compartment. The tailgate on the A5 Cabriolet now opens automatically as standard using the remote control key or the button in the driver’s door, with gesture control available for the tailgate as an option.

All UK A5 Cabriolet models (depending on models) bring features such as 17" or 18" alloy wheels, xenon or LED headlamps, the Audi Smartphone Interface, leather upholstery, front seat heating, acoustic parking and three-zone climate control, with Sport models adding in appropriate upgrades such as front sport seats with electric adjustment (Sport and S line) and sports suspension (S line only – optional for Sport). 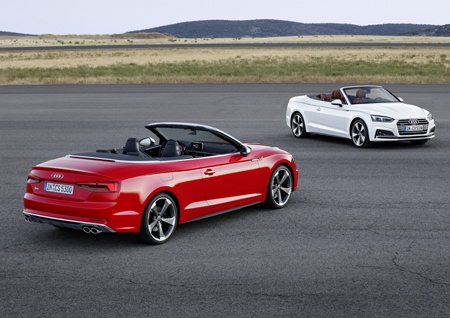 The S5 Cabriolet has its own exclusive specification that includes 19" alloy wheels, S specific styling, front Super Sports seats in Fine Nappa leather and chassis settings and hard disc-based MMI Navigation Plus including a three-year subscription to Audi Connect.

For more information about leasing the new Audi A5 Cabriolet from Nationwide Vehicle Contracts, contact one of our Customer Service Representatives now.