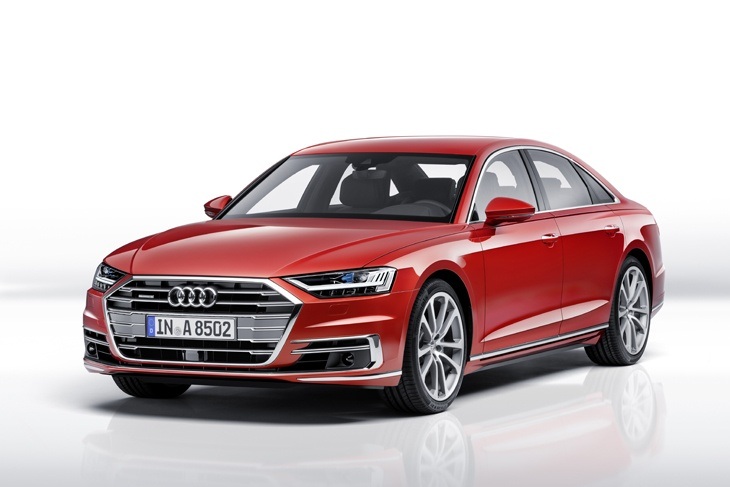 The Audi brand is renowned worldwide for consistent innovation in design and engineering, for lightweight construction and for quattro permanent all-wheel drive –  something already found in the existing Audi A8.

So when Audi claim that the 4th-generation A8 that will be available to order in September will be "setting the benchmark for Vorsprung durch Technik," then we need to sit up and listen.

It promises a new design language, an innovative touchscreen operating concept and systematic drivetrain electrification, and claims to be "the first production car in the world to have been developed for highly automated driving" as Audi take piloted driving functions such as parking pilot, garage pilot and traffic jam pilot into production from 2018.

The new Audi A8 exterior 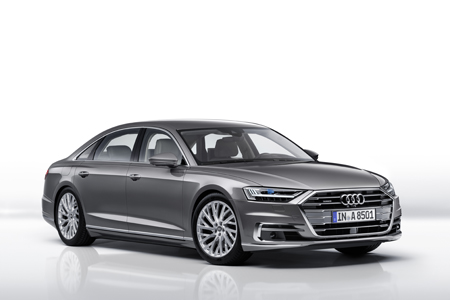 The new Audi A8 defines the beginning of a new design era for the entire Audi brand.

At the front there is a wide, upright Singleframe grille that itself exudes power, before following fluid, muscular lines that convey the elegance and sophistication that you would expect from a luxury saloon to the gently inclined rear with its LED light strip and OLED technology, creating visual tension which starts with striking HD Matrix LED headlights with Audi laser lighting.

Available in 5.17-metre ‘standard’ form or as the A8 L with a 13cm longer wheelbase, the new A8 makes a statement on the road.

The new Audi A8 interior

As What Car? revealed recently, comfort and space is at the forefront of many drivers' wants and needs, and with the A8, the increased length combined with sublime surroundings gives it in spades - "from the perforation in the seat upholstery to the electrically opening and closing shutters on the air vents." 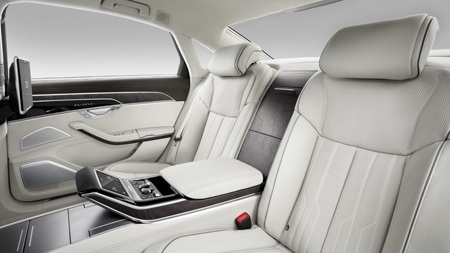 With drivers normally getting the best seat in the house, the A8 offers an alternative to that by making the rear left seat "the most sought-after seat." Available as an option, it can be made into a relaxation seat with four different adjustment options and a footrest where the passenger can warm and massage the soles of their feet on a unit with multiple settings incorporated into the back of the front-passenger seat.

Rear passengers are no longer slaves to the whims and wishes of the front as they have their own controls where they can operate personal ambient lighting, new HD Matrix reading lights and seat massage, and can make private phone calls via a separate operating unit.

The new Audi A8 controls 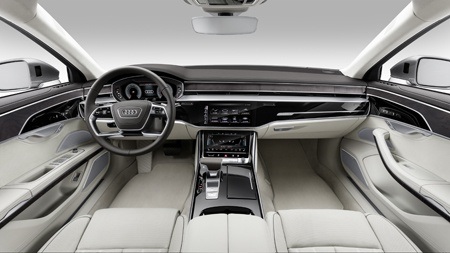 Luxury doesn't necessarily mean a huge array of switches and buttons to control everything; in fact, in the new Audi A8 it is as minimal as possible, with clear architecture horizontally aligned. Audi has got rid of the familiar rotary pushbutton and touchpad of the predecessor model in favour of an instrument panel which is largely free of buttons and switches with a 10.1" touchscreen display at the centre of everything. But even that isn't obtrusive as it blends almost invisibly into the high-gloss black surround thanks to its black-panel look.

As soon as the car is opened, the user interface appears. The driver controls the Infotainment system via fingertip on the large display, with the option of using the second touchscreen display on the centre tunnel console to access the air conditioning and comfort functions. And a sound click is heard once completed so the driver knows it has worked. "The combination of acoustic and tactile feedback along with the use of common touch gestures such as swiping make the new MMI touch response especially safe, intuitive and quick to use."

An array of functions can also be operated via voice control.

The new Audi A8 self-controls

Audi make the bold statement that "the new A8 is the first production car to have been developed specially for highly automated driving." with the Audi AI traffic jam pilot taking charge of driving in slow-moving traffic at up to 37mph on major roads where a physical barrier separates the two carriageways. 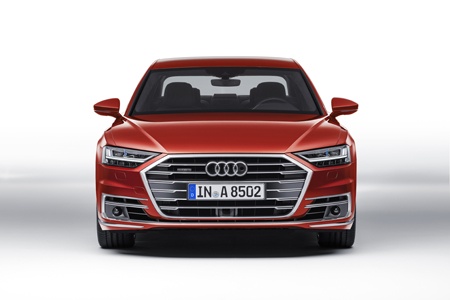 Activated using the AI button on the centre console, the traffic jam pilot manages starting, accelerating, steering and braking, even allowing the driver to watch the on-board TV if it's legal to do so. As soon as the limit of its ability is reached, the system tells the driver to get back into the saddle.

The driver no longer needs to monitor the car permanently. They can take their hands off the steering wheel permanently and, depending on the national laws, focus on a different activity that is supported by the car, such as watching the on-board TV. As soon as the system reaches its limits, it calls on the driver to take back control of the task of driving.

Needless to say, Audi are aware of differing attitudes and legalities country-by-country when it comes to car autonomy. Audi will therefore be adopting a step-by-step approach to the introduction of the traffic jam pilot in production models.

The new Audi A8 engineering

Featuring new dynamic all-wheel steering and Audi AI active suspension, the new A8 will make its debut with two extensively re-engineered V6 turbo engines: a 3.0 286PS TDI and a 3.0 340PS TFSI. An eight-cylinder TDI – a 4.0-litre with 435PS – will follow slightly later.

All feature Mild hybrid technology (MHEV, mild hybrid electric vehicle), an extended start/stop function and energy recovery output of up to 12 kW, all of which work together to bring down the fuel consumption of the already efficient engines even further – by as much as 0.7 litres for every 100 kilometres (62.1 miles) covered in real world driving conditions.

An A8 L e-tron quattro, complete with powerful plug-in hybrid drivetrain will also follow at a later date along with : Audi Wireless Charging where an installed pad in the garage floor transfers the power inductively to a receiver coil in the car.

The new Audi A8 and A8 L will be appearing on UK roads in late 2017 and we will have more news on them later this year.