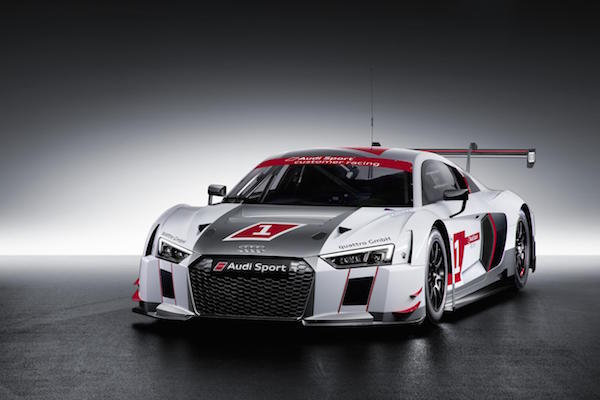 As the world of sportscar racing is constantly evolving, the manufacturers involved with providing the means for teams to compete across the globe have to combat the raft of regulations for the classes that their cars will go into battle to compete for glory.

At this week’s Geneva Motor Show, the new Audi Sport R8 LMS was officially unveiled during the customary Audi Press Conference, with Swiss racer Rahal Frey driving the new race machine onto the stage, which coincided with the official public unveiling of the new R8 V10 Plus and e-tron variants.

In 2016, the regulations for the GT3-specification machines will be heavily revised, but it is a task that Audi took very seriously, having started development of the new racecar back in the spring of 2014.

The first generation R8 LMS has taken its fair share of victories over its five-year lifespan, which has culminated in the following statistics: 26 GT3 championship victories, 23 overall titles in other categories and 7 overall wins in 24-hour races, which includes the Spa 24 Hours and Nürburgring 24 Hours.

Over 130 cars have been sold from the Audi Sport Customer Racing division since 2009, which is based at the quattro GmBH outfit at Neckarlsum. As Audi has already committed to many championships using the outgoing model, the next generation R8 LMS will be available for customer teams to order in the second half of the year.

Quattro GmBH will then planning to deliver the first models by the end of this year, so as to ensure a welcome transition for the 2016 racing season. As per the standards that Audi Sport ensure in terms of the safety aspects that were pioneered in the LMP1 class, this level of thinking continues into the GT3 machinery, which exceeds the necessary standards required by the relevant governing bodies. This includes the Audi Protection Seat PS1, which is connected to the chassis for further stiffness, working with an adjustable steering column and foot pedal set up for better adaptability for drivers in general.

The new car’s base weight is 25 kilograms less than the outgoing model, which is thanks to the mix of materials, including an intelligent mix of aluminium in the Audi Space Frame, carbon fibre and steel roll cage. The new cars will still be produced on the factory floor, until they are primed and ready to be moved to Heilbronn-Biberach, where they will be completed ahead of delivery.

The aerodynamics of the car are somewhat of a departure from the first generation, as Audi Sport have been able to benefit from a smooth underbody floor, which works in conjunction with an integrated rear diffuser, which helps to increase downforce greatly. This is even with the restrictions that have been imposed regarding the GT3 regulations from next year onwards.

A raft of changes on the other aspects of the car, which includes the engine, electrics and gearbox, still will give Audi a good chance of going for victory through the many championships that they compete in, which includes the Audi R8 LMS Cup that takes place in Asia every year.

But they will have to watch out as their rivals from Stuttgart have just unveiled the new Mercedes AMG GT3, which looks to continue the run of form that its precedessor, the SLS AMG GT3 has had over the year.

“Vorsprung Durch Technik” has shown its hand it what Ingolstadt is capable of, when it comes to producing a production-based race car, but the talking will have to be done on the track, when the new R8 LMS makes its racing debut in early 2016.