Pebble Beach in California at this time of year is not only full of ‘the beautiful people’; it’s also full of beautiful cars at the Pebble Beach Automotive Week where the very best show off their very best to the very rich, famous and, well, beautiful. It all kicks off this Thursday (14 August) so we are looking at what some of the most revered makers of ‘beautiful’ cars have in store for us to see, drool over and desire (without really having any chance at all in getting) in a setting that befits its position in the social standing of automobile world.

It was at the Pebble Beach Concours d’Elegance that the bespoke McLaren Special Operations division was launched in 2011, and this year it’s back to show off some of their finest work, including some unique examples of the McLaren P1™ and the recently launched MSO 650S Spider.

Like Q by Aston Martin the McLaren Special Operations division offers a full personalisation service for McLaren owners, taking us back to the heady days of McLaren’s Customer Care programme which looked after servicing and maintenance for the cherished McLaren F1 roadcar. 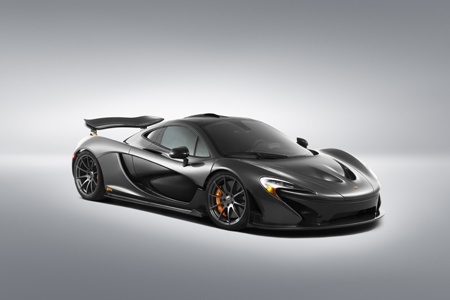 The commission on show at Pebble Beach came courtesy of a North American customer, and the McLaren team have had a great time using a whole host of bespoke options on the motor in order to make it stand out from the crowd – as much as a 916PS, 217 mph hypercar could do! Being seen in public for the first time, and making use of the famous McLaren Orange paint throughout to highlight the car’s aerodynamic form, it is without doubt one of the finest examples that McLaren could use to showcase what MSO can offer on the McLaren P1™.

There are only 170 other models in existence of the McLaren P1™ but it still is a task to make it stand out from the others, so the MSO team have used silver finishing at the front on the aluminium radiator grilles that sit below the gloss carbon fibre bumper and added a McLaren Orange speedmark onto the bonnet – subtle changes that are also followed throughout the entire car. 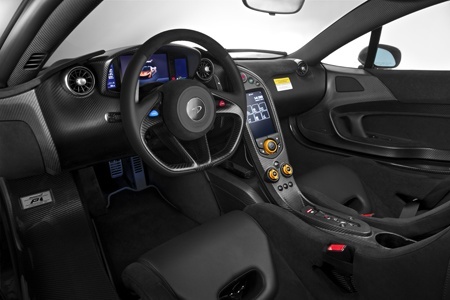 The bodywork itself is finished in an exclusive rich metallic Sterling Grey, which complements the gloss carbon fibre, and is punctuated by further McLaren Orange accents. There are also brake callipers finished in the heritage colour, body-coloured alloy wheels, and an orange ‘P1’ logo on the leading edge of the rear wheel arch.

At the back of the car we can see that real money is in full effect here in California with 24 carat gold heatshields fitted around the engine bay and inconel exhaust, just as they were on the no-compromise McLaren F1 of the 1990s and still are on McLaren Formula 1™ cars.

Inside, the interior has been tailored using carbon fibre and Alcantara®, with the bespoke MSO steering wheel also being upholstered, and Stone Grey binding and stitching on all upholstery, and McLaren Orange accents on the centre console. 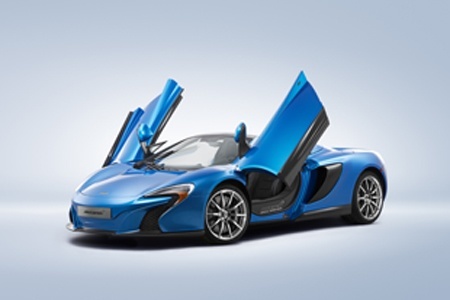 McLaren Special Operations will also be showcasing a one-off version of the MSO 650S Spider, a true one-off that has been designed in collaboration with McLaren Newport Beach and McLaren Automotive Design Director Frank Stephenson. The MSO 650S Spider is based on the a car that made its debut at this year’s Goodwood Festival of Speed – the already exclusive MSO 650S of which there are only 50 models – thus making it (probably) doubly exclusive.

The exterior of the MSO 650S Spider has been finished in a bright and eye-catching deep gloss Cerulean Blue, exclusively designed by MSO with a heavy metallic flake, which contrasts with the satin carbon fibre detailing seen on the front bumper, side air intakes, rear bumper middle section and large MSO rear diffuser. Chrome has been used as an added visual incentive on the exhaust finishers and the 10-spoke Super Lightweight alloy wheels. 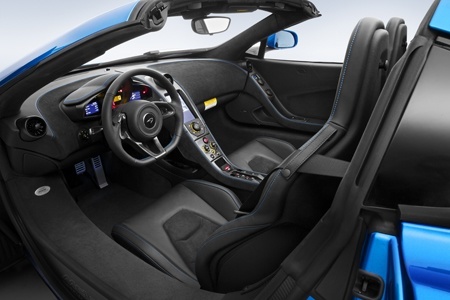 Inside the cabin we find carbon black leather upholstery with a contrasting blue stitch throughout, right through to the steering wheel, dash and doors. There’s also a McLaren speedmark embroidered into the headrests on the seat.

And just to finish off the exclusivity, the MSO 650S Spider also has a dedication plaque, signed by Frank Stephenson, and you even get a luxury McLaren Special Operations leather holdall, handcrafted from carbon fibre leather and complemented by dark chrome metal finishers.

It’s not that we are ever going to be able to afford these cars or probably even a trip to see them at Pebble Beach – but there’s no harm in looking, drooling and marvelling at what is, after all, great British technology.