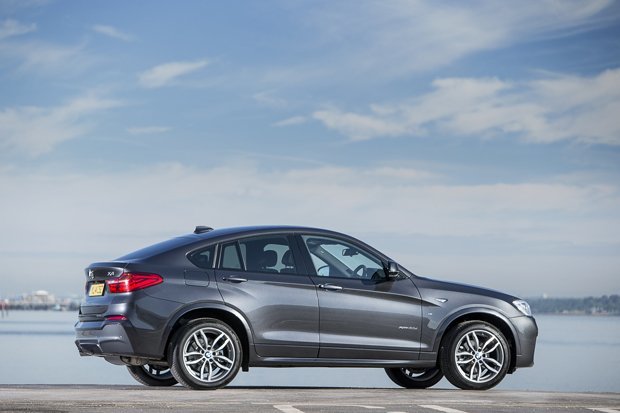 Available now to lease from Nationwide Vehicle Contracts, the new BMW X4 is the latest member of the BMW X4 family, linking together all the X family features and a classical coupé sporting elegance and ending up as BMW’s first Sports Activity Coupé (SAC) for the ‘premium mid-size segment’. 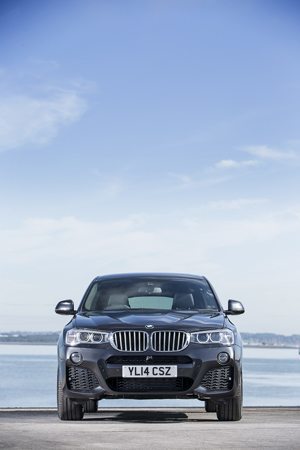 Think what the son of a late-night forecourt liaison between a Sports Activity Vehicle (SAV) and a classic coupé will look like – and then think how much better it will look having been through BMW processes and with a BMW badge on it.

With looks honed from the BMW X6 and X3, the BMW X4 still manages to grab a lot of character for itself. There are large air intakes positioned on the outer edges of the front end that combine with front apron character lines to make the car look muscular and agile – something that it obviously is with a lower centre of gravity than some of its siblings, enhanced by the fog lamps positioned below the signature twin headlights.

The roofline brings to mind a coupé with its highest point over the front seats, as many BMW drivers will appreciate already, with the contoured C-pillars, muscular shoulders and the broad and low-set rear end all promising a BMW X4 performance before the engine has even been turned on!

Inside the BMW X4, designers have tried (and succeeded) to create a “harmonious synthesis of sportiness and exclusivity” by using only the very best premium materials in the cabin; including subtle electroplated accents, a high-gloss black-panel look and aluminium trim strips in the wood panelling.

All seats sit lower to make the car feel sportier (the driver and front passenger sit 20mm lower and rear passengers 28mm lower than in a BMW X3) and more like that of a classic coupé. But it’s still able to fit a lot into it (including passengers) with its standard 40:20:40 split-folding rear seats usability that offers up a load capacity of between 500 and1,400 litres, aided and abetted by the standard-fit automatically opening tailgate. 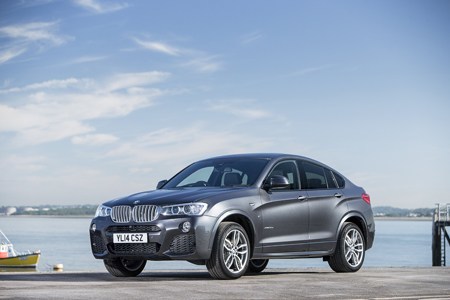 For those of you who know just how ‘equipmented-up’ a BMW X3 is, it’s time to think again with the BMW X4 with a list of standard equipment that other cars only offer as optional extras. We are talking; the automatically opening tailgate, Variable Sport Steering, 18-inch light-alloy wheels, front and rear Park Distance Control, Performance Control, Xenon headlights, the BMW X4 40:20:40 split-folding rear seats, a Sport leather steering wheel, Heated front seats and the BMW Business - although you can, of course, take advantage of optionals such as Satin Aluminium exterior trim, Dark Copper interior trim, Sport seats and exclusive xLine leather upholstery.

Really; all I need to say when it comes to the question of “How does the BMW X4 drive?” is: “All BMW X4 models have a sporty suspension set-up and come with BMW’s intelligent xDrive all-wheel-drive system as standard”.

Speaks for itself really! 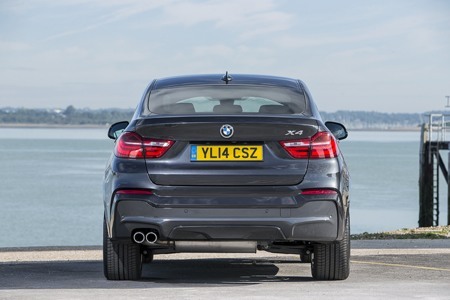 From launch, the new BMW X4 will be available with a choice of three diesel engines, all of which meet the EU6 standard and all of which feature BMW TwinPower Turbo technology that ensures that performance is maintained while fuel consumption and CO2 emissions are kept to a minimum.

Under the bonnet of the BMW X4 xDrive20d is the newly developed and all-aluminium 2.0-litre diesel engine that develops 190hp at 4,000rpm with a peak torque of 400Nm and accelerates from 0-62mph in just 8 seconds.  As standard, the X4 xDrive20d comes with a six-speed manual gearbox but there is the option of an eight-speed automatic transmission which brings fuel consumption down to 54.3mpg and sets CO2 emissions at 138g/km. 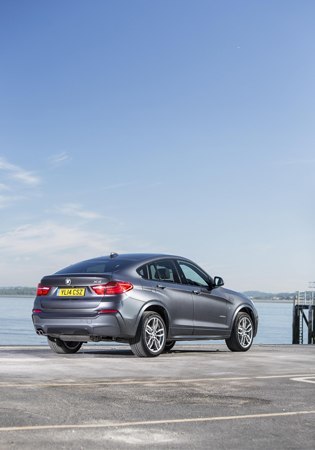 The BMW X4 xDrive30d  has a standard eight-speed Sport automatic transmission that is paired with a 3.0-litre six-cylinder in-line engine, returning a combined mpg of 47.9 with CO2 emissions of just 156 g/km, outputting 258hp at 4,000rpm with a peak torque of 560Nm from as low as 1,500rpm, and an acceleration of just 5.8 seconds from 0-62mph.

And finally there is the X4 xDrive35d engine topping the BMW X4 line-up where the 3.0-litre diesel engine delivers 313hp with a peak torque of 630Nm on tap from between 1,500 and 2,500rpm. Fitted as standard is a Launch Control that helps the 5.2 seconds 0-62mph acceleration up to a 153mph top speed – yet with all this power and acceleration, fuel consumption is just 47.1mpg and emissions only 157g/km CO2.

In all three models, the BMW EfficientDynamics suite of technologies such as Auto Start-Stop, Brake Energy Regeneration and on-demand operation of ancillary units – all as standard – combine to minimise the fuel consumption and emissions of the new BMW X4. And by adding in the optional extras of 17-inch aero wheels with reduced-rolling-resistance tyres, CO2emissions on the BMW X4 xDrive20d and xDrive30d  can be reduced by a further 7g/km. (Even more fuel savings can be made by using the BMW Driving Assistant that offers advice on problems ahead that may cause extra fuel usage and suggests alternatives.)

And it almost goes without saying (but we will say it anyway) that the BMW X4 also comes with BMW ConnectedDrive and its class-leading technology in the link-up of driver, vehicle and the outside world.

An exclusive leasing offer from Nationwide Vehicle Contracts on the BMW X4 is available here.