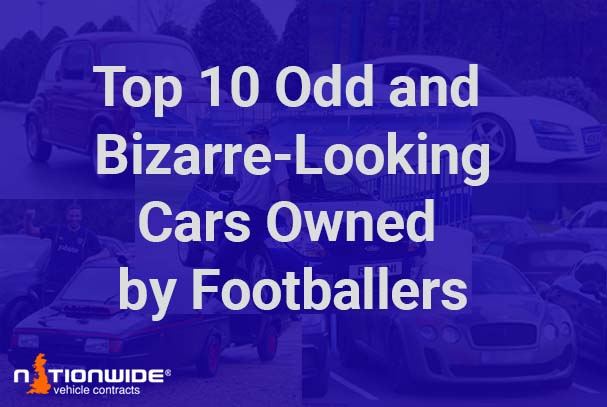 Our list features a wide range of price tags with some cars valued between £1,000 to £1,000,000 and vehicles with only three wheels opposed to the traditional four wheels. This list presents cars that make you think about these players' minds when purchasing such a bizarre-looking motor.

Being a professional footballer has its benefits, one of those being able to afford some of the world's most expensive cars. However, being able to afford the most expensive cars doesn't necessarily mean you have the best-looking cars. This list of footballers with their vehicles and shows doesn't matter how much money you have it can't buy you taste.

The Audi R8 is a two-seater German sports car that benefits Audi's trademark Quattro permanent all-wheel-drive system. The R8's V10 engine provides incredible power behind the wheel with also having dynamic handling for a smooth ride.

The former Ireland international purchased this German supercar during his time playing for Manchester City. The R8 went through £10,000 respray from its original white body with red trim. Stephen's teammates were apparently "outraged" that the car associated with Manchester City's rivals, Manchester United, who play in red. Don't worry as Stephen kept the superman petrol cap after the respray, for which the car is most famous for having.

The ex-Manchester City player also bought a pink trim Range Rover to add to his reputation of owning wild-looking luxury cars. A Range Rover is a more practical choice of a car when he's out playing golf in his free time however the selection of paint job again lets Stephen's taste in motors down.

The Mercedes-Benz SLR McLaren is considered the "Ultimate Sports Car" by Mercedes because it combines the German technology's best with McLaren's lightweight engineering skill. The two-seater sports car has a 5.4litre V8 engine that can cover the 0-62mph benchmark in an impressive 3.4 seconds.

The former Arsenal defender wasn't afraid to be spotted in the streets of London with his Mercedes-Benz SLR McLaren as it's undoubtedly a paparazzi magnet. If you thought keeping fingerprints off your phone or Laptop was terrible enough, spare a thought for William Gallas. This £350,000 mirror on wheels we imagine must be a nightmare to keep whipping clean. Paint job aside the Mercedes-Benz SLR McLaren is a beautiful car and was once considered the fastest convertible globally.

Unfortunately, William Gallas being just over six-foot-tall means the two-seater sports car doesn't leave much room for any passenger who wishes to ride with the footballer.

Nile Ranger, a former Newcastle United striker, thought it was a great idea to add an "R" onto the "RANGE" logo of his Range Rover Sport to spell out his last name. Nile Ranger also customised his SUV by adding his nickname "POWER RANGER" to the vehicle's back.

Apart from the awful modifications, Nile added to his motor the Ranger Rover Sport is a well-respected car in the football community. The luxury SUV stands out in your typical car park. However, it's a familiar sight seen in most football training grounds. It comes in at the top of the table for a most common luxury car bought by footballers.

Pierre-Emerick Aubameyang has an extraordinary car collection. Pierre-Emerick's LaFerrari is his most impressive and expensive vehicle valued at around 1 million British pounds. Ferrari's LaFerrari features the most advanced and innovative technical solutions in the Ferrari range. The LaFerrari is the first-ever production car equipped with F1 derived hybrid solution, which combines an electric motor producing 150 CV with Ferraris classic V12 engine.

The Arsenal striker has a taste for chrome as all five of his supercars wrapped in either Holographic chrome or Chrome Gold. Pierre-Emerick getting his LaFerrari wrapped chrome was controversial with the Ferrari community. The limited-edition Ferrari is one of only 499 models globally, and the rest of the 498 remain in their unique red paint jobs.

Aubameyang is unquestionably a fan of Lamborghini as the Arsenal striker owns a Lamborghini Huracan Spyder, Lamborghini Aventador and not one but two Lamborghini Urus 4x4s. All four Lamborghinis wrapped in Aubameyang's signature chrome colourway. All five of the striker's supercars are undoubtedly head-turners when driving through London's street with his distinctive style of paint jobs that place him firmly in this list.

The ex-Liverpool forward was a proud owner of a 4x4 Cadillac Escalade. The luxury SUV wasn't luxury enough as Diouf decided to get the vehicle gold plated. The forward certainly had an eye for bling as he customised all the headrests in the vehicle with his initials. With its standout customisations and paintwork, the footballer can be sure to get noticed while driving it.

The Mercedes Brabus G63 AMG 6X6 is a six-wheel pick-up variant of the Mercedes G-Class with a luxury interior. The 6X6 is as good off-road as it is on, due to having a compressor that reduces or increases the tyre pressure to adapt to the driving surface. The compressors allow the 6X6 to change from sandy desert to regular street tyres in less than twenty seconds.

The Bentley Continental GT is a luxury supercar with a 6.0 litre, twin-turbocharged W12 engine and 8-speed dual-clutch transmission for smooth and efficient gear changes. The Supercar comes equipped with electric steering to assist you whilst driving to improve road comfort and stability. The Continental GT even has a dashboard clock made by the Swiss Luxury watchmaker Breitling.

Mario is as controversial off pitch as he is on, whether it's fighting with players or setting fireworks off in his bathroom and burning down half your house. These incidents all relate to Mario, so owning a Camouflage Bentley Continental GT isn't out the ordinary. The ex-Manchester City striker is not typically one to try and blend in which Camouflage usually would represent. However, if this was his intention, it didn't work as he noticed the Supercar attracted more interest on the road. Mario's Bentley Continental GT got some unwanted attention as his Luxury supercar reported being urinated on by a rival Manchester United fan whilst parked in the city centre.

The Seat 600 is a classic city car made in Spain and became the country's most popular car until the end of production in 1973. The Seat 600 was a typical car for most families in Spain between 1960s to the early 1970s, as it was relatively inexpensive.

Sergio Ramos was gifted this Seat 600 from his brother on his 32nd Birthday. The Real Madrid defender's Seat 600 has a burgundy paint job with his initials and playing number "SR4" sticker placed on the car's chassis. The Spain star has an impressive garage already full of luxury vehicles; however, it makes complete sense for the Spanish captain to own such an Iconic car representing his country's history.

The Ford KA isn't the most aesthetically pleasing car to look at but is extremely reliable. The 1.2L Ford KA came with a 4-cylinder engine and wasn't the most spacious three-door vehicle.

England's most prominent striker was a Ford KA's proud owner when he first passed his driving test whilst playing for premier league side Everton. It's crazy to think one of the premier leagues highest ever paid football once owned such an awful looking car. When Rooney got his big-money move to Manchester United, his car collection certainly took an upgrade. His car collection now contains luxury cars like the Bentley Continental GT, Audi Q7, a BMW i8 and an Overfinch Range Rover Sport.

The Reliant Robin is a small three-wheeled car produced by the Reliant Motor Company in Tamworth, England. It was sold in three versions Mk1, Mk2 and Mk3 for 30 years. The Reliant Robin is the second-most popular fibreglass car in history. The single wheel in the Reliant Robin front was responsible for steering the vehicle whilst the engine powers the rear wheels. Having only three wheels made the car famous for rolling over, which meant it wasn't the safest vehicle to drive.

The former England number 1 goalkeeper David James was pictured driving a Reliant Robin for a newspaper. The goalkeeper's squad put their money together and purchased the 3-wheel car. They customised the car with a new resprayed and added a loudspeaker that played out farmyard animal noises. The England star and his teammates agreed that the worst player at training would have to drive home as punishment in the awful looking car.

Leave a comment below and let us know which footballers' car you think is the oddest and bizarre-looking. You can also check out our range of leasing deals across both cars and vans with personal and business contracts available.