Top 10 UK drives to do before you die 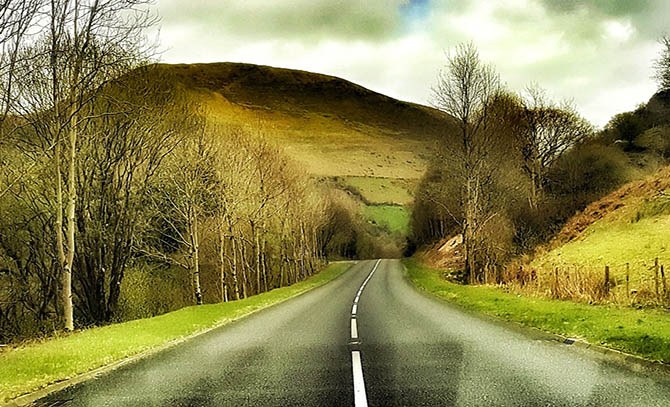 From the Black Mountain Pass in Wales to the Scottish Causeway Coastal Route, we guide you through the best UK drives

Like a family with a tin of Quality Street, everyone has their favourites. While some drivers like to test their nerve with sharp corners, others prefer controlling their cars at a comfortable pace and taking in more of the scenery. So how to compile a list of the best drives in the UK? Embrace the variety that the country has to offer: from mountains to seaside roads to classic country lanes.

Our list features five-mile jaunts alongside scenic sixty-mile excursions, so there’s something for everyone. Our criterion was that each route be distinctively a drive rather than a road trip – no overnight stops needed – so each is comfortably driveable in a couple of hours or less, if you happen to be in that part of the country.

So jump in and let us guide you through our top 10 UK drives to do before you die!

While you can really go wrong for spectacular views in this part of the country, the Bealach Na Ba offers something extra special. Wind your way up to a height of 626m in just over five miles of single-track road – feel your ears pop then enjoy one of the best views in the Highlands. Once you’ve caught your breath you can drop down the other side to the Applecross peninsula where you’ll find more stunning scenery back at sea level.

This Bealach Na Ba (that’s ‘Pass of the Cattle’ in Gaelic) is part of the North Coast 500 route, so is incredibly popular in the summer months, but if you can brave it in the winter and the road is open, it really comes into its own: moody clouds overhead and snow sprinkled on the caps of the mountains. The stuff of fairy-tales.

A series of steep climbs followed by a twisting, undulating highway that unfurls across the stunning Welsh landscape, the Black Mountain Pass is the crowning jewel of the Brecon Beacons National Park. The road peaks at 493m at Foel Fawr, but you can enjoy stunning views throughout the journey as wind your way through hairpin bends sharp enough to test any driver.

If the sight of the Welsh countryside whizzing by either side of you isn’t arresting enough, the huge drops that follow some of the most severe bends will certainly test your stomach and keep you on your toes. Pick a weekday, if possible, so you can enjoy it at your own speed – and keep an eye out for sheep.

The Cat and Fiddle – that’s the A537 between Macclesfield and Buxton, if you’re looking at a map – is a tight, testing 11-mile route that reaches 515m above sea level. It’s been labelled as one of the most dangerous roads in Britain, so it’s no surprise that it’s recently been fitted with average speed cameras, allowing you to take the road at a more leisurely pace and take in the scenery. You can even stop off at the pub from which the road gets its name.

Even so, with a succession of swinging bends will test your steering, it’s not an ideal route for new or unconfident drivers. But if you have the experience and the desire, it’s as exhilarating as is it challenging.

Claiming the crown of England’s steepest road, it’s the gradients combined with some brutal switchback bends make Hardknott’s narrow single carriageway such a challenge. Make your way up Wrynose Pass, with its comparatively gentle 1 in 4 gradients, then continue to Hardknott, where some of the gradients rise to 1 in 3 (about 33%).

If you think the challenge is over when you reach the top, think again. Coming down can be as tricky as going up, especially if you meet someone coming up as you’re heading down: the onus is on the descending vehicle to give way, so you might have to reverse back up the steep, winding pass to find an appropriate place to pull in. Hairy stuff, then, but it’s certainly worth it for the spectacular scenery and the kudos of completing the journey.

Coastal Devon on the A379

Take a trip along the south-west coast, with this 24-mile stretch between Dawlish and Dartmouth is like a tour of coastal communities by road, bridge and ferry. It’s one of the most varied roads on the list and is notable for taking you through swathes of south-west England ripped straight from a picture book of seaside locales.

Snaking along by the sea, the road takes you past the sandy beaches of Dawlish and Teignmouth before crossing the historic Shaldon Bridge over the River Teign estuary, continuing to Torquay and eventually reaching the Dartmouth Higher Ferry, which carries you across the River Dart to picturesque Dartmouth.

The whole 130-mile route offers pure driving pleasure, but the two-hour section that takes you over Torr’s Head and round to the Giant’s Causeway is a must for drivers and sightseers, with spectacular views of the Irish coastline and Scotland alongside hair-raising hairpin bends.

Start at Larne and ascend the North Antrim coast and enjoy seaside views all the way to isolated Torr Head for some first-gear hairpins and views of Scotland ’s Mull of Kintyre. From there, head back inland to Ballycastle and follow the signs for Bushmills, home to the famous whiskey. Then you’re just a short [giant’s] hop from the Giant’s Causeway – just seven minutes from Bushmills and a spectacular way to finish any journey.

Not the most immediately striking of all the roads on the list, this lovely 10-mile wind through the Cheshire countryside has been marked out as one of the best drives in the world. What really sets it apart is its surprising scenery; as you move past Jodrell Bank, look out to your left-hand side and you’ll see the Grade 1-listed Lovell Telescope – at 89m tall and with a surface area of 5,270sq.m, the third-largest steerable dish radio telescope in the world – receiving signals from the sky.

Throughout the rest of the route you’ll experience a classic British countryside drive - all sweeping fields, and trees and hedgerows right up against the roadside. A quintessentially British Sunday drive.

Cutting across the Lake District National Park, this spectacular 30-mile stretch takes you along the banks of both Lake Windermere and Lake Thirlmere, offering cinematic vistas across the water. The surrounding area is overflowing with culture: the landscape provided inspiration for poets William Wordsworth and Samuel Coleridge, while Ambleside Roman Fort has been a feature of the landscape since the second century.

Then, of course, there’s the road itself: a meandering marvel with 24 bends over its course that fluctuates in width, section-to-section, providing plenty of variety to test your mettle. Make sure you go in the middle of the day, though – rush hour can double journey time.

Formed of limestone rather than cheese, Cheddar is England’s longest gorge, formed of 27 cliffs, and was formed during the last Ice Age. The road itself is the B3135, which takes you from the town of Cheddar, through the Gorge and the Mendip Hills, and finally on to Ashwick.

The inarguable highlight of the drive is the sight of the up-to-137-metre, near-vertical cliffs looming right at the edge of the road as you slalom around the bends, making the pass feel even narrower as the rocks pass by. Eventually you can start to relax on the wheel again as the stone of the cliffs gradually morphs into trees on the Ashwick leg of the drive.

A blast across the Yorkshire Dales that’s earned enthusiastic praise from Jeremy Clarkson among others, the Buttertubs Pass is a spectacular five-and-a-bit mile stretch that runs between Simonstone and Thwaite. The road gets its name from local tales of farmers storing their butter in the limestone potholes formed by the rockface next to the road and gained international renown in 2014 when it formed the first stage of the Tour de France.

Most motorists prefer starting at the Twaite end, with a sharp ascent over the first couple of miles leading to spectacular views across the Dales. The surface is better than a lot of other roads on the list, so it’s worth driving throughout the year to see the landscape change with the seasons. Just watch out for the sheep.

Don’t see your favourite route here? Leave us a comment below and tell us what we’re missing.