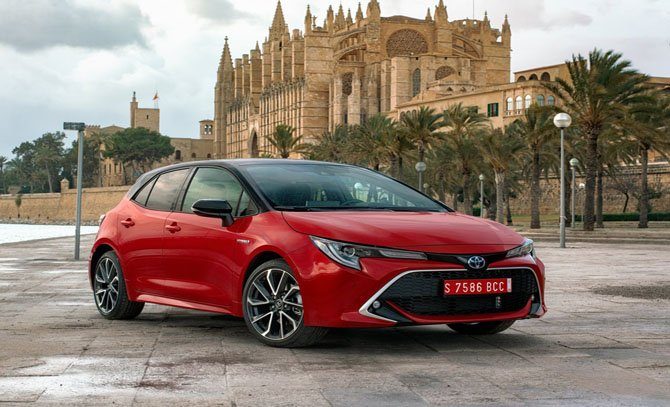 The Toyota Corolla is back and Nationwide Vehicle Contracts are giving you an all access, exclusive review.

Just when you thought the Toyota Corolla had been consigned to the archives of history, having been replaced by the Toyota Auris, we’re excited to announce its back! Even more exciting, it’s now available to lease from Nationwide Vehicle Contracts.

Older readers might remember, since its first production in 1966, the Toyota Corolla sold 46 million sales worldwide. Despite this, manufactures decided to ‘replace’ it with the Auris, by simply changing its name.

But now Toyota have produced a striking new model they have branded Corolla, and have positioned it as a family car up against the likes of the Volkswagen Golf, Ford Focus and Skoda Octavia with the options of petrol and hybrid versions.

The Toyota Corolla undoubtedly looks good from the outside, so it will get more than the odd glance from admirers. Plus, even at the basic level you'll find that it is impressively plush inside.

The standard 8" touchscreen infotainment system offers instant, albeit limited, technology. However, SatNav isn’t standard and Apple CarPlay or Android Auto are not included.

Space inside the front of the vehicle is adequate and comfortable, although rear passenger space is a bit of a squeeze because of the sloping roofline. The boot is snug, for a family sized car.

However, Toyotta have provided the option of two hybrid engines – a 1.8 or 2.0-litre petrol – both offering automatic gearboxes, low emissions and cheaper running costs.

Whether you choose the hybrid engines or the smaller 1.2-litre petrol engine, the Toyota Corolla is an enjoyable ride with precise steering and is comfortable at all speeds. In hybrid electric mode, it is "at its best around town, where a patient driving style will allow you to get between plenty of junctions and traffic lights using next to no petrol at all", and is certainly an improvement on the Auris. 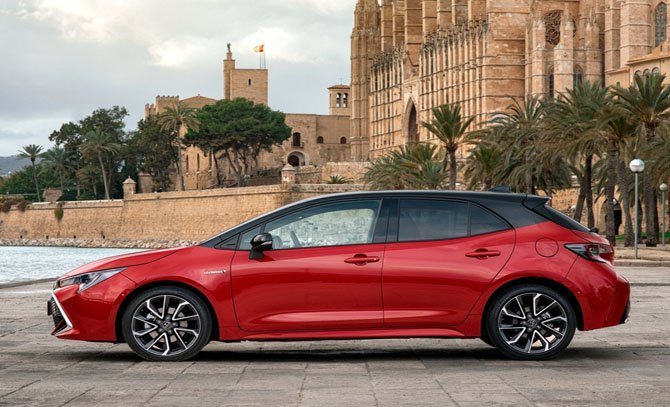 As we have already said, the Toyota Corolla looks good.

Based on the Toyota New Global Architecture (TNGA), the interior subtle polished metal lines give the cabin an upmarket look and feel at every grade.

There are three body styles – a five-door hatchback, an estate and a small (hybrid-only) saloon.

All Toyota Corolla models have been designed with a centrally positioned 8" touchscreen infotainment system on the console, perfectly positioned for the driver.

Part of the standard specification, it is a limited system and certainly not for those who want a tech-savvy option. To give credit where credit is due, it is easy to use, with plenty of shortcut buttons available for navigation.

SatNav is an optional extra, as is a head-up display that is fully configurable. However, Apple CarPlay and Android Auto are not yet available, so if tech is important to you other cars might be more suitable.

As standard, the Corolla comes with a six-speaker stereo, but you can upgrade to a JBL sound system if you prefer. 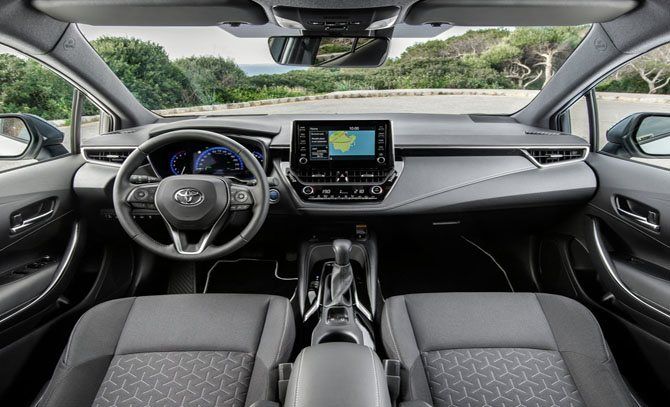 As soon as you sit in the new Toyota Corolla, it is evident this is a car that has been designed with the driver in mind. Comfortable seating is low and gives a good view of the road ahead, thanks to the design of both the instrument cluster and the bonnet.

As standard, the driver seat is heated, height positioning is adjustable and there is back support. Although, for a family car, space in the back is not as you would expect, even though it is on a par with the Ford Focus and the Vauxhall Astra.

Unfortunately, the rear doors don't open wide, so it could be difficult to fit a baby seat into the ISOFIX anchor points. The sloping roofline is a minor problem when it comes to comfort – making getting in and out of the vehicle a feat. However, the saloon and estate versions of the Corolla are better for rear passengers, because of the increased space between the front and the rear wheels.

There are plenty of storage areas all over the car, and even a wireless charging cubby hole for the driver’s phone.

The 361-litre boot isn’t as big as the VW Golf and Vauxhall Astra, but there is more space than in the Ford Focus. For example, there’s enough space for a set of golf clubs, or a baby buggy tucked under the parcel shelf, or a family shopping trip.

In hybrid models, the boot houses the car battery, so there is less space, but the back seats fold down to allow large items to fit in. In fact, "with the back seats folded there’s space for a bike with both its wheels attached – whichever model you pick."

The Toyota Corolla is available with a choice of three petrol engines – two of them hybrids. The smallest is a 1.2-litre turbo non-hybrid making 114hp, it comes with a six-speed manual transmission which allows 0-62mph at 9.3 secs.

The mid-range 1.8-litre hybrid offers better performance at higher speeds, plus you also have the choice of the electric motor option. Although, its 0-62mph time is slower than the petrol-only engine.

The 2.0-litre engine hybrid is the fastest of the engines and reaches 0-62mph in just 7.9 seconds. It offers extra performance with low running costs, has great fuel economy and a quiet cabin.

It is expected that the vast majority of Corolla sales will be electric/hybrid, with the 1.8-litre engine likely to be the most popular. Especially as it offers somewhere between 55mpg and 65mpg on joint usage, with combined CO2 emissions of around 73g/km.

The Toyota Corolla is focused on offering a comfortable drive, even over bumpy road surfaces. It also features impressive direct steering that rivals the VW Golf.

When driving on the motorway, you can take advantage of the adaptive cruise control and lane-keep assist. Whereas, when you’re driving around town the reversing camera, which is standard on Icon Tech models and above, takes all the strain out of reverse parking. 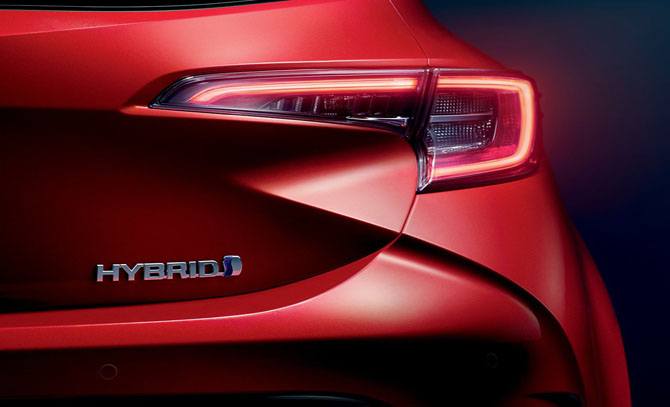 The Icon Corolla is the entry-level model, and comes with:

And finally, the top-of-the-range Excel Corolla: 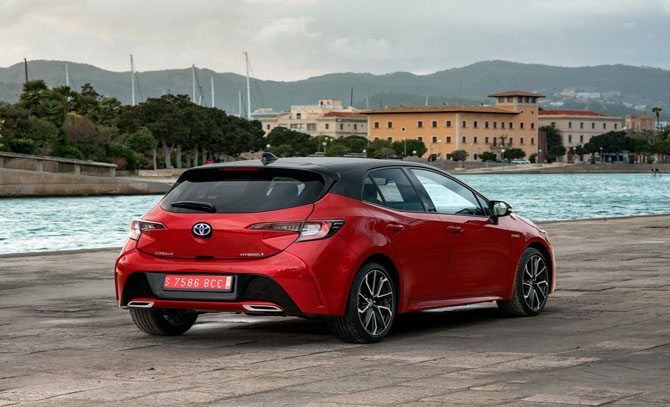 In an ultra-competitive class, the new Toyota Corolla will hold its own, thanks to its name and reputation. It is not the most exciting car in the world, and the internal rear passenger space can leave a lot to be desired. But, for economy and running costs it is sufficient. If you need an economical car to get you and your family from A to B, it deserves a place on your consideration list.

Have another question about the new Toyota Corolla? Leave a comment below or call Nationwide Vehicle Contracts on 0345 811 9595 to speak to one of our leasing specialists.