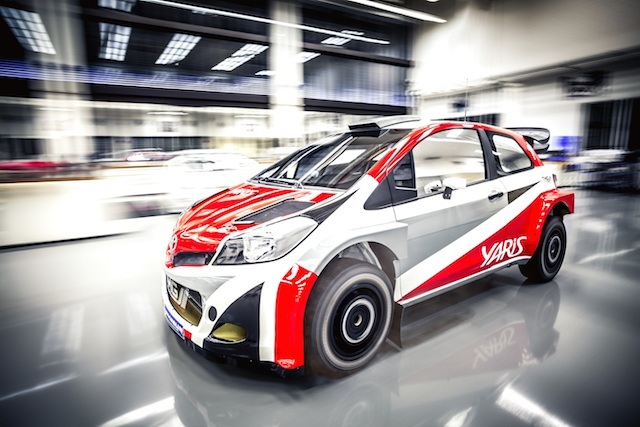 TOYOTA will become the latest high-profile manufacturer that will join the ranks of the FIA World Rally Championship at the beginning of the 2017 season, whilst developing the new Yaris WRC over the next two seasons before making a full-blown return to rallying.

The Japanese brand has been rumoured over the past couple of years to rejoin a highly-competitive series that travels the globe, with all drivers battling over varying road surfaces and in different weather conditions.

TOYOTA Motor Corporation President Akio Toyoda made the news public during the yearly conference held in Tokyo, where the forthcoming challenger to Volkswagen’s Polo R WRC, Hyundai’s i20 and Citroën’s DS3 was unveiled, complete with its launch livery.

The new 1.6-litre car, which will produce north of 300 bhp, will sport the latest technological advances in turbocharging and direct injection, with the chassis being moulded through the work that has been carried out so far. The re-entry into the WRC will be nearly two decades in the making, as TOYOTA took part in its last competitive rally back in 1999.

The new car has already been put through its paces over the past few months, with the Yaris WRC already tackling asphalt and gravel stages during the preliminary phase of development. However, with the program now fully confirmed by the parent company, they will begin to enlist the necessary staff to bolster the work that needs to be carried out to be on the pace.

This is also in preparation for future regulations that the FIA are planning to enforce, so that the team can adapt the new Yaris WRC accordingly, as well as getting performance, driveability and reliability to the best they can before going into battle.

In preparation of those that may be considered for a potential drive with TOYOTA in 2017, the Japanese manufacturer has now created its own development scheme, so as to help bring forward young rally stars of the future.

TOYOTA Hybrid Racing’s French race ace, Stéphane Sarrazin, who competed in the WRC with Subaru and won last year’s Tour de Corse, will also be on board to help develop the Yaris alongside countryman Eric Camilli and Sebastian Lindholm. Camilli is the first driver to be signed to the new young driver program.

The Yaris now follows the lineage that TMG has laid in the WRC, when company founder Ove Andersson put the foundations in place for Andersson Motorsport GmbH, which raced under TOYOTA Team Europe on the global rallying stage. Cars that have graced TMG’s ranks over the years include the Celica Twin-Cam, GT-Four and Corolla WRC, with the likes of Juha Kankunnen, Carlos Sainz and Didier Auriol fighting hard for victories and titles galore.

TMG President, Yoshiaki Kinoshita, explained that TOYOTA being asked to return to the World Rally Championship is “a great honour,” especially with the team already being fully commited to running this new program alongside the work that continues in the World Endurance Championship. The brand is already hard at work, busily preparing to defend their drivers’ and constructors’ titles, having won them fairly from Audi Sport.

“To run two works motorsport programmes simultaneously is of course a challenge but we believe we have the expertise and determination to succeed,” said Kinoshita, who said that there is a lot of work ahead, but the belief to succeed through expertise and determination is there in abundance. “To have received the support of TOYOTA Motor Corporation and our President Akio Toyoda is already very encouraging. We are looking forward to taking the next steps with an extensive development plan and a junior driver development programme. It is an exciting time and we are looking forward to this new challenge with great anticipation.”

This is the next progressive step for TMG, who are set to rejoin rallying this season with the debut of the GT86 CS-R3 customer rally car, as it will make its debut this coming July in Germany.

TOYOTA’s rivals may be working as hard as ever, but will the “new kid” that is coming to the party make an impact from the moment the lights go out for action? Hard work, perseverance and motivation will be just a handful of factors that will make the new car competitive from the onset…