As the Autosport International Show continues to kick off the motorsport season for 2014, we continue our Track Talk series with a real fan favourite, who competes in one of the most-recognized touring car series around, whose chariot “Sherman" returns to action this year. Rob Austin, who is sporting new livery for the upcoming 10-race weekend, returns under the Exocet Racing banner in the Audi A4 NGTC.

As the world of racing is as fast-paced as ever, Rob was kind enough to talk to us here about the new initiative that the team has recently been given approval for, as well as looking forward to 2014 after a very up-and-down season. Not forgetting as well, his involvement in Ron Howard’s “Rush,” which chronicles the intense rivalry between Niki Lauda and the late James Hunt up to the climatic end of the 1976 Formula 1 World Championship at a very sodden Fuji.

Nationwide Vehicle Contracts: Happy New Year, Rob. Congratulations on the new title sponsorship with Exocet, especially with the great livery that Jake ran at the BTCC Brands Hatch finale last year. It was a season with its fair share of ups and downs, especially with the brave overtake you did in Race 1, taking the lead, showing the pace of the A4. Now the focus is on 2014 after a difficult season. How are things coming along?

Rob Austin: And to you as well. Having Exocet on board from the very beginning, which is a two-year deal, is very good for us, and have been long-term sponsors along with Duo. They have supported us from day 1, and it is finally great to see them take a step up and be committed nice and early.

It’s the first time for us to be ready early, as well as the current rules remaining the same. Being rear-wheel drive is unique until this year, as well as being able to carry over our data from last year, which won’t sap our time and budget like in 2013.  We are going testing this time around, as we did no mileage on that front 12 months ago.

But what we did prove last year is that when we get it right, when I get it right, we clearly can fight out at the front. I think testing will also give us the ability to get it right more often.

NVC: With the Dunlop soft tyre now coming into its second year of use, as well as the Jack Sears Trophy being awarded for the most overtakes, it appears to give a new dimension to strategy on the grid for 2014, doesn’t it?

Rob: The Jack Sears Trophy is one great reward to have, and my mate Dan would have won it this ear. At the end of the day, it is all about going out there and doing your very best. Dunlop are changing the tyres slightly for this year, so we are looking forward to testing on those.

I’m hoping it will aid rear-wheel drive again, especially as its so frustrating when we are quick of the line but struggle later in the race.

NVC: Following the accident at Brands Hatch with Dave, it was just great to see how the fans came together and bought the “Save Sherman” T-shirts, which helped to put him back on the grid. What do the fans mean when it comes to the support you get?

Rob: The fans are incredible, as without their support we wouldn’t be here. It would have been a case of ending up going bust without them, genuinely. We owe them everything.

This year, we’ve spent a lot of hard work to get approval on a government-funded scheme, the “Enterprise Initiative Scheme,” which allows us to re-initiate the roof scheme we ran last year, which everyone loved last year and is truly about involving the fans.

Not only will £35 get your picture on the roof, but it also buys you shares in Rob Austin Racing. It gets better as you can claim 30% back through your tax, which works out to around a £27 investment, as well as being able to win some great prizes. The cool thing is that we will really be the people’s team.

NVC: And finally Rob, there was the role you had in “Rush” as Brett Lunger, driving the Surtees TS19 that your father owns. It has been entertaining seeing your face on the silver screen with Chris Hemsworth and Daniel Brühl. How did the involvement come about, and what was it like working with Ron Howard?

Rob: They needed the car to be honest. We got the meeting and were introduced,  then did some trial shooting which went really down with Ron, and off the back off that, we got the contract to build the Ferrari replicas. I pestered and pestered him and got him to give me my role with my one line as Brett. I was also doing a lot of the precision driving as well, as several drivers out on track.

It was really cool to be a part of something like that, as I’ve never had anything to do with movies before. It was very interesting and exciting. There is a rumour I’m also up for an Oscar, however I did start that to being with…

Rob: Thanks very much.

So with an innovative team scheme that truly breaks a new frontier in the racing world for the fans that follow Rob, you can find out more at www.robaustin.com to make sure you become a part of an exciting future for this close-knit team.

The team will also field another NGTC-spec A4, but as of yet the driver has yet to be announced, which will be revealed before the beginning of the season, which kicks off at Brands Hatch this coming March.

With testing a great way to start the season, it looks as though Exocet Racing is turning a corner, as Rob looks to build on the success that he has in 2013. He could look to win more than just his first race win at Rockingham and his pole position at Knockhill.

We would like to thank Rob for his time, and wish him and the team all the best of luck in 2014, so be sure to catch Nationwide Vehicle Contracts’ coverage of the upcoming season, which hits the track running this coming March at the Brands hatch Indy circuit.  (For more of our Track Talk series you can read more interviews in the series here) 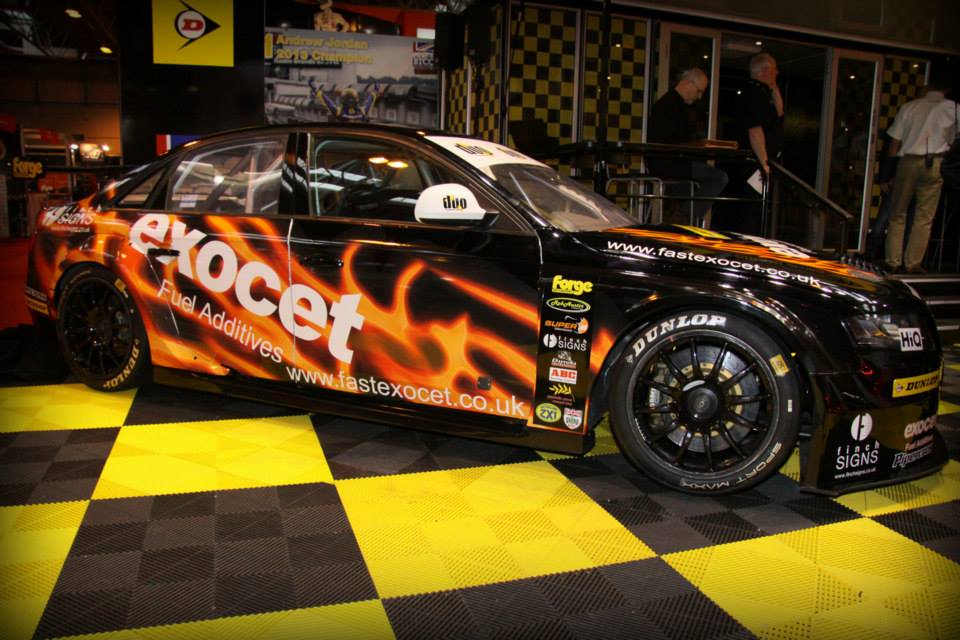 The new livery that one of the A4s will be sporting (Credit: Rob Austin Racing)