With the recent news that a former gamer turned professional racing driver, young sensation Jann Mardenborough has made his way to the big leagues of racing, as he will be driving for Arden in the GP3 Championship, one of the feeder series for Formula One.

This Cardiff driver, who won GT Academy Europe in 2011, has shown incredible talent, as well as consistent speed on track as a NISMO Athlete, is now the latest addition to the Infiniti Red Bull Racing driver program. This proves beyond a shadow of a doubt that going from virtual to reality is one of the ways that future talent will be discovered, as GT Academy co-creator Darren Cox took a chance on an idea that a lot of critics doubted from the onset.

However, after 5 years, the scheme is clearly working, with Jann’s recent announcement showing that it works and brings the best of the best to the fore. One individual, who is well-known in motorsport circles, is Simon Fitchett, who joined the GTA Global team in 2012 as their performance director. As a mind performance coach and personal trainer, he is helping to get the best out of those drivers that are involved in the program.

He has worked alongside some of the top-level drivers in the business, including David Coulthard, Sergio Perez and Jerome d'Ambrosio, and is further extending his reach to other sportspeople, alongside his role at GTA Global HQ, which is based at Silverstone.

Simon kindly took the time out of his busy schedule to talk to us here at Nationwide Vehicle Contracts about how he got involved, his work with the drivers, as well as the constant development of the scheme itself.

Nationwide Vehicle Contracts: Simon, thank you very much for talking to us here at NVC about what GT Academy can provide when it comes to the future of racing talent. First of all, how did you get to become involved with the program itself as Performance Director, especially as your reputation as a mind performance coach precedes you?

Simon: I was still working in Formula One at the time with Sergio Perez back in 2012, having been in the sport for the last six years. Being there for that amount of time was really enjoyable, but for me, it was a case of working with those that were really working hard towards a dream.

This was rather than working with drivers in Formula One that were already living their dream. For me, it was more satisfying to be part of a story with someone aiming for a goal and for their dream, as well as be able to help them along the way to go there.

I was always looking out for options, as once you’re in Formula One, it is very difficult to get out, as it does consume a lot of your life and your time. With the travelling and all the other aspects, it doesn’t give you a lot of time. I was looking over the last few years of my F1 career and I got involved with GT Academy during the summer shutdown whilst still working with Sergio.

I really enjoyed and started working with all the drivers then working with them on a mental and physical level on the “Race Camp” week, which is an intensive time for all of them. They are thrust into the spotlight from the world of gaming into extremely powerful cars, with huge amounts of pressure and expectations on their shoulders.

They have to perform that week, as cameras are watching their every move. It’s a bit like a Big Brother situation, so I was brought in during that week to help the guys to cope with the pressure, to be able to optimize the potential that they all clearly have to win the competition.

It went really well and I thoroughly enjoyed it, and then I was chatting with GTA Global from August until the end of the season. Sergio at the end of the year had his opportunity at McLaren, which was time for me to take stock of what I wanted to do. GTA Global offered me the chance to work with them as Performance Director, as well as a couple of offers coming my way.

One was in Formula One, as well as the chance to continue my work with Sergio, but McLaren tend to keep things in house, and still remain rather successful with that. It was really a perfect transition in my career, and I took up the position with GT Global.

NVC: With Jann’s move to the Infiniti Red Bull Racing Junior Program alongside fellow British racer Alex Lynn, it is a big step to take.  This shows just how NISMO and GT Academy has become a unique, but direct step for youngsters to have that opportunity to get into the program.

Did anyone expect this rate of progression or was it a case of NISMO being aware that the major breakthrough with one of their athletes making that big leap, having been technically fast tracked?

SF: Well, initially, GT Academy was born from the innovative mind of Darren Cox, who without his drive to actually make this become a reality, would never have happened. If you ever meet him, you can just feel the passion, energy and drive he has to not buck the trend, but as we tend to say, “change the game.”

He came up with this concept and was laughed at by a lot of people, but each year, they’re always looking to take it to the next level, and with what has happened with Jann shows that the system works. Jann, along with Lucas Ordonez, are products of this program, with Lucas having been on the podium at Le Mans three times already. He is very successful, and the graduates from last year that I’ve worked with, who won the Pro-Am Blancpain championship, it has all gone from strength to strength. 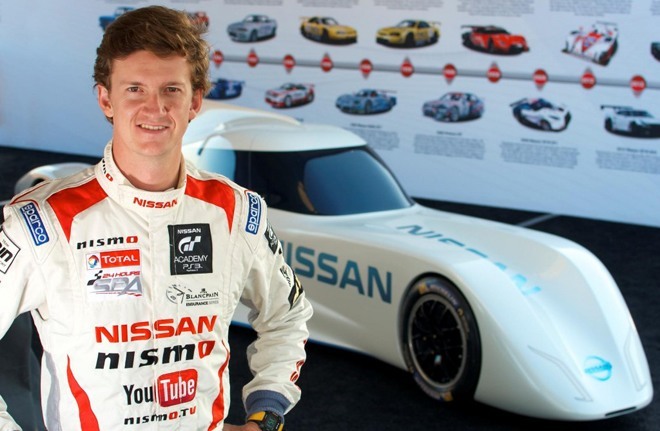 Bringing me on was another step to that they took to take the mental and physical training to another level, with being able to implement some of the training methods that I have been using, which worked very well with them. It helps to give the guys the best training possible, but not with just me, as we also have some great driver coaches and engineers at Team RJN.

Bob Neville, who is a very experienced professional himself, with a bunch of great guys that work well together to help these guys optimize their potential, owns the team itself.

NVC: Even with the fact that Jann, Lucas and Alex Buncombe have come through the academy, there is one tool that has been used which is the JukeRide, where through telemetry, video footage and heart monitors, drivers can be measured in how they anticipate certain situations.

In the NISMO TV video, where you describe how the JukeRide works, how is the development coming along for those that have graduated and are NISMO athletes, as well as those competing within GT Academy? How is that used on a continuous development basis?

SF: It is a great project, which is something that I wanted to introduce to Formula one, so we could actually have some kind of human telemetry to monitor the drivers physically and mentally whilst they are driving. So much effort is put into the cars, but I feel that that there was not enough effort put into the drivers themselves to help get the maximum out of the vehicles.

This was something I started working and it developed further and further, and we are constantly trying to improve it. It was a great tool that we put to good use during “Race Camp” last year in September, which the driver coaches used as well. We can all assess the drivers whilst they are out on track, and it also helps me to relate the drivers’ performance to their character types.

We also used it at Le Mans, which was very successful. It was very useful for Jann, Lucas and Michael Krumm, which enabled us to monitor their heart rates and see how focused and relaxed they were. It is something that we will see EEG implemented on in the future, as we have invested a lot in using the right guys to help us to be able to get that reading live on the computer screens for the action out on track.

It is a project that is ongoing, which is being developed all the time, as well as being a useful tool in the development of drivers in real-time, whilst out on track.

NVC: Simon, thank you for your time. All the very best of luck with GT Academy in the future over the coming months and years. We are all looking forward to what developments NISMO and GT Academy Global will have in store for the next crop of hopeful drivers that will one day make it onto racing tracks across the globe.

SF: No problem at all. Great to speak to you.

Simon is continuing to help develop new ways and techniques to ensure that GT Academy continues to pride itself on the success that its graduates have achieved in such a short amount of time, and with his help, that success is surely on the rise to what could be even better as the next-generation racers come flooding through the NISMO doors.

We would like to thank Simon for taking the time to talk to use here at NVC, as well as Alexandra Legouix of Monster Feet Media for getting us in touch with Simon himself. We look forward to seeing what new challenges GT Academy has in store for its next batch of young hopefuls, as well as what Simon has in store for them this year. (For more of our Track Talk series you can read more interviews in the series here)