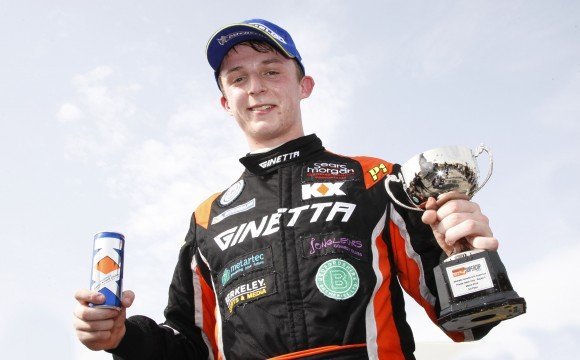 The TOCA support package has a variety of racing series that always provides great entertainment in support of the British Touring Car Championship, which includes the Ginetta GT4 SuperCup Championship.

One driver that was one of the title contenders last year was Hertfordshire’s David Pittard, who along with his racing career, is a qualified ARDS Instructor and a Pro Driver and Instructor for the Pure McLaren Experience. He has risen through the ranks of motorsport, as well as being one of the six drivers that was backed by the Tesco-ran KX Akademy last year.

The 23-year-old took time out during his busy schedule at the recent Autosport International Show to speak to us here at Nationwide Vehicle Contracts, and spoke about the season that was, his aspirations for the forthcoming season and much more.

Nationwide Vehicle Contracts: Firstly, David, a very Happy New Year to you. You had a bit of a fight on your hands with Charlie Robertson in the Ginetta GT4 SuperCup Championship last year, eventually finishing fourth overall in the drivers’ standings 84 points adrift.

Your performance in the latter half of the year was indicating your real pace as the finale loomed, so could you just give us an idea of how you were feeling going into the season and give us a brief overview of your season with KX by SV Racing.

David Pittard: It was this time last year that I was very confident going into the season, as I’d already tipped myself as a championship contender on the Autosport stage. It was on the public days when all the crowds were there, which means you also recognize faces in the fans, who are looking up to you, which is a very good thing.

Coming back to the season itself, at the start of the season we got only half a days’ worth of testing before the first race weekend, due to delays beyond our control.

In the situation that we were in, we were aiming to finish and rack up points in the first half of the season, then when there was experience gained by racing the car, as well as having the budget for more testing, we could then look to start winning some races.

The mindset going into Brands Hatch was good, which we bettered with a podium, getting second in race two. We were there in the right place at the right time, which was then capped off with a fourth place, which I was honestly disappointed with. This showed that even at the early part of the season, our expectations had already gone up.

Second round at Donington was a bit of a mix, as I didn’t really get on that well with the circuit and the car. I felt that I wasn’t driving as well as I could have done, but still managed to bring a podium finish, having been shoved off pole position on the final race of the weekend during the final lap.  But we salvaged something, which was a nice way to round off the weekend there.

I also managed to pull off what was voted the UK Motorsport Best Overtaking Manouver of the Year as per the recent Downforce Awards, which I’m proud to also mention.

NVC: Especially when you guys have got to commit to going for a pass, like the saying from the late Ayrton Senna: “If you don’t go for a gap, you’re no longer a racing driver,” which is even true in this day and age.

Even though series like the Ginetta championship is just so ultra competitive, you know when you’re on the pace, but also when you are clearly further adrift.

DP: This year is the most competitive that the championship has ever been, especially when you line up the caliber of drivers that are there, especially with pre-season being big news. It showed throughout the season, just how close it really was and that I’ve never pushed myself like that before. To have SV and KX behind me was just fantastic, as the rewards from that were nothing better.

NVC: Yes, as you also received the KX yellow jersey at the final round at Brands Hatch GP, which you decided to wear straight away at the final KX Question Time of the year, having just finished the race on the Saturday.

It’s good to see spur of the moment events just like that, which provides comedy moments, but also shows just how passionate everyone is that competes out on track, doesn’t it?

DP: That’s right, as I’ve been quoted this season several times, as being the “happiest driver out on the grid, but that shows that I don’t take anything for granted. As a team, both my dad and I have worked seriously hard to the opportunity that I have been given, and I’ve loved every minute of it so far.

That clearly showed through my pre and post-race gibbering interviews and the stuff I got up to off track, as I was just enjoying it all by living the dream and what I wanted to do.

NVC: Like at Brands Hatch, when the rear spoiler of your Ginetta ended up being a bespoke mantelpiece for the trophies you won that weekend. However, this year is now the prime focus. Are you still genuinely considering GT racing as the next step in your career?

DP: I’m not considering it as a definite, but in terms of a career path, it will be where I need to go. Going for touring cars is great in terms of profile, but you have to keep on trying to find sponsors, when you consider the likes of current BTCC champion Colin Turkington, Tom Ingram, Jason Plato and Rob Collard, amongst others, who haven’t really confirmed their plans for this year.

I’ve always enjoyed and looked ahead to my dream, which is winning at Le Mans, and that’s where I want to be. But in this current economic climate, that’s the best place to be at the moment, in GT racing that have the “gentleman” drivers that are still being paid by manufacturers to go out and race professionally, and that is the dream.

NVC: That is also very true of the move that Dino Zamparelli has made this weekend, returning to the TOCA support package in the Porsche Carrera Cup GB this season. Then you take a look at just who has graduated from that series: Nick Tandy, Romain Dumas and Timo Bernhard – now all works drivers for Porsche. Would that possibly be an avenue for you, if it came to making that decision?

DP: Probably. With the Pro Cup? Definitely, but it is still a case of getting that initial investment on board, which is so much more than what is needed to go for Ginettas. It’s a great championship in the UK, because it has made it accessible for the likes of myself.

Porsche is an internationally renowned championship, which is one to always certainly consider. So in an ideal world, that is a package that I would certainly consider. That is in terms of exposure and long-term opportunities, but only if I wasn’t in my current situation.

Even with his racing credentials, which includes winning the British Endurance Championship title in 2012, it shows that drivers like David, who is a BRDC Rising Star, have still to try their very best to fight to get to the grid, even before the lights go out.

David’s passion shows through his manner and the fact that he is doing what he loves, and has a right through how approachable he is and the results he delivers on track.

But as we all know, it is that time of year the fight is not just about being on the grid for the first race, waiting for the lights to go out, it’s the race to find the money and also get your place on the grid set in stone.

We would like to thank David for his time and wish him all the very best, as we look forward to hearing about his future plans on where he will be racing in 2015. (For more from our Track Talk series, you can read more interviews here.)