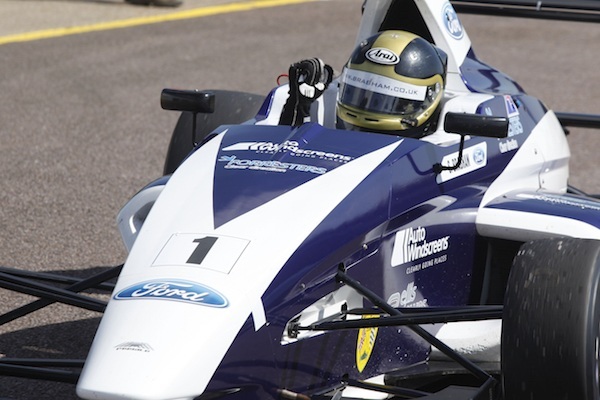 It doesn’t seem to matter these days when it comes to starting racing, whether it is age the age of four, or in your late teens, when that decision to get behind the wheel to race takes a hold.

That is clearly the case for Sam Brabham, who continues the legacy of the famed Brabham family, with his grandfather the late Sir jack Brabham, being a true trendsetter in the late 1960s.

Sam, like father David, started out late in his racing career, starting in karts at the age of 16 back in 2011, before entering the world of “slicks and wings” in 2013, by joining the JTR outfit for the past two seasons in Formula Ford.

This British/Australian racing driver took two wins last season in Formula Ford, winning both races at Thruxton, and was clearly a championship contender. This was before a huge setback in the form of both a hefty accident at Oulton Park plus budget restraints, caused this youngster to have to stop racing for the immediate future.

He is still focusing on a return to racing full-time, keeping his options open, but is in full support of the return of Brabham Racing, spearheaded by his father David. At the recent Autosport international Show, Sam took time out his packed schedule to talk to us here at Nationwide Vehicle Contracts to look back on last year, as well as the young talents that are flocking to the world of sportscars, rather than thinking just about Formula One and his relationship with his late grandfather.

You raced at JTR until your big crash at Oulton Park, which damaged the chassis and further budget issues ended your season rather abruptly. It’s very difficult when you have been working tirelessly to get back out on track this year, so how have things progressed for this year?

Sam Brabham: Last year was a big learning curve, going from the highest of highs to the lowest I’ve probably felt in my racing career than it would be possible. But in fact, Thruxton was incredible. I never thought that it would ever happen. When I first started karting, it was just a bit of fun to being with.

When I was then standing with a marshal at Top Gear Live, he asked me what I wanted to do, so I said I was just wanting a bit of fun. Honestly, I was never that quick in karting, because I didn’t think that it was going to happen.

But to see the progression from then until winning at Thruxton on a BTCC race weekend, with all these people watching was just fantastic. But to then have the shunt at Oulton, where the suspension broke, causing me to barrel-roll several times, the budget I had was taken up, so I couldn’t race.

So by not racing, it helped me to mature and understand that it is not the end of the world, if you’re not racing. Truthfully, I could have had the money to race in the final two rounds of Formula Ford due to the work I did over the summer, but I wasn’t really going to gain much from it.

I’ve proved in that class that I am fast, as well as capable of winning races. It was better to take the time out and rebuild for the following year, so to be able to come back stronger, which was the plan.

NVC: So in terms of championships that you are looking at, what is the best route that is being considered?

SB: LMP3 is still our main target. For me, I’m not closing the door on anything, because if someone came to me and said that they want me to race in FIA F3 Europe and that they would fund part of it, then I’d go race there.

I still want to be a Formula One world champion, but I’m still realistic to know that unless you have a lot of money, or are a part of a Red Bull or McLaren junior program, it is unlikely to happen. I’d rather branch off now to sportscars, earn my respect and earn money out of racing professionally, than going into GP2 and have nothing.

NVC: That is very true what you are saying there, especially with British drivers such as Oli Webb and Alex Brundle, as well as those coming from the ranks of GT Academy, like Jann Mardenborough. That’s another scheme that embraces “out of the box” thinking like Project Brabham does.

SB: They’ve shown that they can be very fast and it’s not easy to win a GP3 race, which Jann has done this past season. He’s shown that he is quick enough and that he can do the job, which shows that innovative ideas are really working.

This is the case with the Project Brabham scheme, which is a new way of thinking, which takes the normal racing model and changes it, so its open and transparent. It helps people to get involved and become a part of the team, whereas you normally see people wearing a team hat or t-shirt and see a car going round, and that is pretty much it.

Now, we’re giving people an opportunity to be a part of history, and be part of that new team.

NVC: Yes, even with you paying tribute to your late grandfather, the legend that is Sir Jack, when you had the livery on your JTR Formula Ford car this year. What does it mean to you to be a part of such a historic lineage in motorsport, where Jack was thinking outside the box from day one, which saw him be the man to truly revolutionize Formula One with a rear-engined race car, which showed in your dad’s thinking with Project Brabham?

SB: When dad told me about the project first of all, I didn’t really understand it. So I said to him that “Are you going to give data to other teams, then?” He said that it wasn’t going to be in those terms, and then explained it all.

I then read all the documents that he had and said that it was going to work. The normal racing model doesn’t work and you can’t currently make money out of motorsport as it is, and fans are not getting the involvement that they want, which is what we are trying to do.

It’s working, as we’ve already got 3,000 people signed up, and you can still sign up. Indiegogo have stayed with us, giving us the Forever Funding page, due to the project having done so well the first time, that they allowed us to keep it going, which is fantastic.

To get the fans involved, it just goes to show that motorsport wouldn’t even exist, if it weren’t for them. Motorsport would be nothing, if it wasn’t for loyal fans that wear the team kits at circuits across the globe, so we are engaging with the fans like no one else has done before.

Going back to what Granddad used to do, thinking in a different way, but who would have thought that putting the engine in the rear of a racecar was ever a good idea, which obviously worked.

NVC: Which is now the basis for every single seater category, because back in the day, all the racecars were front engine and could be a handful on the rear, especially with the cars being typical heavier at the front axle.

Nowadays, stability through centre of gravity shows through what you as a racing driver have to set up and feedback when it comes to performing at the limit of what a car is capable of.

SB: Having spoken to Jack a little bit, because he was over in Australia, I never really got to speak to him that often. He’d ring me when I was ready to go racing; when it came to my first proper big event out I track, which was on his birthday.

So I wished him many happy returns and asked him if he had any advice for me before going racing. “Just keep it on the black stuff!” he said, and even though I was a bit confused by what he said, as he has been a F1 world champion, he was right.  Especially if you stay off “the black stuff,” you’re not going to finish a race.

So in his day, that’s how you had to drive, because if you didn’t stay on the black stuff, you could have ended up dead. Fortunately, safety has moved on to a point where there was the odd accident that was terrible. In that era back then with Jackie Stewart, where people were dying at an alarming rate, he was another pioneer on safety in the sport.

NVC: Yes, as well as being involved in a serious accident himself, where he was trapped in the car.

SB: Jackie was very lucky to get out of the vehicle after the accident, as so many of their friends and fellow competitors hadn’t been that fortunate. For him to live through that era was impressive, let alone win three world titles, as I can’t imagine the risk that they had to take back then.

NVC: Must be a pretty proud feeling seeing the old footage of Sir Jack fighting out on track, as well as being part of this family, wouldn’t you say, Sam?

SB: Yes, but to me, he is just my granddad, but when I take a step back and look at what he achieved and how he did it, as well as what people have said about him, is just unbelievable.

I’m very privileged to be able to say that, and whenever I’ve been able to spend time with him, it was always special and I’ve always appreciated that. He was a man of very few words, but when he did speak, it really cut through and meant something, rather than babbling on about nothing.

The Brabham name is clearly alive and well, as Sam’s cousin Matthew is making a name for himself over in the USA and in Formula E, so and with David now heading back to Australia for the Bathurst 12 Hours with Flying B in early February, it shows just how much one iconic name can be that familiar to many.

We would like to thank Sam for his time, as well as Brabham’s PR manager, Emma Spearing for her help in arranging the interview, as we await what plans are in store for Sam for this season. (For more from our Track Talk series, you can read more interviews here.) 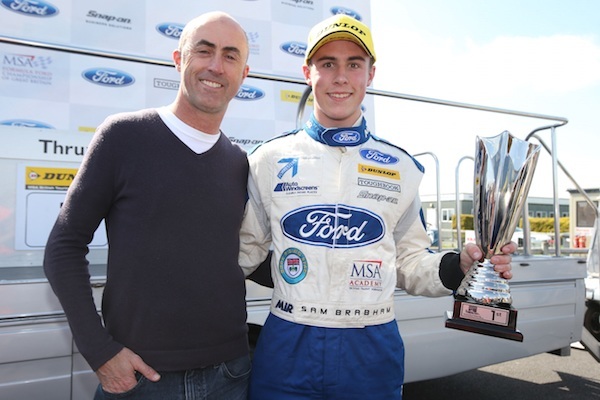