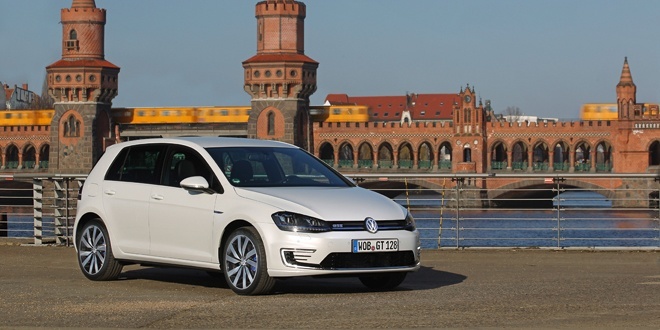 Having debuted at the Geneva Motor Show, it will be visitors to the Gadget Show Live at the NEC in Birmingham this week that will be the first in the UK to see the new Volkswagen Golf GTE plug-in hybrid.

The new car, that mixes GTI dynamics with the emissions and economy associated with an electric car, makes use of a combination of petrol and electric motors to produce not only 204 PS but also a theoretical range of 580 miles.

The two engines, a 1.4-litre 150 PS TSI direct-injection petrol engine and a 102 PS electric motor, besides production of that 204 PS power also generate torque of 350 Nm (258 lbs ft). By using both engines, acceleration from 0-62mph is achieved in just 7.6 seconds right on up to 138 mph; and incredibly it can reach 81mph when just using the electric motor on its own.

But then the provisional combined cycle figure of 188 mpg and CO2 emissions of 35 g/km stand out as exceptional. When it comes to pure electric mode, the range of the Golf GTE is 31 miles – activated at a mere press of a button – perfect for those city journeys and trips to zero-emission zones; all at a top speed as previously stated of 81mph. And the car also has an e-manager which allows the driver to preset vehicle charging, as well as interior cooling or heating, with all functions operated remotely using the Car-Net app on a smartphone.

The look of the Golf GTE is pretty much as you would expect from a Volkswagen combining elements from both the fully electric e-Golf and the Golf GTI, with C-shaped LED daytime running lights and aerodynamic horizontal ‘fins’. 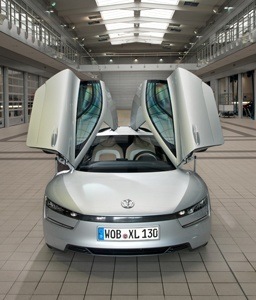 The Golf GTE Hybrid isn’t the only car on display at the Volkswagen stand in Birmingham, as over 200 exhibitors compete to show off the very latest tech that they convey. Sharing the stage with the GTE is the record-breaking 313 mpg XL1 super-efficient vehicle. Looking like a teardrop purely for look and aerodynamism, it has been said that the Volkswagen XL1 vision of what is possible in the future.

As the car enters limited production, the combination of a two-cylinder turbodiesel engine and electric motor help the car towards an unbelievable fuel efficiency figure of 313mpg – and the emissions figure is pretty impressive too at just 21 g/km – with the speed of the car helped by a bodywork and structure that is made up mainly of carbon fibre-reinforced polymer.

One thing that may look a little unusual to the casual observer is the lack of door mirrors; instead of these the Volkswagen XL1 uses wind-cheating pencil-thin cameras, and the doors to its two-seater cabin open upwards, like those of a supercar. 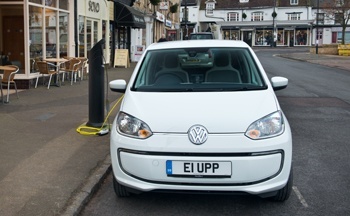 Finishing off the trio on display at The Gadget Show for Volkswagen is the fully electric e-up! which visitors to the stand will be able to take for an accompanied spin if they want to.

Continuing the electric theme, the e-up! is just as practical as other city cars that it is faced with, but Volkswagen’s electric wonder is smooth, silent and emission-free – as you would expect; and as many drivers of the car already know.

So if you are at The Gadget Show this week, why not pop over onto the Volkswagen stand?