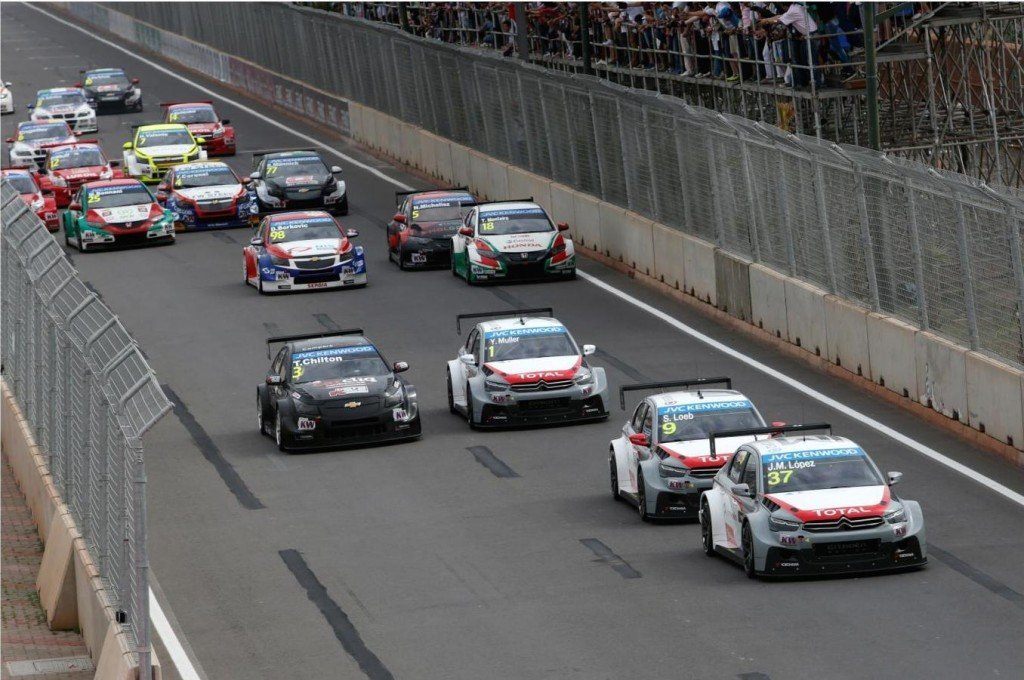 The 2014 season of the FIA World Touring Car Championship got underway this past weekend at the Circuit Moulay El Hassan, as the bright sunshine bathed the "Land of Kings" at the first race meeting for a championship that was entering a new era. New cars, new drivers and a new format would welcome those brave enough to take up the challenge.

The new TC1 category, which has the TC2 cars as a support class, sees more power, more aerodynamics and more performance, as the top tier will be several seconds faster and includes the new Honda Civic, Citroen C-Elysee and Chevrolet Cruze. The series also has welcomed the "new guy," as rally legend and 9-time WRC Champion, Sebastien Loeb, joins the new effort from Citroen Racing, who employed the services of reigning 4-time champion Yvan Muller and Jose-Maria Lopez to bolster what was a very strong team.

12 race weekends will see 24 races take place across the globe over many continents, with a new format also emerging for this brave new journey:

Q2  - 10 minute session, with top five going to Q3 shoot out. The top ten are then reversed for the starting grid for race two.

Q3 - The top five will battle for Pole Position in the one-lap shootout.

Sunday - Races will be from a standing start, rather than the rolling start in previous years. Both races will be up to 60km in length, and the customary morning warm-up is now removed from the schedule.

The fact that testing has been introduced to the series is to aid the TC1 entrants to develop the car in the inaugural season. 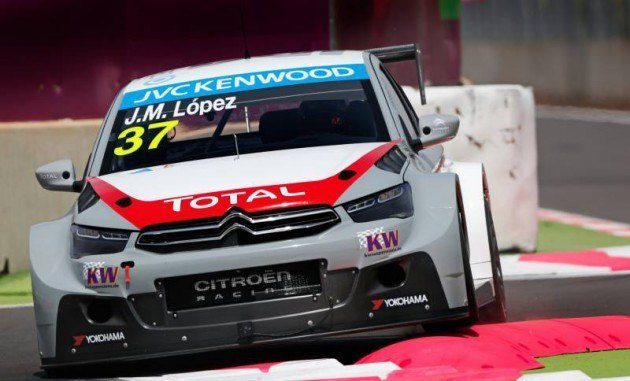 It was a literal whitewash for Citroen, as Jose-Maria Lopez took the first pole position after what was an easy time for the trio, as Honda and Chevrolet were on the back foot from the very beginning. Gabriele Tarquini was already out of the running, as his Civic TC1 was heavily damaged after an incident with fellow Italian driver Gianni Morbidelli, who t-boned his countryman's car rather hard during Free Practice 2.

The works Lada outfit had only one surviving car, as the Granta of veteran driver James Thompson made it through to Q2, with Mehdi Bennani being the best of the Honda drivers. Q1 was stopped abruptly by a red flag, as Petr Fulin clashed with the wall at Turn 11.

But it was in Q2 where the Citroen trio began to fly, as all three drivers were just spilt by a mere five thousands of a second, with Borkovic and Tom Chilton securing the final spots for the shoot-out.

Coronel took P10 in Q2, so would line up against good friend Bennani on the front row for Race 2. The cars would roll out one by one, as each of the drivers left would have just one chance to go for pole position.

Lopez scored the first points of the year, as Pole Position gives the fastest driver five points, as Loeb's lap faltered in the last sector. Muller was demoted to P4, having exceeded track limits, promoting ROAL's Tom Chilton to P3. Burkovic went early, so he was black flagged for not following the procedure for the new format. 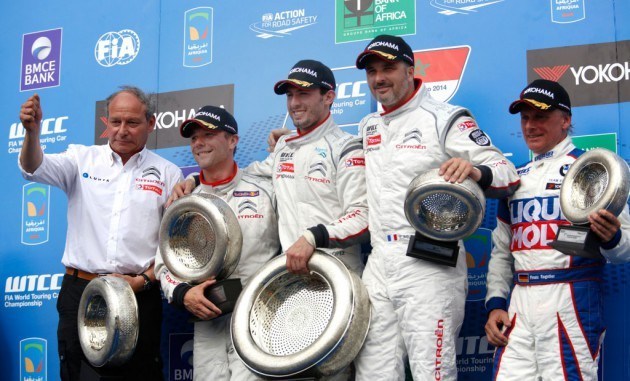 Citroen swept the board on their very first outing (Credit: Citroen Racing)

It would be a hot and demanding time for all the drivers, as track temperatures would hit over 35 degrees, but the clouds would keep direct sunlight at bay, but the heat and humidity would still climb as the adrenaline flowed from the first standing start ahead of 14 laps.

However, the first race was to see a clean sweep of the podium by Citroën Racing, as Argentina’s Jose-Maria Lopez kept the lead into turn 1 ahead ahead of Sebastian Loeb and Yvan Muller and never looked back. Tom Chilton was the man that lost out to a potential podium position to the four-time world champion on the very first corner, and finished highest of the other TC1 entries in his Chevrolet Cruze.

René Münnich jumped the start in sixth place and was subsequently penalized with a drive-through penalty, which was the first of four trips into the pitlane for the Münnich Motorsport team owner. His teammate Gianni Morbidelli made up some places, before suffering with a brake duct issue in the latter part of the race.

Mehdi Bennani, who switched to Honda for this season, lost the rear bumper on his Civic after Hugo Valente caused an accident on the final turn on the first lap, bringing out the yellow flag. Tiago Montiero suffered the same fate three laps later, as Campos Racing’s Dusan Borkovic tried to go for a gap on the inside that may not have been there.

Dutch race ace Coronel and 2012 WTCC Champion Rub Huff were both forced to retire due to a technical issue, as Coronel’s Chevrolet suffered damaged from the contact with Hugo Valente and also had a gear level failure.

Norbert Michelisz would also suffer a technical issue, slowing after going over one of the chicanes a bit too heavily, slowing and allowing both Bennani and Valente past. James Thompson would be the best of the Lada works team, finishing tenth, with the first Yokohama Trophy of the season going to long-time veteran, Franz Engstler.

The second race started in dramatic fashion into Turn 1, as contact between pole sitter Coronel and Bennani resulted in the Dutch driver’s Chevrolet Cruze being a shadow of its former self, hitting the wall of both sides of the track.

This was after a reshuffle of the initial grid, due to Rub Huff, James Thompson and Norbert Michelisz not making the grid for the start of the race. = Reigning champion Yvan Muller had nowhere to go and being another retirement due to extensive damage to the right front of his Citroen. Sebastian Loeb picked up his first win in the WTCC ahead of teammate Jose Maria Lopez, with Campos Racing’s Hugo Valente rounding out the podium.

The race was red flagged and suspended, due to the extensive debris clear-up following the collision on the first corner, as just 13 cars got underway in the second formation lap of the race, with Loeb getting away a bit on the slow side.

However the nine-time WRC Champion would be able to avoid the carnage, as the Frenchman ended up using the C-Elysee’s sheer brute speed to its advantage, passing first Montiero and then a slowing Bennani, who was deemed to have caused the accident involving himself, Coronel and Muller by the race stewards, was hit by a drive-through penalty.

The local hero was then a man on the move, as he returned back on track in eighth and used his local knowledge to get back up to fourth place, but was pipped by just 0.026 seconds to the finish line after a drag race with Tom Chilton, whose Cruze’s front splitter started falling apart.  Borkovic suffered his first retirement of the season, as he had to pull over his Cruze, as there was a definite technical problem with smoke filling the cabin.

So we saw a new era of touring car racing unveiled under the blue skies in Morocco, along with a new force that has dominated from the very start. We also have two different winners in a series that is in many respects, very different to what we had last year.

But after both races had run their course, Burkovic was given a ten-second penalty for his contact with Tiago Montiero in the first race, dropping the late Serbian to sixth place, whereas Benanni was firstly handed a three-place grid penalty for the first race this coming weekend. However, his weekend was to get worse, as the local hero was then promptly excluded from the second race, as his Proteam Civic TC1 was found to be underweight during an inspection.

However, there is still one big question - Will Citroen let their drivers race properly and will all hell brake loose as a result, or will someone else spoil the party?

The WTCC moves to the iconic Circuit Paul Ricard for next weekend's action, as we will see whether Tarquini will be back on the grid after such an early setbacks in his campaign, with Coronel returning in Hungary in the first weekend of March.