Sustainable, smart and stylish. The future of driving is here with our great range of Nissan Leaf lease deals, providing an all-electric road experience with a battery life of up to 168 miles. Benefit from low running costs, savings on maintenance and road tax, as well as a truly connected, intelligent city drive.

View our prices below and get an instant business or personal lease quote with many vehicles in stock for fast, free UK delivery (exclusions apply). 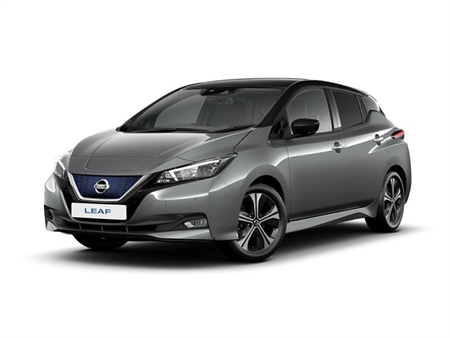 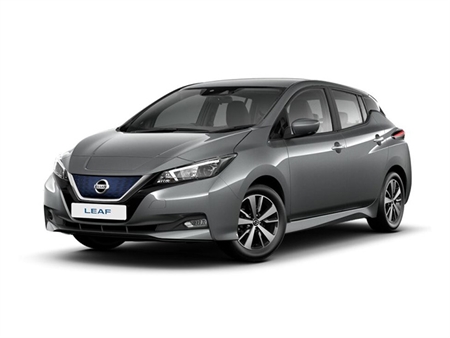 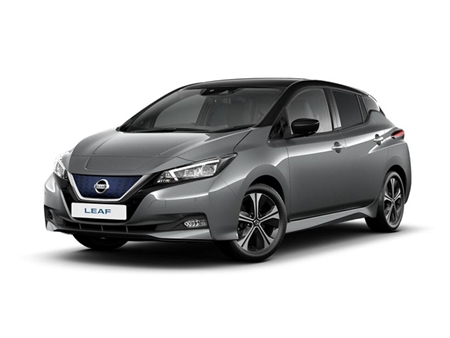 Why Lease The LEAF?

The Nissan Leaf is a pioneering electric car that has persuaded many drivers to ditch petrol and diesel models.

People who’ve leased the Leaf with Nationwide Vehicle Contracts give it a 4.2 star rating out of five with one Leaf owner describing it as a “really great car - probably under rated. It drives really well and has bags of power” and another stating “It is quiet, efficient, has plenty of acceleration when needed. The range has not been an issue. I’ve found many places to get a free charge whilst having a coffee if needed. Has all the bells and whistles. A great car.”

The 2018 launched second-generation Leaf took the original car’s skeleton and clothed it in a new body. This was more conventionally styled and gave the Leaf scaled up Micra-like looks. Its batteries are more powerful, and its interior design is also more mainstream than before.

Some drivers of the early second-generation Leaf found that on long journeys, the software designed to keep its air-cooled battery cool would sometimes prevent the car from fully charging, but buyers can now opt for versions with a bigger battery which gets around this issue.

For those wanting to know how long do Nissan Leaf’s batteries last, two battery sizes are offered. A 40 kilowatt with a potential range of up to 160 miles and a 62 kilowatt version that will take you up to nearly 240 miles. The 40-kw car is more suitable for short runs or urban driving.

It’s worth remembering that cold weather will reduce range, and driving the car at speed will eat into the miles it can cover, but many electric car owners have adapted their driving styles to make their vehicles go further. Every time a Leaf driver releases the accelerator, the car charges its battery, and this can actually increase range.

Charging times vary from about six and a half hours for a home wall unit to around 40 minutes for a fast charger to replenish the battery up to 80 per cent. Again, these are ballpark figures as things such as battery and outside temperature impact on how long charges take.

The seats are soft and comfortable, and there’s room for five in the car’s well made, conventional looking cabin, which has reasonable storage space. Large door apertures make getting into the Leaf straightforward.

With the back seats raised the boot is a decent size. It’s also deep so there’s quite a high loading lip. The back seats fold forward but don’t tip up, so don’t expect uninterrupted luggage space or a flat floor. In fact, the luggage area is quite cluttered. 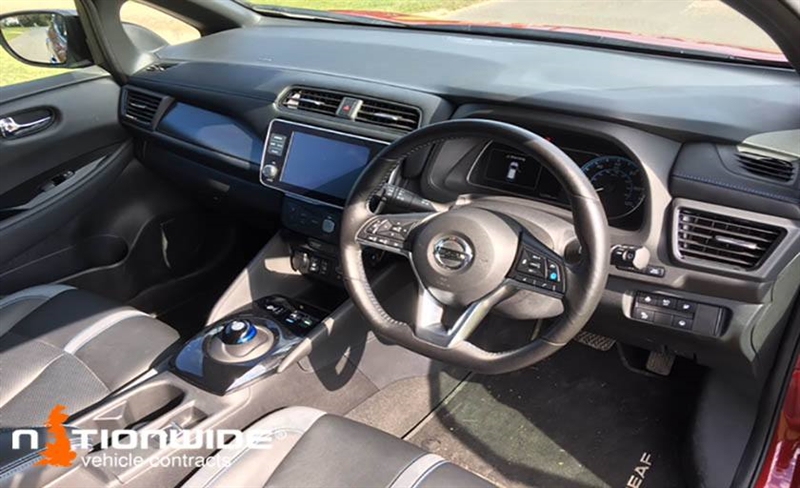 The rear will take three adults, and there’s a decent amount of head and leg room. The front is commodious too.

On many levels the Leaf feels like a regular car, which is a compliment. It’s a very civilised way to get about and its mix of extreme quietness and instant acceleration is quite addictive, but it’s also very user friendly, although one niggle is that the steering wheel can only be adjusted for height, not reach. However, controls, including the touch screen, are intuitive and straightforward to use, and the car has the connectivity features many drivers demand.

The Leaf is a very relaxing car to drive. Take your foot off the accelerator and the motor does much of the braking, especially in e-pedal mode, which strongly decelerates the car to recoup more energy and even applies the brakes as it comes to a stop. A driver who tunes into this rarely has to brake. 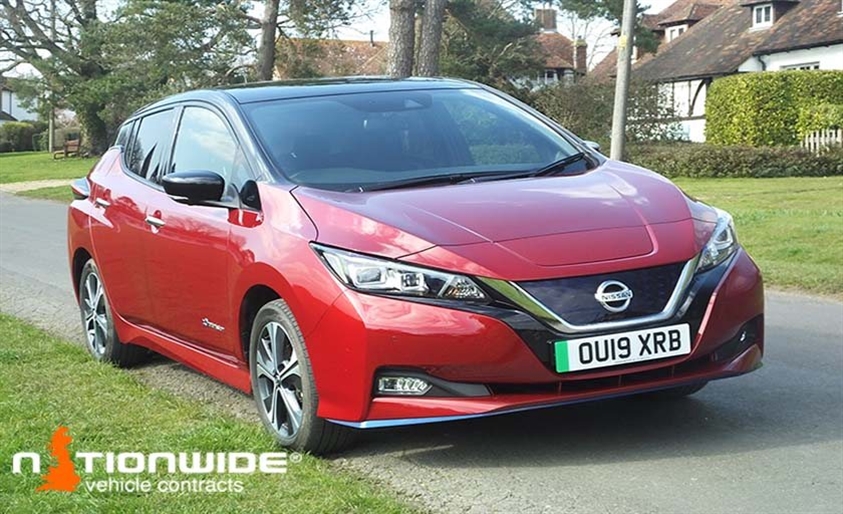 Top speed is just under 100mph and 0-62 fractionally less than 7 seconds, so the Leaf is quick off the mark. Acceleration is instant, smooth and almost silent. The car handles well, cornering flatly and accurately, aided by quick is slightly numb steering. The ride is mostly comfortable and the suspension is well controlled, but the Leaf can get a bit jiggly on poor surfaces.
The Nissan Leaf is extremely quiet, its motor making a distant whining noise when accelerating. Wind and tyre roar are quite muted, and the interior of our test car was entirely rattle free.
The Tekna version we drove is one of five trim model variations. It features Nissan’s semi-autonomous ProPilot radar system that can keep the car in lane and at a regular distance from other vehicles and help it park. The car is well equipped with passive and active safety aids, and useful features like this reversing camera with 360 degree view.

Getting used to the Nissan Leaf’s lower mileage range and charging requirements takes a fair degree of compromise, and Britain’s charger network is still being rolled out, but over 500,000 Leafs have been sold so far, making it the world’s most successful electric car, and many owners wouldn’t drive anything else.

View our latest lease deals on the Nissan Leaf. 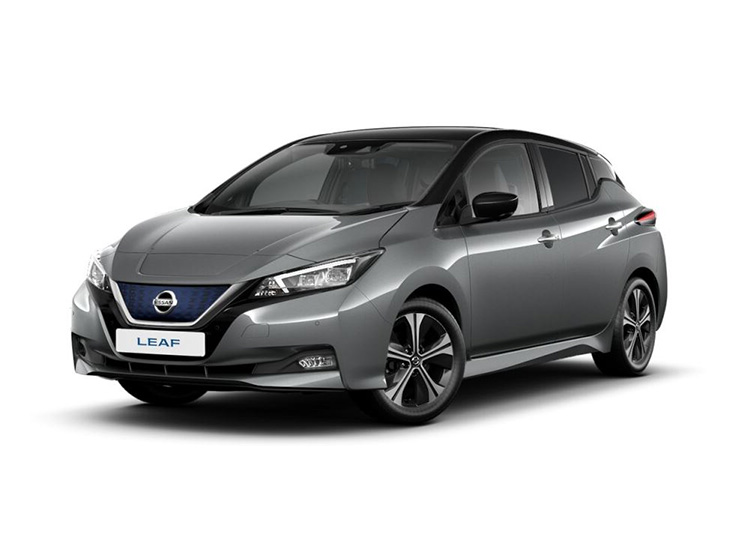 The awful customer service from RCI and Nationwide leasing. No responses after months of trying.

Nothing significant to say. It is one of the original EV and clearly now a little dated and bettered by newer models in the market place.