Reviews of the Nissan X-Trail

Why Lease The X-Trail?

The original Nissan X-Trail went on sale in 2001, with its successor arriving in 2007. The third-generation Nissan X-Trail shown here, was first seen in September 2013 and it went on sale in the UK the following summer. As a result this is a car that's getting on, and most of its full-sized SUV rivals are significantly newer. Those alternatives include the Peugeot 5008, Kia Sorento, Hyundai Santa Fe, Skoda Kodiaq, SEAT Tarraco and Honda CR-V.

Is the Nissan X-Trail a good car?

Nissan has given the X-Trail a regular nip and tuck to keep it competitive in terms of equipment levels, while it still looks smart. So it's no wonder owners seem to like their X-Trails, as within the Nationwide Vehicle Contracts owner review section they give the smart-looking SUV an average score of 4.3 out of five, with comments such as:

Is the Nissan X-Trail a seven-seater? Well, it can be. While five seats are standard across the range, for an extra cost you can get an extra pair of pop-up seats in the boot - something well worth specifying even if you need them only occasionally.

The middle row of seats slides back and forth so you can choose the optimum amount of legroom for rows two and three, although that third set of seats is claustrophobic for adults. But with an adjustable back rest, a 60/40 split-folding facility, and the option to fold the second and third rows completely flat, the X-Trail is a very practical car as you would expect.

The X-Trail is also great for carrying stuff. With all seven seats in use the boot can stow just 135 litres, but if you drop those seats down this jumps to 445 litres, and with the middle row folded flat too you've got a massive 1996 litres at your disposal, which puts the X-Trail among the class best.

Incidentally, one thing that many of the X-Trail's rivals don't come with, is a spare wheel, but the Nissan gets one as standard throughout the range.

Nissan plays the value card very heavily with the X-Trail, so the interior is crammed with equipment. However, while large touch-screen displays have started to become the norm within this segment, the X-Trail's age shows with its dashboard that's well stocked with buttons to control everything. To many drivers that's a good thing; the dash is busy but it's generally intuitive, although some of the switchgear is positioned rather haphazardly. 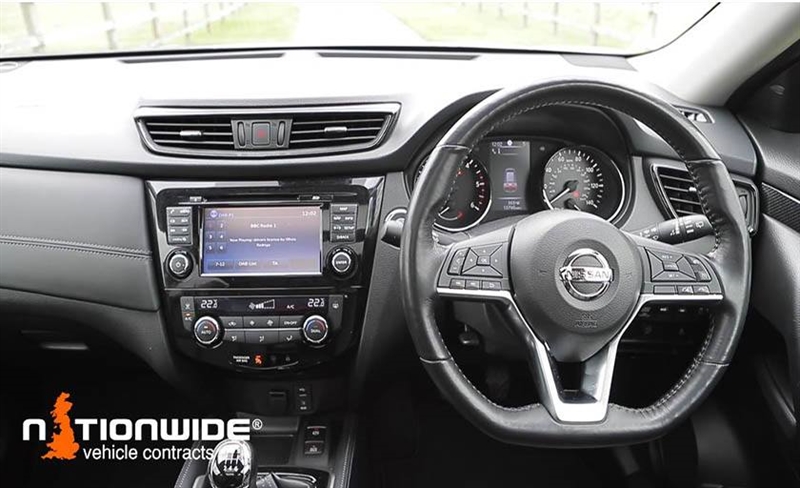 There are plenty of cubby holes for oddments with a decent glovebox, plenty of cupholders, a decently sized box in the centre console, plus plenty of storage space in each of the door bins. The multimedia system works well enough and it's user-friendly, but the display is quite small and some of the graphics are dated compared with rivals.

All X-Trails come with height adjustment for the driver's seat along with reach and rake adjustment for the steering wheel, so it should be easy to get comfortable, unless you're especially short or tall. All-round visibility is on a par with most modern cars, which all feature thick pillars for crash protection, but one thing that the X-Trail can beat some of its rivals on is the sizeable door mirrors which give an excellent view of the road behind.

Even better, if you're parking up you can make use of the around-view feature that's standard on the Acenta Premium, which sits just above the entry-level Visia. This also brings navigation, while the range-topping Tekna comes with a full suite of driver assistance features such as blind spot warning and self parking, along with heating not just for the front seats, but also for the middle row too.

As a full-sized SUV the X-Trail is big and heavy, but on the road it disguises its bulk better than you might expect. There's a choice of a 1.3-litre petrol engine or a 1.7-litre diesel. Both are turbocharged, but whereas the diesel is available with either manual or automatic gearboxes, the petrol comes only in automatic form. That transmission is a dual-clutch system though which means it's slick and efficient, but the diesel definitely offers the best balance of muscle and economy. 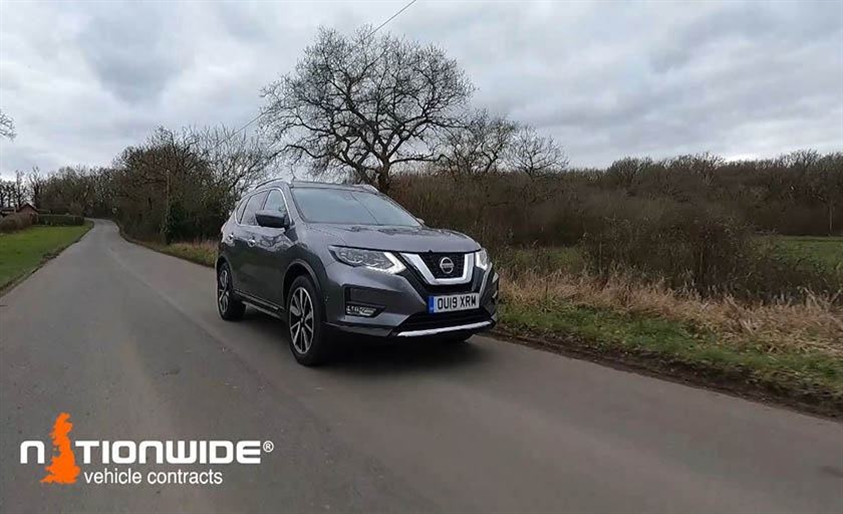 The relatively small diesel engine offers better performance than you might expect, and while it's no road rocket this unit has plenty of power for long-distance motorway drives. Many X-Trail models come only with front-wheel drive but there are four-wheel drive options too. Known as intelligent four-wheel drive, this set-up gives you the best of all worlds in that only the front wheels are driven until they start to lose grip, then the power is also sent to the rear wheels in the blink of an eye, to keep you moving. This helps to cut fuel consumption while also improving safety.

The X-Trail is starting to show its age, but don't be too quick to write it off as there's still plenty to like about it. For starters it's well equipped, with all X-Trails featuring alloy wheels, air-con, cruise control and a DAB radio. The X-Trail’s cabin is also versatile and spacious, plus it's made to a high standard, even if the dashboard isn't especially modern.

So should you lease one? In isolation the Nissan X-Trail is a good bet, but you should consider some of those newer options too. However, when you look at what you get for your money the Nissan is quite a compelling package on a per-pound basis. 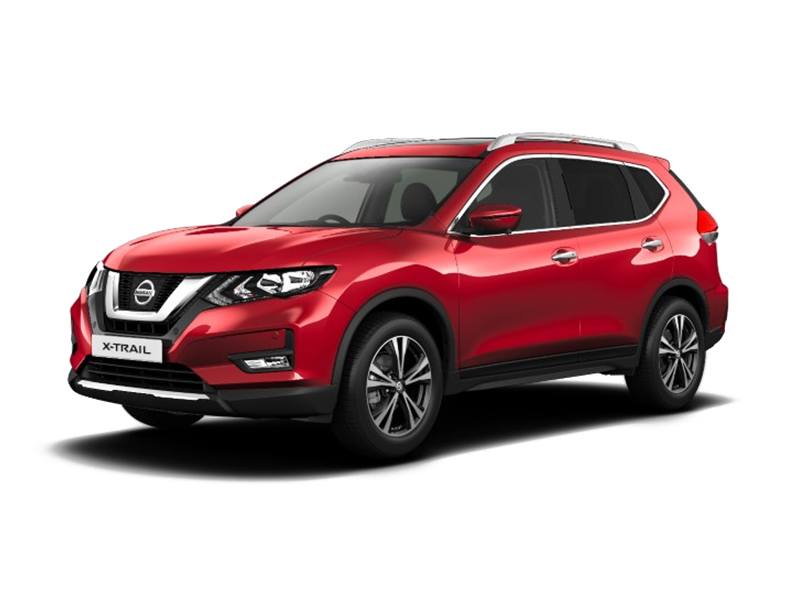 Love this car and the whole process has been so easy. Any time we have had to ring to book in for a service or new tyres etc everything has been dealt with quickly and efficiently. No complain from us .

Very practical, good in town and on motorways. Not too good at quick acceleration ie out of a junction into fast traffic.

The car had to go into the dealership some time ago now as there was a problem with oil saturation, which is a big job to sort, we were told that this is because the vehicle wasn't doing long journeys or being driven at speed... Both untrue but difficult to prove and also a touch alarming our previous KIa did exactly the same journeys and speeds and it never caused a problem The garage eventually decided that they would not charge for the repair, all confidence i the vehicle has gone and if it could back tomorrow then it would. Its very underpowered , the electronics .are over sensitive and it just not a nice vehicle to use. Bet you wish you hadnt asked now.

The drive is not great - it is a bit like driving a tractor and although it has the room I need for teh kids it isn't very comfortable. It also absolutely guzzles diesel.

Itâ€™s got what it needs

Rear seats have no leg room - my five year old doesnâ€™t fit. Middle seat in the middle row also too small for an adult. Great car to drive, but not if you have a finally of five plus.

Due to the current covis19 crises driving the car is very restricted but comment as follows. I find the driving position hard to get into a comfortable position so that my legs are close to the control pedals.

Would go for 4wheel drive in future due to wheel spin. Design fault on front wipers as canâ€™t lift them off screen to clean. Otherwise totally happy with car.

Excellent car. Boot is smaller than imagined but only a minor issue.

The car is great and works for my needs. It was better value to lease it. So for what I needed it for it was better.

Fuel economy is poor, had dealer issues when engine light came on dash dealer not interested. RAC called out once in first 3 months.