The new Renault Clio was launched in 2019 and is Renault's fifth-generation version of the popular supermini that was originally launched in 1990. With a much-improved interior over its predecessor, the Clio is considered one of the best small hatchbacks with a refined drive, spacious cabin and updated infotainment system.

Equipment grades carry over with the Play, Iconic and S edition and in our opinion, the best value is the sporty RS Line Bose Edition. For the latest Clio lease prices, view our personal leasing offers below. All vehicles are supplied by the Renault franchised dealer network and include free mainland GB delivery (exclusions apply).

Why Lease The Clio?

The new Renault Clio is a 5-door supermini that’s been one of the best-selling cars in Europe since its original 1990 launch. It’s the only car to have been awarded the European Car of the Year on two separate occasions (1991 and 2006). Its solid performance, excellent economy and extensive range of advanced interior features make it the perfect embodiment of that famous Va Va Voom spirit. Now in its fourth generation, the consensus is that the new Renault Clio is better than ever.

• Fourth generation of one of Europe’s consistently best-selling cars; 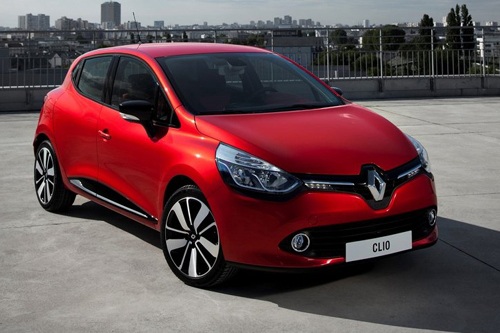 • Twice winner of European Car of the Year awards;
• Up to 88.3mpg with CO2 emissions as low as 83g/km;
• Touchscreen R-Link infotainment system;
• Choice of advanced and efficient petrol and diesel engines

What is Va Va Voom? It’s one of those expressions for which there’s no literal translation or explanation, but it could be understood as referring to an unprecedented combination of revolutionary efficiency and pure, unadulterated driving pleasure. If that’s the case, the Renault Clio has Va Va Voom in spades.

There are multiple engine configurations from which to choose, with ample choice for both diesel and petrol lovers. The pick of the petrol bunch, though, is the Energy TCe 90 engine. The first car to feature this engine, the Renault Clio is capable of 62.7mpg, with CO2 emissions at just 104g/km when fitted with this 3-cylinder, 900 cc turbo petrol engine. It also enjoys 90 horsepower (hp) – just right for sprightly urban motoring!

But for the best Renault Clio driving experience, look no further than the Energy dCi 90 diesel engine. It draws from such advanced systems as Stop & Start, Energy Smart Management (ESM), Thermomanagement and active air shutters to make for truly remarkable efficiency figures - with 88.3mpg and CO2 emissions as low as 83g/km.

The Renault R-Link gives you full and complete control not just of your Clio’s infotainment features, but also of your life outside of the car. Think of it as a dashboard mounted tablet through which you can access your music, messages and even internet applications using a combination of a touchscreen interface, steering wheel controls and intuitive voice recognition technology.

Through the R-Link store you can download such applications as social networks, weather reports, email and route navigation. There’s also an Eco Tips function that gives you a journey summary; offering tips on how you might alter your driving style to reduce fuel consumption and running costs.

Thanks to the R-Link, the Renault Clio is truly a car you can make your own.

When you lease a Renault Clio from Nationwide Vehicle Contracts, you can enjoy such additional benefits as fixed monthly payments, a lower initial deposit, flexible contract duration and mileage terms and inclusive road tax and breakdown recovery.

First time with a Renault. Doesn't feel particularly solid, poor performance and insurance could be cheaper.