Going to watch live sports is an experience like no other, and many travel far and wide just to see their favourite team play in front of their eyes. The one problem? It can often be very expensive - or difficult - to find somewhere to park once you arrive at the venue. While we can ensure the cost of leasing a car will always be competitive, we can’t always promise the same for parking. 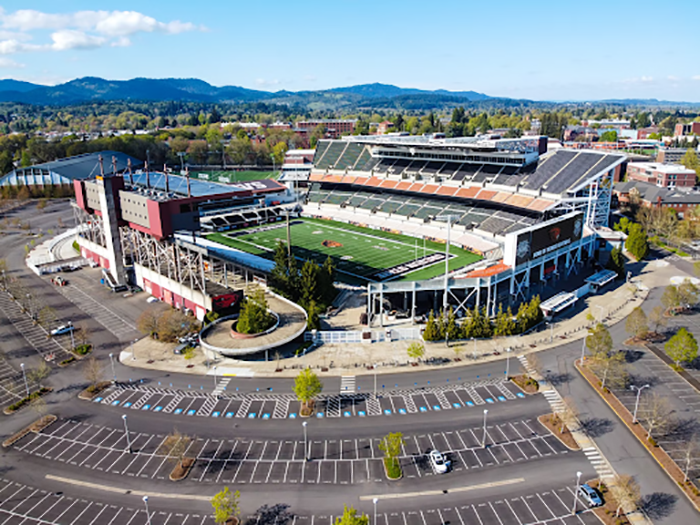 Once you’ve driven to the game, as around half of fans do according to Better Transport[1], the official car parks can run you up a substantial cost. So, we’ve looked into which stadium’s parking is the most and least expensive, helping you never be caught out by extortionate parking fees at the next match.

To do this, we looked into the stadiums of the 2021/22 Premier League and Championship teams, and analysed any official and unofficial parking options for visiting fans. We also looked across the pond at the parking for the US stadiums used by the NFC and AFC teams in the NFL. As a result, we can now reveal which stadiums offer fans the most and least affordable parking spots on matchday.

To find the most and least expensive parking in UK football stadiums, we analysed each team’s website to discover the recommended parking options suggested. While some stadiums may not have their own designated parking, they often have relationships with nearby car parks, offering these to visitors instead. Some, mainly in London, did not advise travelling in a car, and instead encouraged the use of public transport.

To find unofficial car park costs, we used the community driven source Footy Parking to find parking options within a mile of the stadium. We then averaged the costs of the official and unofficial parking to discover which stadiums offer the most and least expensive parking, so you’re prepared on your next matchday.

The most expensive Premier League stadium when it comes to parking options is the Falmer Stadium (otherwise known as the American Express Community (Amex) Stadium) in Brighton. The stadium is the home of Brighton & Hove Albion, but it’s also home to some expensive parking. On average, fans driving to the stadium can expect to spend £15 on matchday parking, using the two nearby unofficial car parks advised by the stadium. It’s also worth noting that you have to book your space in advance - don’t be caught out!

On the other end of the spectrum is Selhurst Park, home to Crystal Palace. There’s no stadium parking available at this venue, so the official travel guide advises finding on-street parking nearby. Make sure you leave yourself plenty of time when parking up here, as many street parking spots are subject to time restrictions or permit-only requirements. If you’re lucky enough to nab yourself a spot, you can expect to pay an average of £3.67 on matchday.

The most expensive Championship stadium parking

When it comes to Championship team stadiums, a visit to Deepdale Stadium, home of Preston North End, is the most expensive to park at. Stadium parking here will cost £15, but you can save a lot of money by parking off site in the unofficial car parks surrounding the area, which will cost an average of £3.41. So, when the two costs are averaged out, parking at this stadium will run fans up around £9.21.
The cheapest Championship stadium to park at is Kenilworth Road, home to Luton Town. There’s no official stadium parking here, but nearby car parks are advised on the website. One of them, Power Court A, offers free or heavily discounted parking to Luton Town supporters depending on whether it’s a weekday or weekend match. Provided you have the appropriate permit, you can park here for free during ‘midweek fixtures’, or for just £1.40 for ‘weekend fixtures’.

Using the Team Marketing 2021 NFL Fan Cost Index[2], we discovered the average cost of parking at each stadium used by NFL teams. This index found these costs with telephone calls with representatives of the teams, venues and concessionaires, asking identical questions in all interviews to make sure the numbers are fair.
To reveal the unofficial car parks, we used SpotHero to find any car parks within a one mile radius of the stadium usable on matchdays. We then averaged together the official and unofficial costs to discover which stadiums offer the most and least expensive parking to visiting fans.

The most expensive NFC stadium parking

The SoFi Stadium, home of the Los Angeles Rams, is the NFC stadium that will cost fans the most to park at. The official parking for this stadium costs $66.03 (£48.91), making it the most expensive place to park by far. The unofficial parking is even more expensive, running you up an average of $89.25 (£66.11). This means the overall average cost of parking here ($77.64, or £57.50) is nearly 4x as much as the most expensive stadium parking in the UK.

If affordable parking is a deal breaker for going to watch a NFC game, then the State Farm Stadium should be your next trip. Home of the Arizona Cardinals, the official parking at this stadium costs an average of $12.22 (£9.05). If you venture offsite to the one unofficial car park within a mile radius of the stadium, you can save even more, costing $10 (£7.40) on average.

The most expensive AFC stadium parking

The SoFi Stadium is also the most expensive AFC stadium, since it’s also home to the Los Angeles Chargers. However, this isn’t the only expensive stadium to park at in the AFC - in second place is the Allegiant Stadium. This stadium is the home ground of the Las Vegas Raiders, and official parking here will cost fans an average of $40.70 (£30.13). It’s no cheaper to go offsite, though, as the average cost of the 30 car parks within a one mile radius of the stadium is $43.40 (£32.20).

Providing much more affordable parking to AFC fans is the Paul Brown Stadium, home of the Cincinnati Bengals. Official parking here costs an average of $11.60 (£8.59), and the eight car parks located within a mile of the stadium cost an average of $14.16 (£10.49). As a result, fans visiting this stadium on matchday will have much more left to spend on halftime snacks than LA Chargers fans.

Tips for travelling to and from sports events

While the excitement of an upcoming game can take over your mind, it’s also important to think about your travel arrangements ahead of time to make sure you get there and back smoothly and safely.

If you’re driving, make sure you check what parking is available and book a spot if necessary. You could also car share with fellow fans to reduce the traffic around the stadium, as well as create an exciting atmosphere in the car on the way to the game (and hopefully on the way back, too). Also, be aware of unofficial parking scams, and make sure that any transactions you make for parking are legitimate and protected.

We’d always recommend arriving early, giving you plenty of time to get parked up, find your seats, and get some much needed refreshments. If you’re the designated driver, though, make sure these refreshments are of the purely non-alcoholic nature. We’d also recommend bringing along a portable charger for your phone, especially if you’ve never travelled to that particular stadium before, so that you’re not trapped at the end of the game with no directions home.

As you should always do, drive carefully and sensibly on the way there and back, even if your team has just played the best game of their lives. Follow the speed limits and rules of the road at all times - there will be plenty of opportunity when you get home for more extravagant celebrations.

If you have your eyes on an upcoming game that you want to drive to, but don’t yet have a car to get there in, we have some great car leasing deals available on all types of models. Travel to support your team in style with Nationwide Vehicle Contracts.

To find the official rates of parking, Nationwide Vehicle Contracts analysed the matchday parking advice and costs available on all 44 Championship and Premier League teams’ websites from the 2021/22 season. To reveal the unofficial costs of each stadium, the community-driven source Footyparking.com was used to discover the car parking options and costs within a 1-mile radius on a matchday. The official and unofficial costs were then used to calculate the average parking price for each stadium.

For the NFC and AFC, Nationwide Vehicle Contracts used Team Marketing 2021 NFL Fan Cost Index report to discover the average parking cost at each teams’ stadium. These costs were determined by telephone calls with representatives of the teams, venues and concessionaires. Identical questions were asked in all interviews. For the unofficial car parks, parking site Spothero.com was used to reveal the unofficial car parking options within a 1-mile radius on a matchday or event day. The official and unofficial costs were then used to calculate the average parking price for each stadium.

USD to GBP exchange rates are accurate as of 20 January 2021.