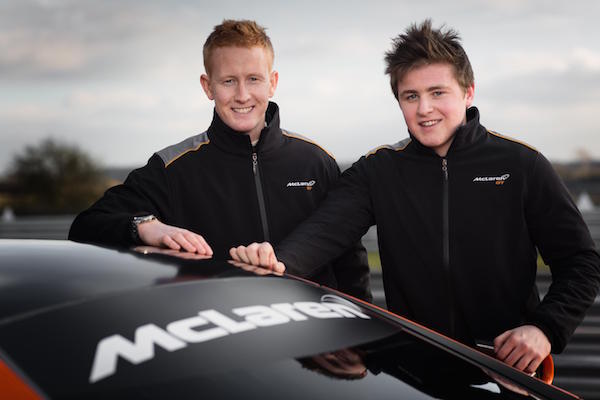 With the recent announcement that young racers Ross Wylie and Andrew Watson were the first drivers to be signed up to the new McLaren GT Young Driver Programme, these two promising talents will now be partnering up for the 2015 Avon Tyres British GT Championship.

Wylie and Watson will be driving for the Von Ryan Racing outfit, who have been working hard alongside the Woking manufacturer since the beginning of their mutual partnership back in 2011. It has been an intensive time developing the new 650S GT3, which now takes over the mantle from the MP4-12C GT3 after three seasons.

The new car made its competitive debut in the Gulf 12 Hours at the tail end of last season, which was the final stage in the development program, which the young duo are looking to build on, as it will be their first campaign in the top-flight level of GT racing in an ultra-competitive championship.

Von Ryan Racing will be fielding two 650S GT3s for this year’s championship, which kicks off at Oulton Park over the Easter Bank Holiday weekend. The second car will be driven by the pairing of BRDC member Euan Hankey, who is a product of the Formula BMW and Porsche Carrera Cup scholarship programmes, alongside Turkish driver Salih Yoluc, who will also make his GT3 debut alongside Watson and Wylie.

Von Ryan Racing, who made selected appearances in the British GT Championship last year, will be making a full-blown return to the championship, having built a professional reputation as a respected team in racing.

Team Manager Dave Ryan has been impressed with how both Wylie and Watson have conducted themselves, as well as the potential of the new car itself: “I have been very pleased with the rate of progress by Andrew and Ross, and they have both come on as drivers so much already through working closely with my team. We are confident they are a strong pairing to contest the British GT Championship, and we are looking forward to working with them this season. It is also a true test of the new McLaren 650S GT3, which has shown some real potential in testing.”

McLaren GT’s Managing Director, Andrew Kirkaldy, has also been keeping a close eye on the two youngsters that are the first to be signed to the Young Driver Programme, as well as what this means to the efforts that have been put towards the forthcoming racing campaign for the pair.

“Andrew and Ross have shown themselves to be extremely professional and motivated since joining the McLaren GT Young Driver Programme. The British GT championship has earned a reputation as one of the most competitive national GT series in Europe, and it will be a steep learning curve for them both, but I am confident that they will be a formidable pairing from the first outing in a couple of weeks,” explained Kirkaldy. “They will be working closely with [factory driver] Rob Bell throughout the season, and have access to extensive motorsport knowledge and expertise throughout the Von Ryan Racing team, not least from Dave Ryan, so they will learn a lot just from being around such a professional outfit.”

With just under a month to prepare for the first round of the championship, which has brands including Ginetta, Aston Martin, Ferrari and Nissan competing for top honours, as well as glory-hungry drivers, Ross and Andrew have to make sure that they are fighting at the sharp end.

This will show just how high-calibre they are, and will be a big stepping stone to greater things in the future.  This explosive championship could be an atmosphere where the pair will be able to flourish, and show what they can do in a car that is capable of going for glory.