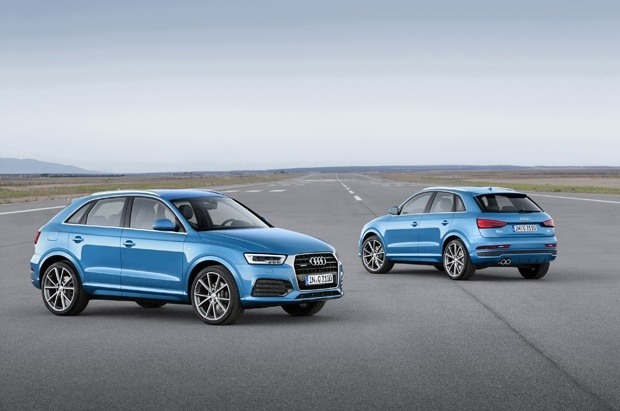 In a world of small crossover vehicles populated by such luminaries as the Nissan Qashqai, BMW X1, Range Rover Evoque, MINI Countryman and Volkswagen Tiguan, the Audi Q3 certainly holds its own with an even sharper new look, more equipment and a more efficient EU6-compliant engine range.

And now it is available to lease in 22 different versions from Nationwide Vehicle Contracts. Have a look here for more details and for what is on offer.

Both the Q3 and the flagship RS Q3 have both been drastically improved with the design team at Audi given the unenviable task of reworking and improving upon the already successful model with particular attention to  be given to styling, safety, efficiency, equipment and power - but they have managed it. 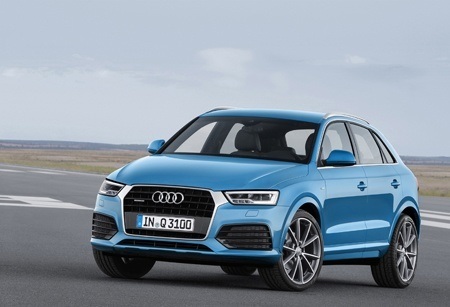 No matter which specification model you are looking at with the Q3 - SE, S line or top flight S line plus - the premium quality of the car is evident right from the start.

Previously existing characteristics like the coupe-like lines and wrap-around tailgate are still there, but have been added to and enhanced by a striking new 3D effect Singleframe grille, revised bumpers and new look alloy wheels.

The full body-colour paint finish which previously was only standard for S line versions and above has now been extended to all models including SE.

And the headlights have also been revised in line with many of its competitors with the addition of xenon bulbs and LED daytime running lights as standard in SE versions, complemented at the rear by reworked LED tail lights. Further up the model scale with S line and S line plus specification levels we find that the headlights have been upgraded to all-weather LED headlights and dynamic ‘scrolling’ rear indicators.

Looking under the bonnet 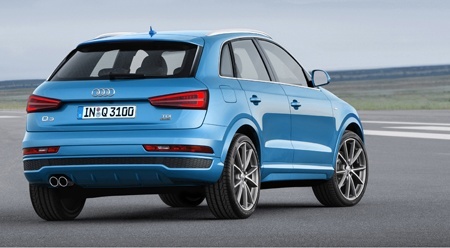 Not every engine you look at could be described as beautiful, but the two TDI clean diesel and three TFSI engines that exist in the of the new Audi Q3 models have near-beautiful performance. By this, we are talking  higher power outputs, improved fuel economy, CO2 reductions up to 17% and EU6 emissions regulations compliance.

All the new engines are stars in their own right, but the one that seems to be shining brightest in headlines  is the 1.4-litre TFSI petrol engine with Cylinder-on-Demand technology. Having first taken a bow in the Audi A1 and A3 ranges, it makes its Q3 debut complete with 150 PS and the option of either manual or S tronic twin-clutch automatic transmission. This gives the exclusively front-wheel-driven Q3 1.4 TFSI an acceleration statistic from 0-62mph of 8.9 seconds when using S tronic, whilst at the same time allowing fuel economy of up to 50.4mpg in manual based on the combined cycle test.

Also up there high in the petrol ratings for the Audi Q3 is the 2.0-litre TFSI unit that can also be linked to either manual or S tronic transmission, and is allied to quattro all-wheel-drive with an increase in power from the outgoing Q3 to 180PS.

The third petrol option is a sonorous 2.5-litre five-cylinder TFSI that is only found in the flagship Audi RS Q3 where its 30PS power upgrade to 340PS helps to increase sprint performance to 4.8 seconds - a 0.4 second drop - yet still maintains an impressive 32.8mpg fuel economy.

Moving on to the diesel options we find two four-cylinder TDIs, both with increased outputs of 150PS and 184PS.

The 2.0-litre TDI SE offers the 150PS output along with manual transmission and 17" alloy wheels; and boasts improved fuel economy of up to 61.4mpg and CO2 emissions of just 119g/km. Just behind this economical flagship we find the S line version with 18" alloy wheels, 60.1mpg and 122g/km emissions. Both models also quote improved 0-62mph times of 9.6 seconds.

Both engines can work with either manual or S tronic transmission with the 2.0-litre 150PS TDI engine channelling output through either the front wheels only or through all four via the quattro system that operates solely in the 184PS version. 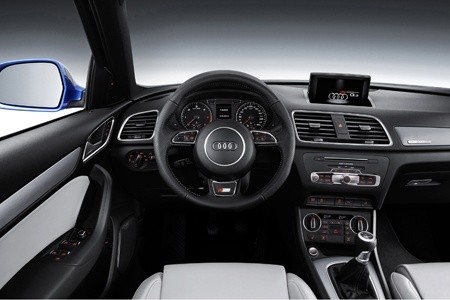 In the redesigned Audi Q3 fine-tuning the chassis and fitting the previously optional extra of the Audi drive select adaptive dynamics system (which enables the driver to adjust key technology modules to suit their own personal preferences) has helped refine the drive even further than thought possible.

There is space for up to five adults can enjoy ride, with those in the front sport seats able to enjoy it even more thanks to the four-way electric lumbar support that are standard for S line and S line plus models.

Other Q3 features that add to the internal ambiance include:

Moving ahead from the SE standard specifications, in addition to its LED headlights, five-spoke design 18" alloy wheels and exterior and interior styling enhancements, upgrading to the S line model gets you cloth and leather combination upholstery for the sports seats and the option to specify S line sports suspension in place of the standard set-up at no cost.

There is also a wide variety of safety and comfort-enhancing features available as optional extras, including Audi side assist, Audi active lane assist and a camera-based traffic sign recognition system. 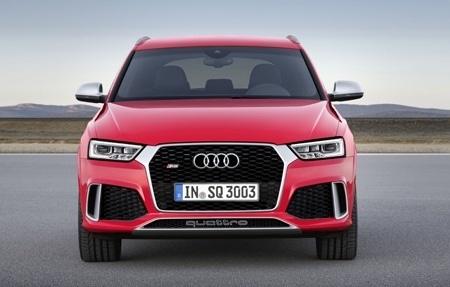 Right at the top of the tree when it comes to the Q3 range is the RS Q3 compact performance SUV that has also been upgraded to make it more purposeful than ever.

The 2.5-litre, five cylinder engine now produces 340PS and 450 Nm of torque and now accelerates from 0-62mph in just 4.8 seconds up to an electrically-restricted top speed of 155mph. And with all this power, somehow it now satisfies the Euro 6 standard.

As befits a car with the special status of the first ever Audi SUV to wear the RS badge, the RS Q3 boasts RS-specific body detailing  that includes:

For more details of the leasing details available from Nationwide Vehicle Contracts on all versions of the new Audi Q3, visit the Audi Q3 leasing page.